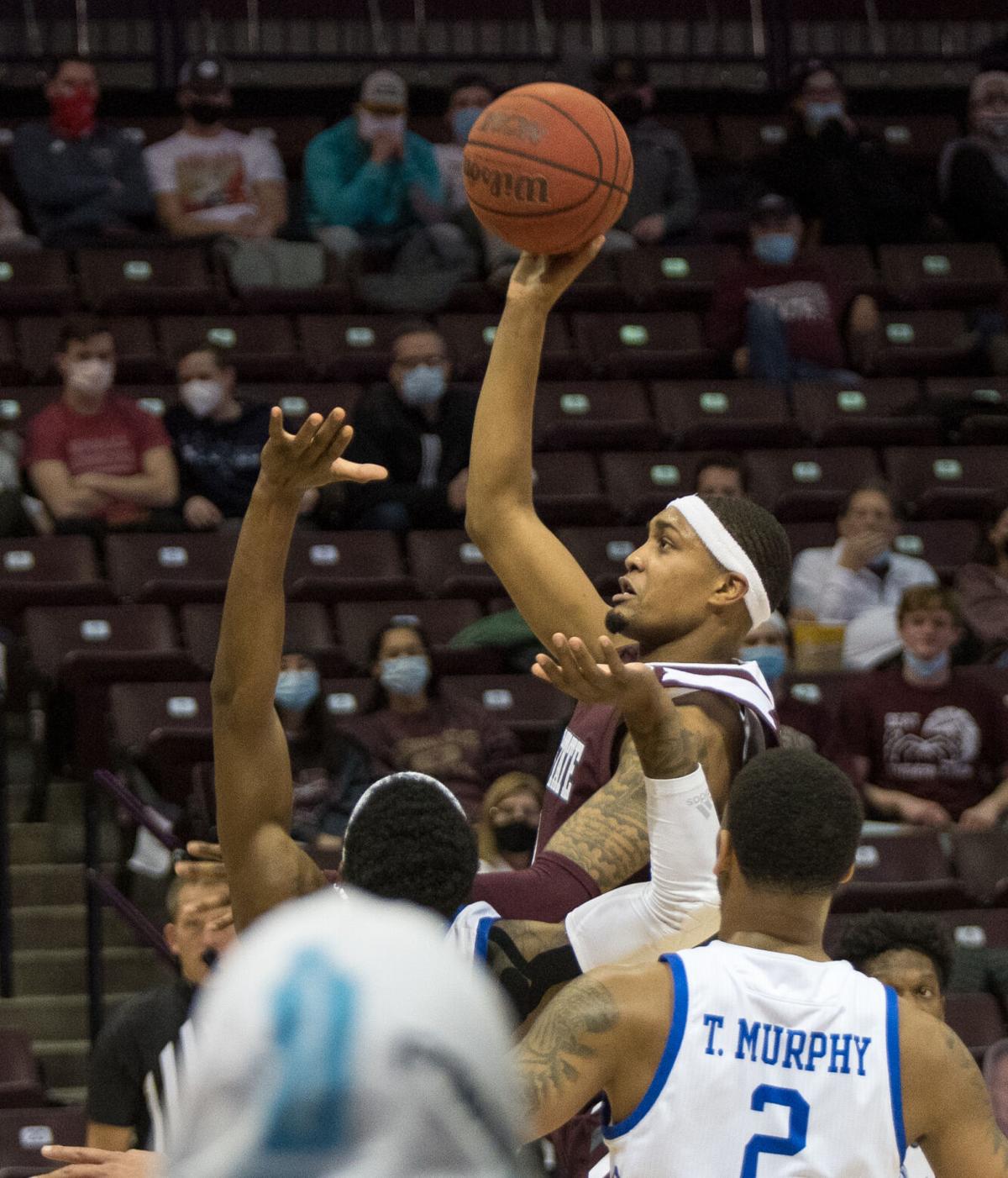 MSU’s Isiaih Mosley going up for a shot in the lane against Drake in the spring of 2021. 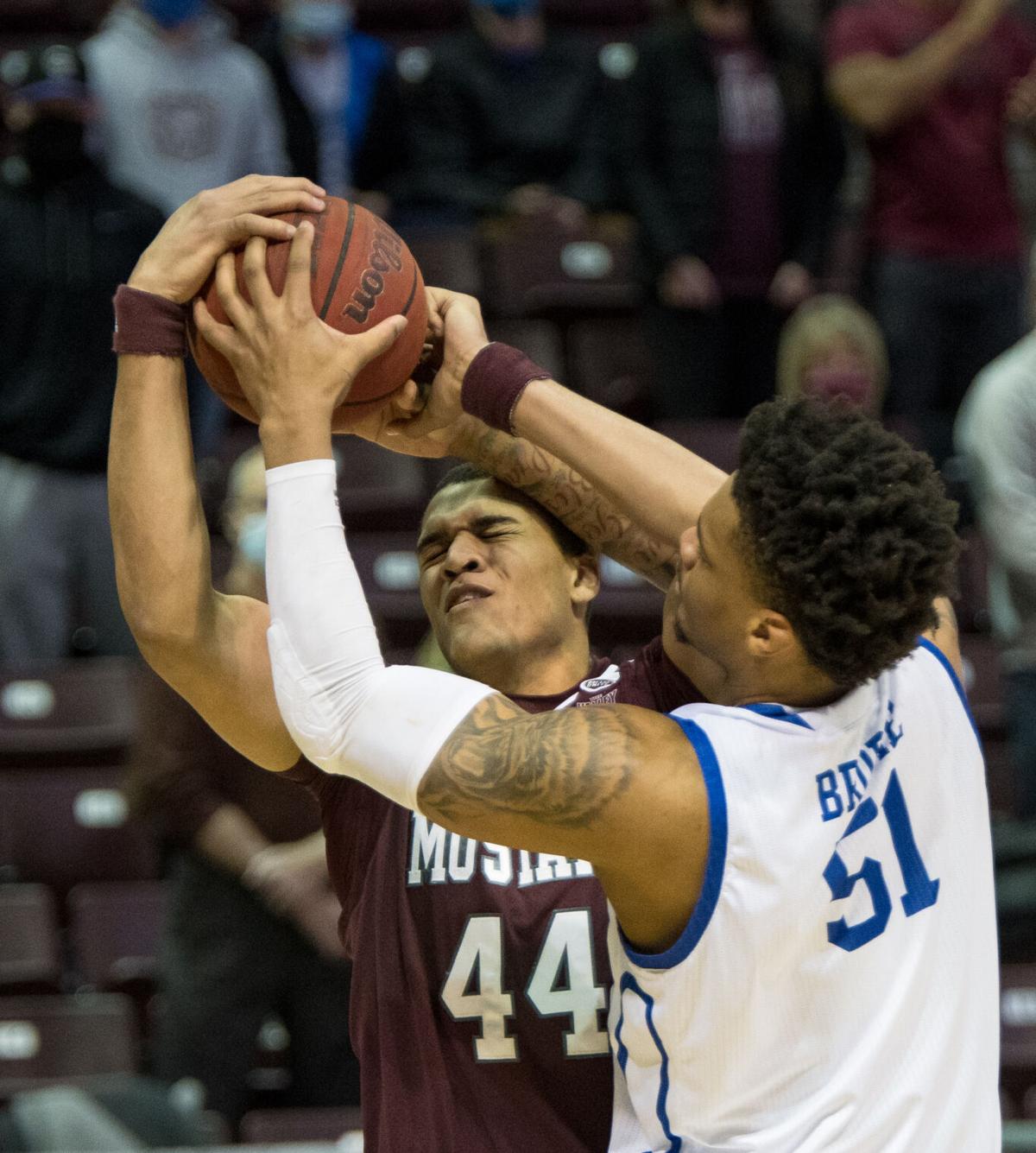 Drake forward Darnell Brodie stuffing Missouri State’s Gaige Prim. Brodie is one of the tallest, most physical presences in the Missouri Valley Conference.

MSU’s Isiaih Mosley going up for a shot in the lane against Drake in the spring of 2021.

Drake forward Darnell Brodie stuffing Missouri State’s Gaige Prim. Brodie is one of the tallest, most physical presences in the Missouri Valley Conference.

Welcome to my favorite thought experiment I’ve been able to do in awhile. With no real games to write about in the preseason, I thought I would drum up something interesting to read.

Inspired by the things produced by Sean McIndoe (Down Goes Brown) at The Athletic, I tried to put together the best starting five in the Missouri Valley Conference.

One catch — their last names have to rhyme. And they have to be good enough to score on Loyola-Chicago, defend Missouri State’s offense and ultimately win a title.

This team will play a full Valley schedule as a new team. For the purposes of the experiment, the players I select will more or less be clones, with the originals still playing on their current teams.

Let me introduce you to the next best thing in college hoops.

As if I would not find a way to put the Valley’s leading scorer on this team.

This was one of the no-brainers — in fact the MSU scoring wing was the person I started with. Mosley led the Valley with 19.8 points per game a year ago, and was one of the few things that consistently worked for Dana Ford’s offense. He was named to the MVC’s first-team last year, in conversation for mid-major player of the year in multiple outlets and is a member of the preseason All-MVC team.

Ford described Mosley in the MVC’s media day as a player that can bail an offense out with their shooting. That is something Ford has relied on often. At times last year when the Bears struggled to do anything remotely related to scoring — and the ball went to Mosley. He’s a pure ISO scorer.

Mosley will not handle the ball for this team, but play a No. 2 guard role where he occasionally does. He’s good enough to play at schools like Kansas and Gonzaga, so there’s no reason he can’t play for me.

Meet my team’s point guard. Is he necessarily a point guard? No. He’s a scoring guard. But the nice thing about scoring guards is they have the ability to handle the ball. Honestly, most of the guards on this list can also do that.

Key is going to end up somewhere near the top of Indiana State’s all-time scoring list at the end of this season for the Sycamores. He shoots just above 31% from behind the arc, which will also give him the bail-out quality Mosley brings. He was a MVC First-Teamer last season.

The biggest reason why he’s here boils down to a singular performance last year. The man put up 31 points against Loyola Chicago on Jan. 10. The Ramblers only let five other players score more than 20 last year and were fourth in the nation in defensive efficiency.

And for a team designed to score on Loyola Chicago, who better to do that than someone who dropped 31?

Kennedy has been probably the best sixth man in the MVC for two years now. He gets a bump up to a starting role with us. For all of the firepower Key and Mosley bring, Kennedy does his work in a quieter way.

He can still score. Kennedy averaged 7.2 points per game and 3.6 rebounds last year. He also had a 49% shooting percentage, which is really good for someone who had almost 150 attempts. Kennedy has proven big-time capability. When the Ramblers upset No. 1 seed Illinois in March Madness last spring, he had 14 points and a pair of blocks. His 14 points were second on the team, behind the MVC Player of the Year Cameron Krutwig, who had 19.

Harvey is another member of Key and Mosley’s supporting cast. He’s still good, but he hasn’t been the alpha in Carbondale yet.

Harvey came in last year as a redshirt sophomore after sitting the previous season due to NCAA transfer rules. He was bumped up to a starting role for the Salukis around the time MVC play began and rewarded Bryan Mullins with 9.7 points per game.

Harvey is strong on the drive, which is nice to have. If he can add some assists to his stat line — he averaged 1.5 a game last year — he can help spread the love. Passing the rock will be something to really worry about for this team in big games.

Welcome to the most controversial pick on the team. We are running a four guard, one big setup, so there’s only one spot for a forward. The more obvious pick would be Drake’s Tremell Murphy — great big man with an “ie” noise at the end of his name. Murphy has a better scoring touch than Brodie has, but let me tell you why Darnell Brodie is the only choice.

This league will have some tough matchups this year, but the biggest one is how teams will deal with Missouri State’s Gaige Prim. Other names that didn’t make the all-rhyming team, like AJ Green and Roman Penn, are all small enough to have someone else on the team guard them. But Brodie is 6-foot-10-inches and 275 pounds. All of that muscle, too. I want him when my team rolls into Springfield.

Last season when Drake swept MSU in a two-game set in Springfield, Brodie played nearly 35 minutes in the first contest — a lot of it spent on guarding Prim. He played less the next night, but again, guarded Prim.

Prim still managed to score 18 and 20 points in the two games, he is just that good. I do not think there is a single player who can shut him down.

What Brodie brings is a physical presence that will make the MSU big-man work really hard in games. It’s not a surefire thing, but with all the scoring on the team already, having one player who can sell-out defensively will be worth it.

Why this team can win the MVC

We can score on anyone, and we’ll do it to you in front of your own fans. Key and Mosley have not been truly shut down by a defense since they’ve become leaders in the MVC scoring races, and that will continue here. Our guards are capable of taking over a game for significant stretches. Our main offense: Give the guys the ball and let stuff happen.

Why this team can’t win the MVC

WE LOVE ISO BALL. This is something that Missouri State ran into trouble with in the 2019-20 season. Dana Ford put together a roster with a lot of talent, but they never quite figured out how to play as a team for significant stretches.

Both Mosley and Key can be dominating presences on the floor, which is not always good in tandem. Mosley had possessions last year start and ended with him keeping the ball. It works to score points, but it does worry me some.

Loyola Chicago may have lost coach Porter Moser to Oklahoma, but apparently their defense is still fantastic. They beat Wisconsin in a closed-doors scrimmage according to people with knowledge of the event, all while having nine players play 10+ minutes each.

If we can have some people go off in those games, it’ll be a perfect 20-0 conference schedule.

On Nov. 12, Jordan Valley Community Health announced they will be opening a new clinic for w… Read more