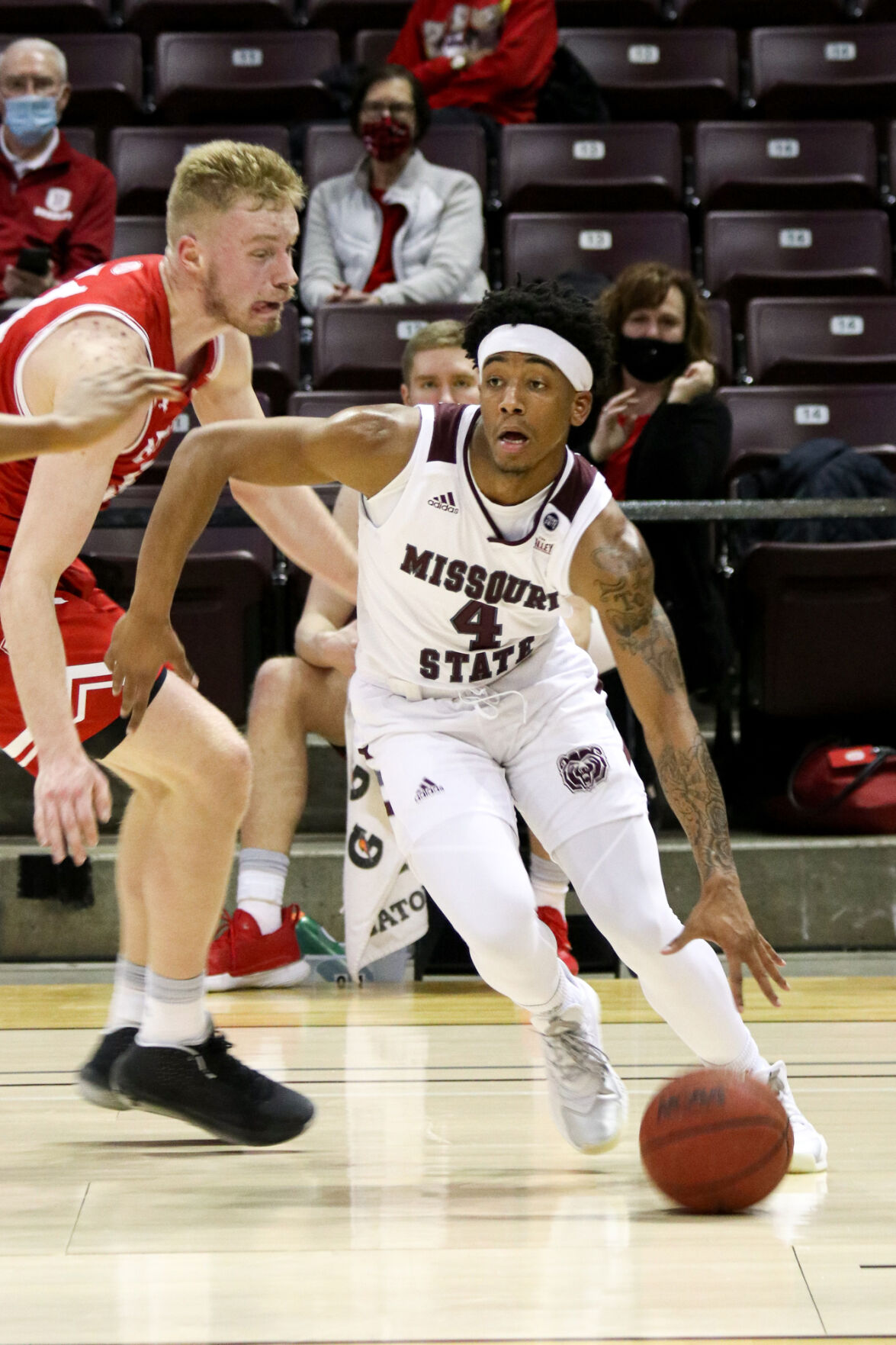 Junior guard Ja’Monta Black drives the baseline against Bradley in February 2021. Black was high school teammates with Mosley, and the two guided Rock Bridge high school, in Columbia, Missouri, to a state title. 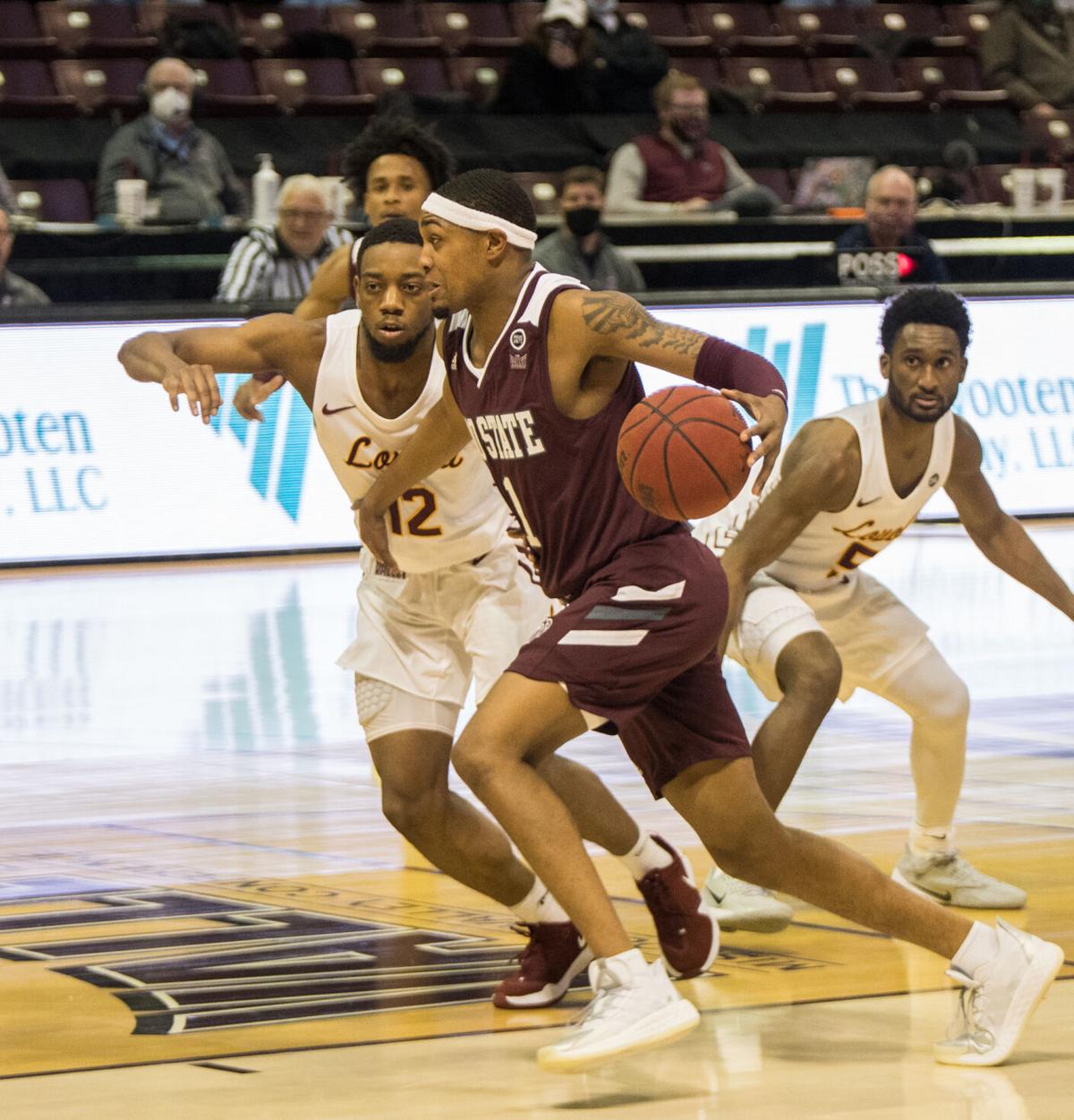 Junior guard Isiaih Mosley drives on a Loyola Chicago player in January 2021. Mosley was one of the best players in the nation last season, and told The Standard he wants to do more for the Bears this year.

Junior guard Ja’Monta Black drives the baseline against Bradley in February 2021. Black was high school teammates with Mosley, and the two guided Rock Bridge high school, in Columbia, Missouri, to a state title.

Junior guard Isiaih Mosley drives on a Loyola Chicago player in January 2021. Mosley was one of the best players in the nation last season, and told The Standard he wants to do more for the Bears this year.

It is not a tournament or bust season for head coach Dana Ford and his team, but there’s a good shot the Bears could go dancing in March.

Last year the Bears were one of the surprise teams in the Missouri Valley Conference, finishing in third place. They almost made it to the conference championship game, but a last-second shot by Drake sunk the season.

This year the Bears return with nearly everyone from a year ago, and two big name transfers will augment what they already have.

The starting roster is not set, but the scoring is going to start with junior guard Isiaih Mosley and fifth-year senior forward Gaige Prim.

Mosley rampaged onto the Mid-Major scene last season, where he averaged 19.8 points per game and was first in the MVC with 20.1 points per game in conference play. Mosley can score from any part of the floor, and he has the ability to bail out the Bears’ offense on tough possessions. He wants to do more for the team this year.

“I think I can shoot the ball better,” Mosley said. “I think I can be better on the defensive side, on-ball and off-ball. I think I can get more rebounds, and I think I can be more physical. When you go to the lane you will be getting bumped. (Defenders) love to foul you with their chest right now. You have to understand that the physicality in basketball is pretty high right now. The refs are letting the guys play.”

Prim was the other driver of the Bears’ offense a year ago, and he’s efficient around the basket. Last year he had a .599 field goal percentage, which was No. 10 in the nation. His 6-foot-8-inch frame allows him to compete with nearly everyone in Division I hoops near the basket, plus he has a clean jump shot.

Prim looks to be the consensus best big-man in the MVC since Loyola Chicago’s Cameron Krutwig graduated in the spring.

The Bears also bring back starting senior point guard Demarcus Sharp, who moved his way into the starting roster last season and is now the team’s de facto floor general.

“Having (Sharp) as a point guard makes everything easier,” Prim said. “There’s not a lot of people that can stay in front of him. He gets downhill and right to the bucket. The best part is he gives me spoon-fed baskets.”

The other returning starters, junior guard Ja’Monta Black and senior guard Keaton Hervey will likely continue in their role as supporting players who can occasionally take over a game.

The new faces for the Bears will have a big impact. Junior transfer Donovan Clay comes in from Valparaiso and looks to play both guard and forward. He was named to the MVC All-Freshman team in his first year with the Beacons. In a preseason scrimmage the Bears held in October, Clay showed ball-handling skills on-par with Mosley, and he has the ability to play more like a traditional center.

“We so desperately needed his versatility, his athleticism, his upside,” Ford said. “Then you add on the fact that (Mosley) was the top recruiter for him. If (Mosley) wants somebody on your team — then they going to be on your team.”

Ford also said he is confident in new players’ abilities to mesh with the team. Two years ago, most of the Bears’ roster was made up of transfer players with big play ability, and MSU was picked to finish first in the MVC preseason poll. Chemistry issues plagued the team all season and they ended up finishing sixth in the MVC.

Ford said he does not think that will be an issue this season.

“This time with the transfers we learned from some of our — I don’t want to call them mistakes — but we learned from the past in regards to mixing the team the right way,” Ford said. “(Clay) is a Valley guy. So if I’m saying ‘this is how the Valley is,’ he’s not looking at me like I’m full of hot air. Knowing that really helped with deciding to add him.”

All of this will have to be tested against a MVC group that also did not lose much. The Bears were picked to finish fourth in the league’s preseason poll.

Loyola won the league last year and made a deep NCAA tournament run. Head coach Porter Moser departed for Oklahoma in the off season, but he was replaced by his assistant Drew Valentine. Reports out of a secret preseason scrimmage the Ramblers held against Big 10 school Wisconsin say the team will still be tough.

Drake also made the NCAA tournament and upset Wichita State in the first round. The Bulldogs were without a few key players due to injury when they made the tournament run, including preseason All-MVC pick Roman Penn, who is now healthy.

Northern Iowa is another top school. AJ Green returns for the Panthers after missing last season with a hip injury. He was the MVC Player of the Year in 2019-20 and the preseason POY before the injury.

The Bears will have to play their best ball all year to make the tournament. It will start on Nov. 9 against Southeast Missouri State.

On Nov. 12, Jordan Valley Community Health announced they will be opening a new clinic for w… Read more