After living on the Missouri State campus for two years, Facklam was ready to make the switch to her own place. She and her roommate moved into Coryell Crossing Apartments, located on the corner of Kansas Expressway and Sunshine Street before the fall 2019 semester began.

Facklam loves her new place and said it feels like home. It only takes her about 15 minutes to get to campus, and she enjoys that Coryell Crossing has a lot of college-aged residents.

But it hasn’t been easy. There’s plenty that she wishes she knew before deciding to move off-campus.

“This year has been the hardest just because I’m more on my own,” Facklam said. “[I’m] living on my own in an apartment and I’m paying rent. It’s like, ‘oh, crap, I can’t just spend money. I have to save it.’”

Facklam’s rent is $450 a month, and she splits that payment halfway with her father.

“I’m very glad that I have that support,” she said.

While $225 of Facklam’s monthly earnings go to rent, she has other financial obligations. Nearly all of her money goes to pay for rent, utilities and gas, she said.

“You have to be responsible with money,” she said. “Having a budget is very important, and I wish I knew to do that before.”

Ericka Peppers works as a marketing manager at a number of properties including Bear Village, a student housing complex located just west of campus on Kimbrough Avenue.  She said plenty of students struggle with rent and other contractual obligations.

“I think (students) know that they’re signing up for a monthly agreement, (but) knowing I have to pay my $600 rent every month can be a huge shock if you’ve never done it,” Peppers said.

She said late fees often incur for Bear Village residents simply because the monthly payment is out of sight and out of mind. However, Peppers considers student housing a great “purgatory” between on-campus living and adult housing because all the bills associated with living there are combined.

“Bear Village is just an awesome step in-between because you get that independence; you get to come and go as you want,” Peppers said. “But all those bills (are) lumped into one payment, one contractual agreement, instead of having to go to City Utilities and having to go to Republic Trash and going to AT&T and all those different things.”

Of course, Facklam’s financial obligations aren’t the only thing she wishes she knew before taking the leap off campus.

Since Facklam and her roommate are two young women living on their own for the first time, this can come with its own unique challenges that require extra steps to stay safe.

When she was growing up, Facklam’s father was always the one to lock the doors and turn off the lights before going to bed. She said it’s a big change to learn to do those little things.

As another safety measure, Facklam always calls her roommate when she’s on her way home after a late night. She does this out of courtesy to make sure she doesn’t startle her roommate upon entering their home, but she also does it as an accountability measure: Facklam wants her housemate to know when she expects to be back in case something happens.

Another way the two stay safe is with a guard dog. She said her roommate’s Labrador retriever, Beau, is ready to defend the home from any unwelcome guests.

A pet may sound like a great way to make a house feel like a home, but Peppers gives a word of caution to her residents at Bear Village.

“If you don’t have time – if you have a full school schedule and you have a full workload, you should not have a pet,” she said. “It is a commitment. I feel really bad for some of these dogs because residents will leave them for hours and days on end.”

Peppers said it’s not fair to the furry friend when the owner can’t commit to being a pet parent.  She advises students to wait until after college when they can devote more time to having a pet.

“Don’t sign up for a commitment if you’re not able and ready to fulfill the terms of the commitment because it’s just not fair to the pet, and it’s really not fair to the apartment,” Peppers said, citing floor and furniture damage that she frequently sees in resident apartments.

Thankfully for Beau, Facklam and her roommate have different break times throughout the day to give him attention.

“He gets to play all the time,” Facklam said.

Even if residents don’t have dogs, Facklam said there are plenty of other measures students can take in order to stay safe. One often overlooked element is choosing the right roommate.

“I think who you have as a roommate is a big part,” Facklam said. “Are they responsible? Are they doing to lock your doors? You have to trust the person you live with.”

She said it’s okay to have non-negotiables.

One of the biggest tips Facklam said she can give to stay safe is to not leave cars unlocked – and to not leave valuables in the car.

“One of the problems that arise is that sometimes students are a little too trusting, and they’ll leave their car doors unlocked,” Peppers said, citing a high occurrence of reported break-ins in the area.

She said the biggest concern for everyone working for Bear Village is safety. She explained the complex keeps its residents safe through the use of security officers, 24-hour locked doors and a “buzz-in” system for guests.

Peppers said she wants her residents to feel that same safety they felt while they lived on campus.

While safety is Peppers’ biggest concern, she knows there are a lot of other things students should know before making the decision to move off-campus.

Practicing cleanliness and not being afraid to ask questions are at the top of that list.

“I wish that students would give some attention to what it means to ‘adult,’” she said.

Facklam is optimistic about her living situation, despite all the learning she’s had to do.

“I think I’ve gotten into the groove for sure,” she said. “At first it’s tough, but after a while I got used to it.” 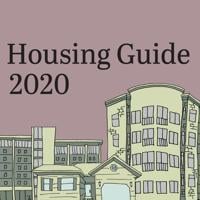