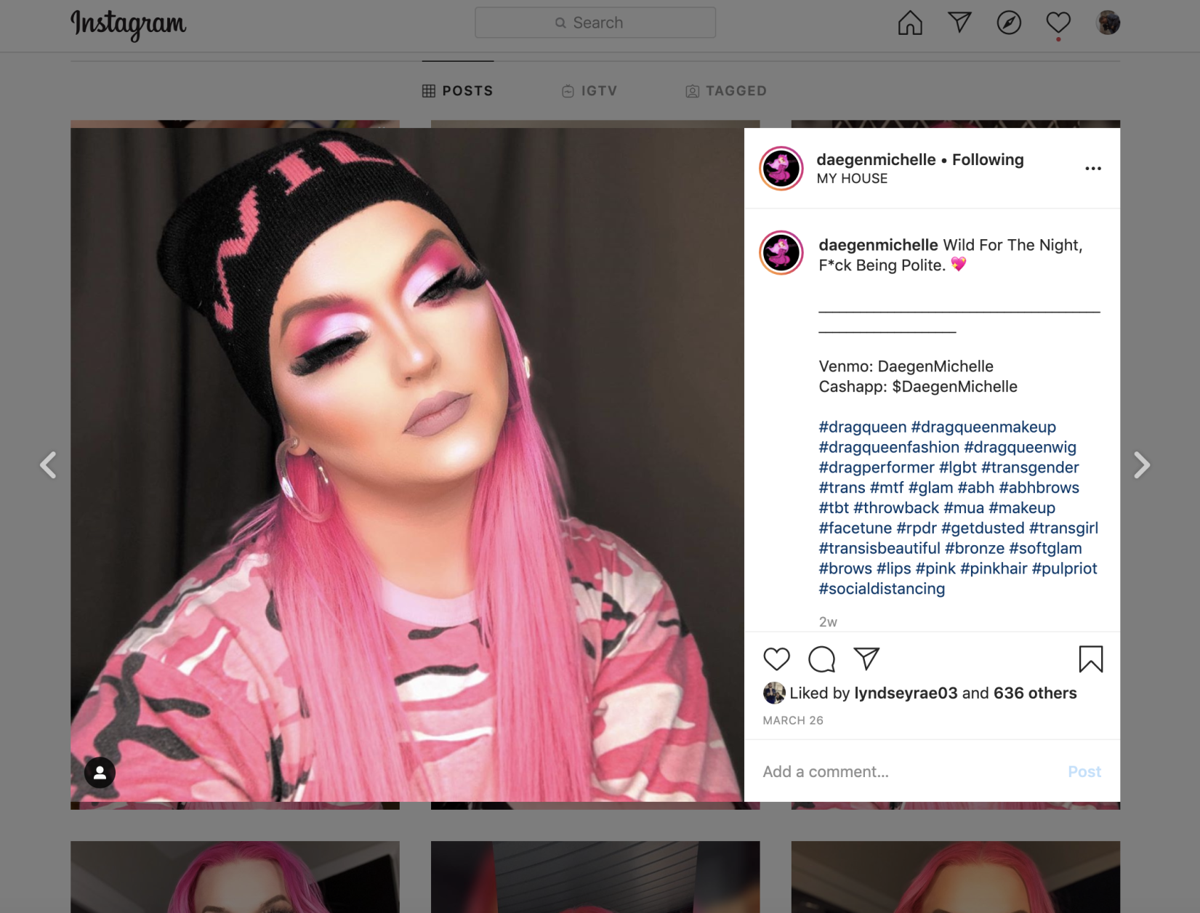 Daegen Michelle, a full-time drag queen based in Springfield, poses for a photo in her "No Air" parody music video outfit. Michelle plugs her Venmo and CashApp usernames on her social media. Michelle can be followed on Instagram @daegenmichelle. 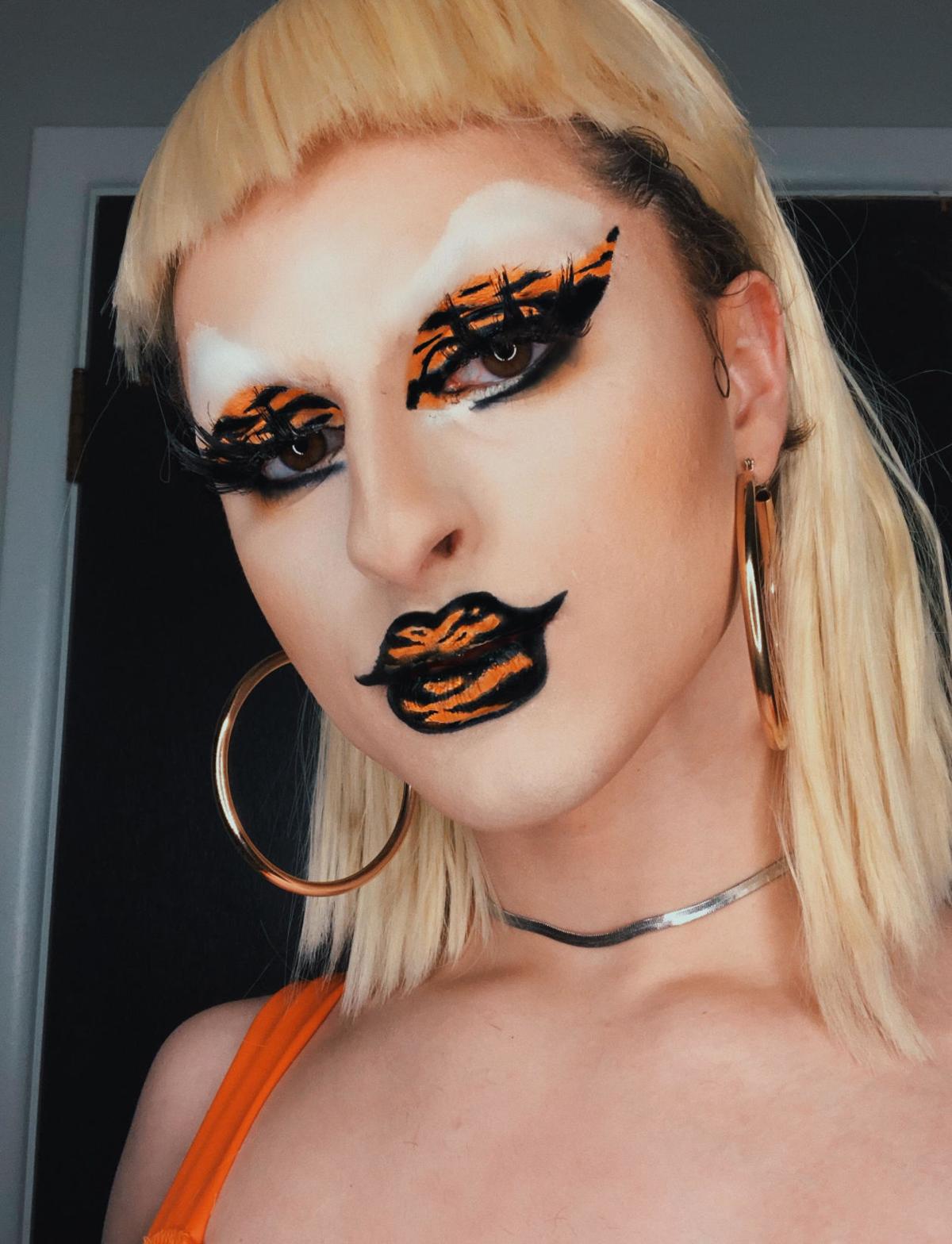 Jimmy Anti, a Springfield drag queen, snaps a selfie in her "Tiger King" inspired look. Anti can be followed on Instagram at @jimmyanti.

Daegen Michelle, a full-time drag queen based in Springfield, poses for a photo in her "No Air" parody music video outfit. Michelle plugs her Venmo and CashApp usernames on her social media. Michelle can be followed on Instagram @daegenmichelle.

Jimmy Anti, a Springfield drag queen, snaps a selfie in her "Tiger King" inspired look. Anti can be followed on Instagram at @jimmyanti.

Drag queens depend on physical interactions entirely, as the majority of the money they make is from tips.

To comply with the order, many people are working remotely, while others, like drag queens, are completely out of a job.

Jimmy Anti, a Springfield drag queen, has been doing drag for two years. She said she’s felt a financial loss and a loss of her community over the last few weeks.

“Queer people have queer spaces because we don’t always feel welcome in straight or mainstream places,” Anti said. “Our community is important to me because being with people who are like you is affirming. School is closed, work is closed and our queer community can’t meet at drag shows like we usually do.”

Anti said she is able to spend the extra time at home working on new looks but getting ready as a drag queen takes a lot of materials, which have been difficult to physically obtain and purchase.

“I’ve worked on some looks and I have some things I’m planning, but making money with drag, especially in Springfield, is hard,” Anti said. “Especially with the state of the world right now.”

Founder of Get Dusted — a monthly drag show in Springfield — Crystal Methyd created a virtual show for fans to enjoy from home: “Get Dusted: The Movie.”

After the opening performance video, Methyd welcomes her fans to the virtual drag show.

“The girls and I could not just sit back and let Get Dusted crumble away,” Methyd says in the video. “We’ve never missed one. We’ve been doing it every month for four years.”

Johan Collins, co-owner of Get Dusted with Methyd, said although he was not involved with the making of “Get Dusted: The Movie,” as the queens filmed their videos individually to practice social distancing, he thought the idea was great.

Collins said many drag queens are facing difficult situations, as their reality changed so quickly.

“We went from having a sold out show every single last Saturday of the month to nothing,” Collins said. “It’s been really impactful. Some of these girls, like Daegen Michelle, this is all she does, drag.”

Michelle has been a drag queen for seven years, which her income relies on entirely.

Michelle said she is able to make money by posting her Venmo and Cash App usernames on her social media and the amount of money she made from “Get Dusted: The Movie” was comparable to what she makes in tips in-person at Get Dusted shows.

For the “movie,” Michelle created a parody of the “No Air” music video, which includes Jordin Sparks and Chris Brown. Michelle said she had help from her roommate to film the video, who happens to be Jimmy Anti.

Despite current circumstances, Collins said he believes the drag community in Springfield will be bigger and better than ever, once life returns to normal.