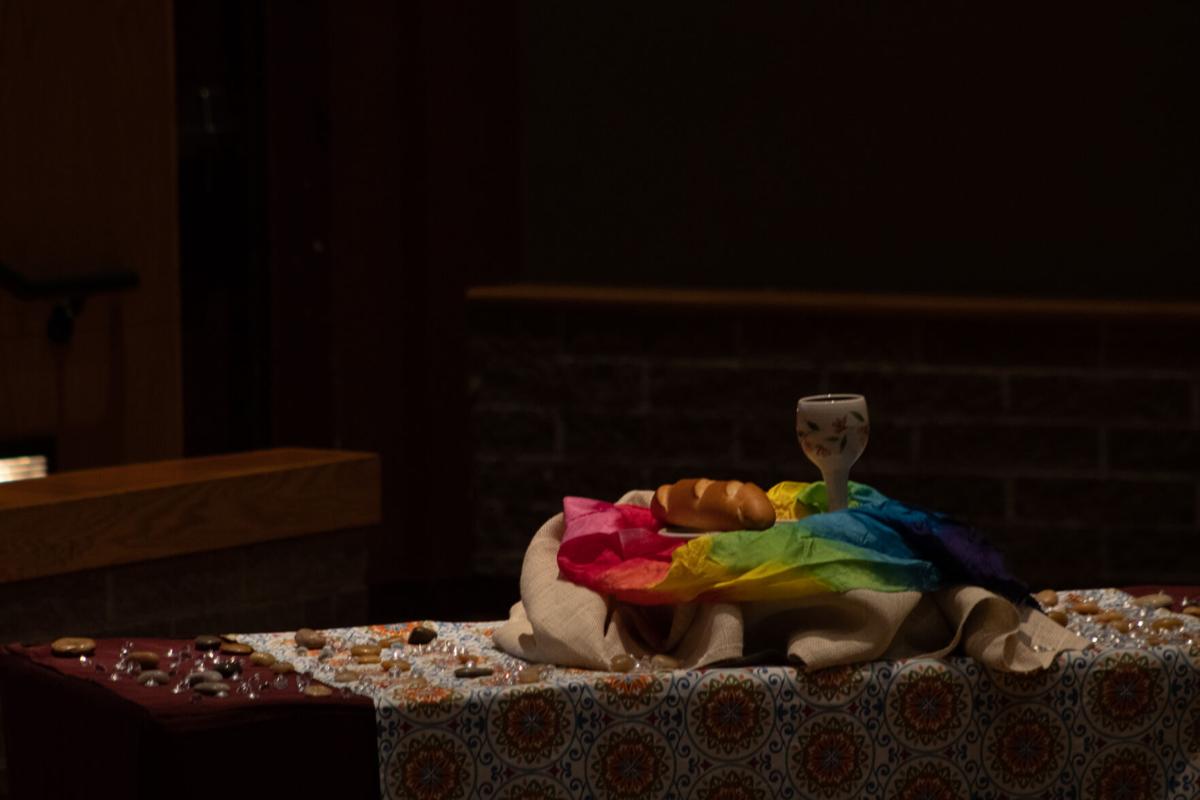 A small decoration put up for the service rests on stage at the PSU on Oct 10. 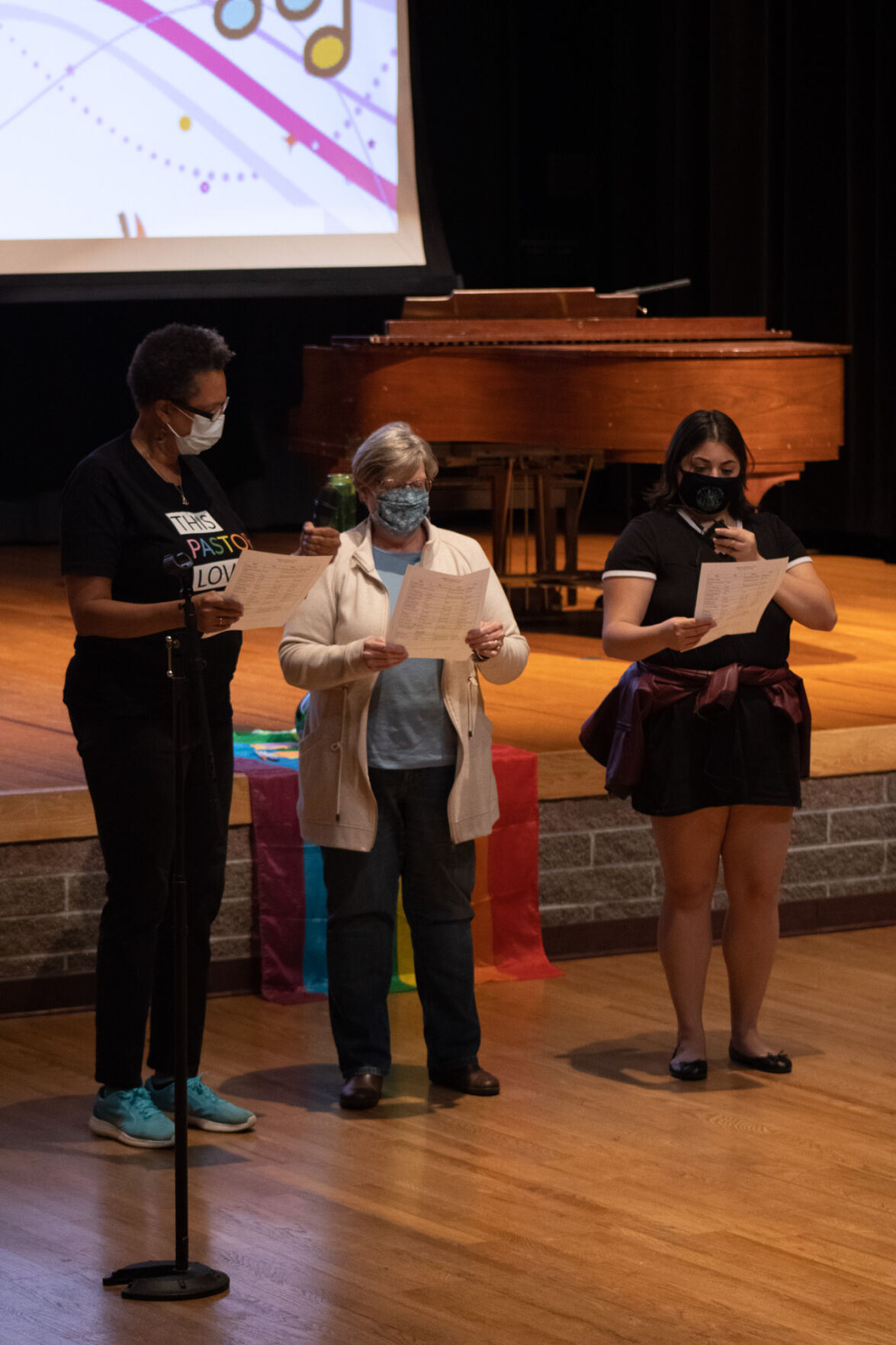 From left to right: Tracey Wolff, Lisa Clark, and Raisa Hurtado,Theatre Studies senior, speak to the crowd in the PSU on Oct 10.

A small decoration put up for the service rests on stage at the PSU on Oct 10.

From left to right: Tracey Wolff, Lisa Clark, and Raisa Hurtado,Theatre Studies senior, speak to the crowd in the PSU on Oct 10.

In lieu of the Ozarks Pridefest that was to take place in Springfield on Oct. 10, the Ekklesia campus ministry held a sermon in the PSU dedicated to the causes of pride and protest.

The sermon was hosted by Michelle Scott-Huffman, an ordained minister from the Christian Church Disciples of Christ. Scott-Huffman has been with the Ekklesia ministry since January 2018, and the ministry has been on campus since 1961.

Ekklesia is a Greek word meaning “a community called together for a purpose,” Scott-Huffman said. “We used to be one of about 10 united campus ministries, so the students wanted a name that they relate to more. They got together and did term studies from the bible and chose Ekklesia as the word that embodied who they want to be.”

The sermon included prayers, poems, hymns and testimonies on the subjects of finding faith in Christianity, regardless of sexual orientation or gender alignment. Speakers included guest pastors and Ekklesia’s student leadership.

“My life does not need to be explained. I am free,” Cidney Grimes, Ekklesia’s president and LGBTQ+ peer minister, said.

“To me, being free is letting go of all expectations, no longer fixating on the past or what should have been – realigning,” Grimes read during the sermon from her poem, “Free.” “A life of freedom for me has no opposition, no oppressor is in my story.”

“We used to have one peer minister, and it was typically a person who was involved with Ekklesia and knew they wanted to be involved in seminary someday,” Scott-Huffman said. “I thought, ‘What if we cast a broad net and advertised in the career center and other places to see who we could gather and what their skills are?’” Ekklesia now has five students working as peer ministers.

“We named the service ‘Liberate’ to be a connecting point between members’ faiths and the movements for racial and social justice,” Scott-Huffman said. “We’ve talked every week, including a response session discussing what you would put on a protest sign about racial justice, housing justice or other issues.

Scott-Huffman said she believes those who identify within the LGBTQ+ community always have something to protest, whether it be workplace accommodations or the Don't Ask, Don't Tell policy that prevented openly gay military members from serving until 2011.

“For people who identify as queer or are in some way aligned with the LGBTQ+ community, just showing up in faith spaces and rejecting the message that they are sinful and broken is an act of protest,” said Scott-Huffman.

“Being a multi-ethnic ministry, we’re definitely aligned with Black Lives Matter, as well as any LGBTQ+ movement,” Scott-Huffman said. “We pray with our feet in the streets for whatever’s needed.”

Other events Ekklesia is participating in during October for LGBTQ+ History Month include a safe-zone training seminar, which gives participants placards for completion, and the Kings and Queens of the North Mall drag show on Oct. 23.

To accommodate COVID-19 restrictions, the 50-minute service was live-streamed on Ekklesia’s Facebook and Instagram pages. It also featured guest recordings from the pastor of Marshfield Christian Church and several others. According to Scott-Huffman, the entire service will be uploaded to Ekklesia’s Youtube page for viewing soon.