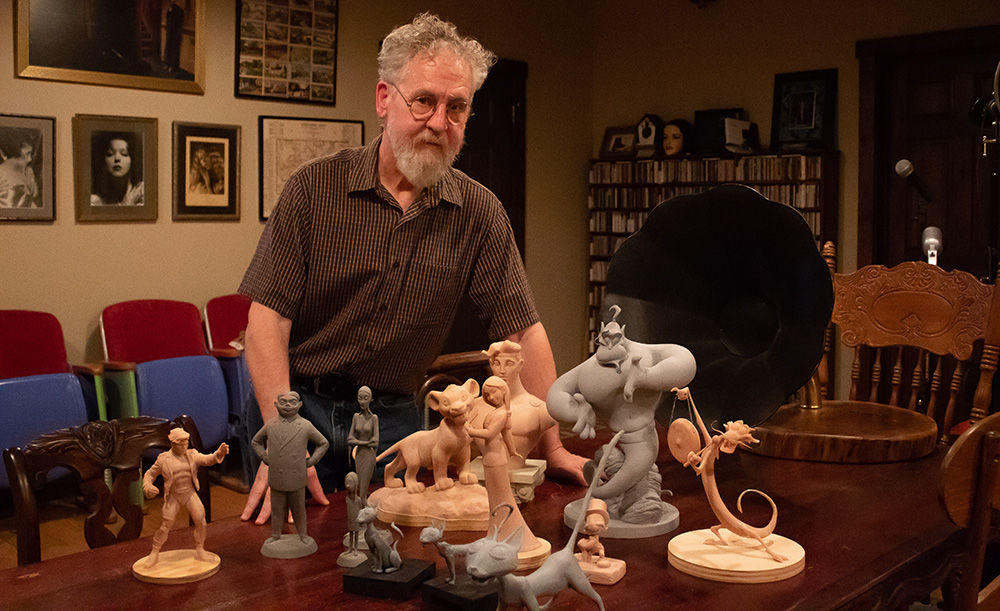 Kent Melton poses with a table full of his sculpture work for films from Disney, Universal and Laika production studios. His studio, located in Cape Fair, Missouri, is full of the sculpted characters. 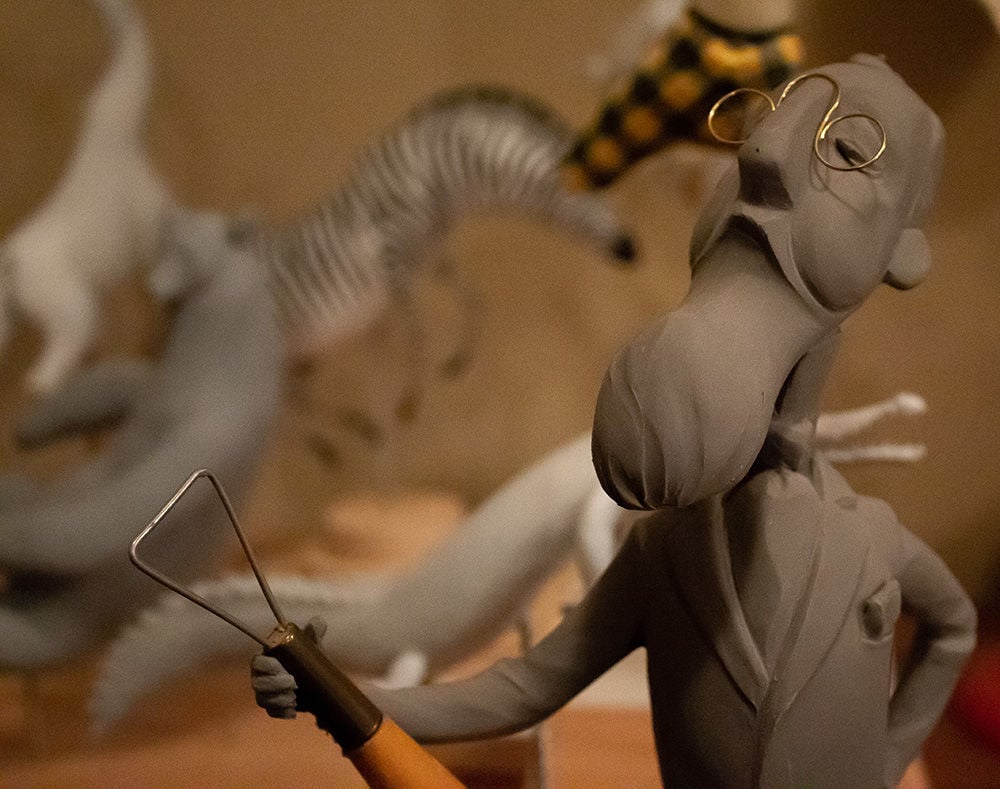 When a Smithsonian exhibit asked for a photograph of himself, Kent created a “self-portrait” sculpture. Kent’s work has been featured at the New York Museum of Contemporary Art, the Smithsonian Institute and more.

Kent Melton poses with a table full of his sculpture work for films from Disney, Universal and Laika production studios. His studio, located in Cape Fair, Missouri, is full of the sculpted characters.

When a Smithsonian exhibit asked for a photograph of himself, Kent created a “self-portrait” sculpture. Kent’s work has been featured at the New York Museum of Contemporary Art, the Smithsonian Institute and more.

When he was 2 years old, he drew a wall mural of cowboys and American Indians behind his parents’ couch. As a child, he spent his days compulsively drawing and creating Play-Doh sculptures. Now, he’s an animation artist for big-name Hollywood studios.

Kent said he’s felt a strong need to create art since the day he was born. When he was a child, he thought he was the only artist in the world. His school didn’t have art classes. He drew compulsively and then threw the drawings away.

“I didn’t care about the drawings,” Kent said. “To me, it was about the action and being able to get closer to your imagination being a reality.”

Kent was a middle child. His older brother, Mark, was an athlete and straight-A student.

“I had no identity,” Kent said. “It was like I was invisible in the room, which I actually grew to like as a middle child. I got really into creating my own universe. I spent all my days in the house drawing and making things.”

Once when he was a child, Kent got off the bus and saw people replacing telephone poles. There was an old, withered telephone pole with rusty brackets and green, discolored glass insulators on the ground. He dragged it home, set it on an old Christmas tree stand and drew it.

“Mark thought I was crazy,” Kent said. “He was staring at me like, ‘He’s drawing an old piece of crap.’ But, I just saw something other people didn’t see. … My mother once said, ‘You’re just not smart enough to know you can’t do this stuff.’”

Kent was born in Springfield, Missouri, and he lived in Aurora and Marionville, Missouri, in elementary school. Then, his family moved to Illinois, about three hours away from the Art Institute of Chicago.

Despite living close to one of the biggest art schools in the country, Kent had never heard of art school. His school counselors never mentioned it, and he never went to a school with art classes. Instead of applying to art school, he worked at a Heinz ketchup factory.

Shortly after Kent and his wife, Martha, got married, Martha pointed out a $3,000 wood carving at an art gallery in Branson. Kent confidently told her he could do that.

“I look at everything like I can do it,” Kent said. “Everything I do, I just do it intuitively. I learn by trial and error.”

Martha didn’t believe he could carve something like that. In fact, she didn’t even know he was an artist. A man at the art gallery towered over him and asked if he carved wood or sculpted.

In an attempt to prove Kent couldn’t do it, the man told him he’d give him $200 to carve Elvis Presley for one of his clients, because he couldn’t find anyone else who could.

“About two weeks and three Band-Aids later, I finished,” Kent said. “I didn’t know what good carving tools were at the time. I used an X-Acto knife and sandpaper.”

The man looked at the carving and asked if he could carve John Wayne next. Kent worked for him for about three years, carving everything nobody else could.

At a music festival in Chicago, Kent met a Disney animator and showed him some sculptures he made as a kid of the Beatles cartoon series. The man told him he could make a lot of money in Hollywood. Through networking, he was promised a job at Disney Animation Studios.

Kent and his family moved to California, but the man who promised him a job didn’t return his calls.

His wife supported the family for about two years in California while Kent did some work for Hanna-Barbera, another animation studio, sculpting figures on his kitchen table.

He often dropped off job applications at Disney, not knowing the artists usually got hired through connections and never through applications.

At Kent’s youngest son’s fourth birthday party, he noticed a child’s parent staring at his sculptures on the kitchen table. Two days later, Kent got a phone call from Disney.

Turns out, the man at the birthday party was an art director at Disney, and they happened to need a sculptor for Aladdin. He had passed on the birthday invitation with Kent’s phone number on it.

After looking at Kent’s sculptures, the directors hired him on the spot, skipping the test that is usually required. He was hired as a freelance artist and has since sculpted characters for about 16 Disney movies, from “Aladdin” to “Tangled.”

Kent’s daughter, Missouri State University alumna Nellie Melton, is also an animator. She recently worked on a movie for Laika Studios that is not yet released.

Nellie said she’s always known she wanted to do animation because she looks up to her dad and has always loved drawing and creating characters.

“My dad has always been super supportive, and the stuff he makes has always been really amazing, so I’ve always asked him to teach me,” Nellie said. “He was always there for me, and we really bonded over art.”

“My favorite thing to sculpt is what I’m sculpting at the time,” Kent said.

For most characters, Kent is given a design for a sculpture, and the sculpture is used for reference. He has co-designed some characters and had some input in others. He designed the cat in “Coraline” himself and had a significant role in designing Mufasa for “The Lion King” and the villain in “Boxtrolls.” However, Kent said it’s not about who does what in animation.

“No one person gets credit for anything,” Kent said. “The janitor is just as important as me. If someone doesn’t show up, it causes problems down the line.”

The sculptures are built around a wire armature, a framework that looks like a stick person positioned in a pose.

When creating Brick for “The Incredibles,” Kent started out with a 10-pound ball of aluminum foil instead of an armature and sculpted about 40 pounds of clay around it.

Kent said a small character can be sculpted in a day, but a large character like Brick takes about a month to only cover the surface.

For “The Incredibles,” the sculptures were scanned, and the expressions and movements were adjusted on a computer.

When creating character sculptures, Kent focuses on the character’s personality and body language. For example, a hero looks straight ahead with their chest out, leaning in. If it is a reluctant hero, their foot could be placed behind them in case they want to run away. Kent figured this out by studying films and art.

“I looked at fine art a lot for sculptures because there weren’t a lot of great film sculptures at that time,” Kent said. “I try to really capture the character’s attitude and who the character is to the story because everything that is done in animation is done for the story.”

Kent said it’s humbling to have people tell him certain characters resonated with them and helped them through hard times.

“The best part of my career is being able to accomplish something I wouldn’t be able to myself and hopefully make something that will make people laugh or find strength or comfort in it,” Kent said. “To be part of a team that does that is a special honor to be part of. I think that’s the power of animated films — people coming together from different walks of life and bringing something to the table.”

"I think that’s the power of animated films — people coming together from different walks of life and bringing something to the table.”

Recently, Kent has worked on movies for Laika Studios from his studio in Branson, Missouri. He has worked on stop-motion films “Paranorman,” ”Boxtrolls” and Laika’s first film, “Coraline.”

Kent said working on “Coraline” was one of the biggest challenges in his career. The sculptors had to collaborate and adjust their work to look similar. Kent had never collaborated with other sculptors before.

“The great thing with working on ‘Coraline’ was learning how to sculpt characters in ways I wouldn’t have before,” Kent said.

For “Paranorman,” Kent sculpted a blank face and magnetic face parts that can be attached to the face to create the characters’ faces and facial expressions. The bodies are jointed, and they film one movement and expression at a time.

Kent said he enjoys working on Laika films because every film is a different challenge.

“One film might be a musical; one might be real heavy,” Kent said. “It’s just all over the place, which I like as a creative person, because you get to do new stuff.”

Anything seen in Laika movies is made by hand. Kent described it as a “miniature world” where former hairstylists now create wigs for characters and people knit tiny mittens using straight pins and magnifying headgear and build miniature cars with glass windshields that roll up and down.

“Stop motion is the most incredible process to watch,” Kent said.

Kent said he’s glad to work in animation because he believes it’s an important job.

“People can bond over it, like a good Thanksgiving meal,” Kent said. “Considering all the things you can get involved with in the art world, animation is one of the best, in my opinion. I feel proud of everything I’ve worked on, and I have no regrets.”