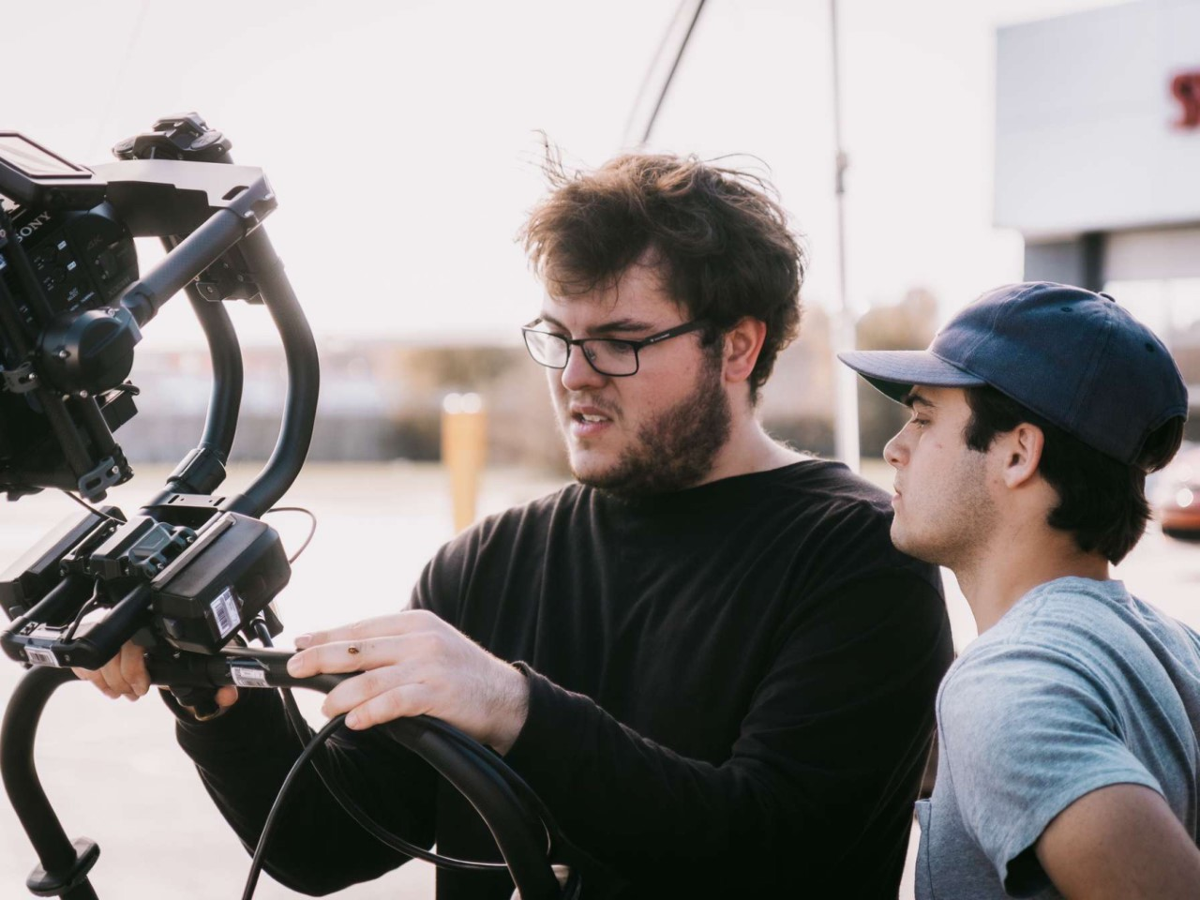 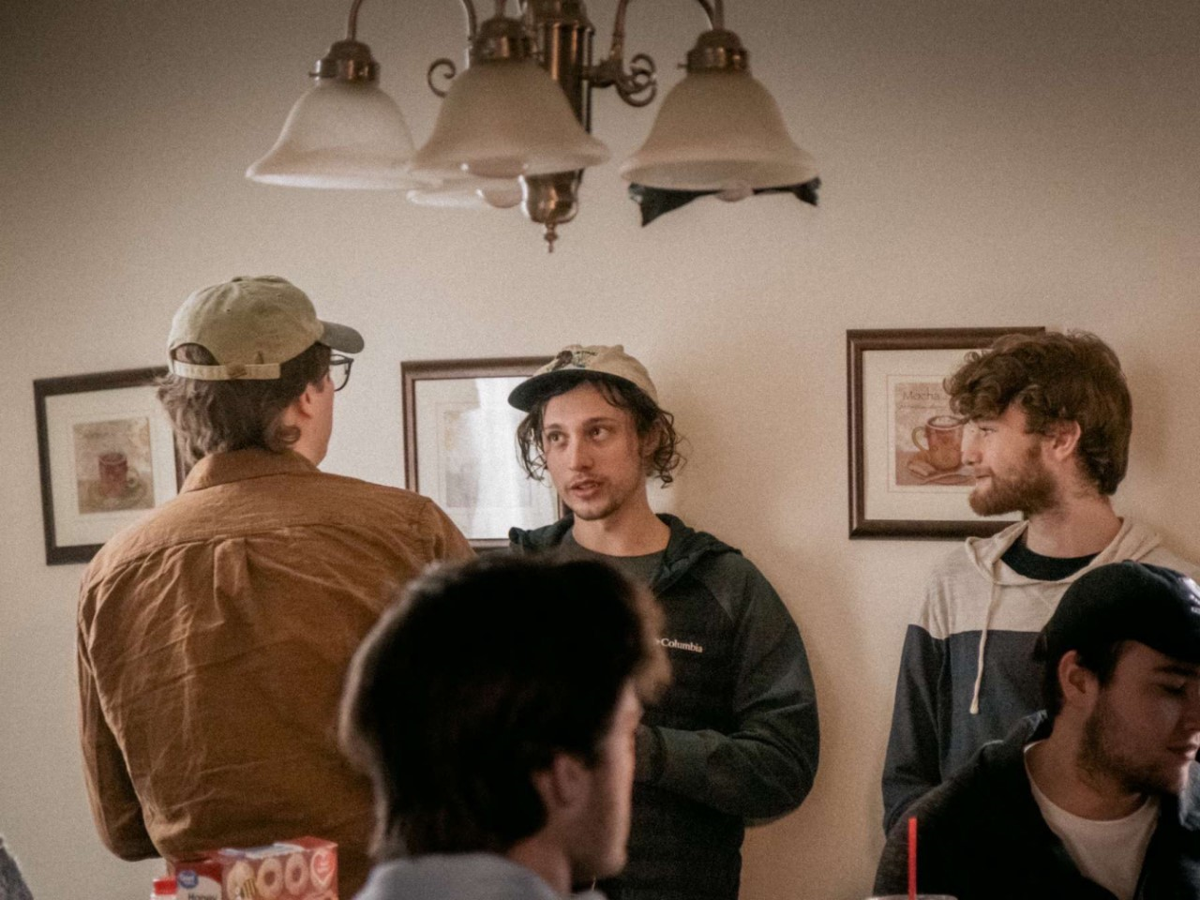 Senior electronic arts audio studies major Spencer Pearson, center, talks with his fellow crew members on the set of Internalize. Pearson is the composer for Internalize.

Senior electronic arts audio studies major Spencer Pearson, center, talks with his fellow crew members on the set of Internalize. Pearson is the composer for Internalize.

In film and television, writers and directors alike have tried to accurately depict mental illness. This proves to be a difficult task because mental illness can feel different for everyone and doesn’t always present itself outwardly.

The film, “Interalize,” follows Brennan, a young man who lost his parents at a young age. This causes Brennan to be more reserved and leads him to experience bouts of depression. “Internalize” will focus on one of the episodes of his depression.

What makes the film unique is that it visualizes Brennan’s decline in mental health through abstract visual effects. The film, according to its description on Indiegogo, uses “experimental sound design, complex cinematography and an evocative original score” to convey the tone of the film.

Mitchell thinks the visual effects help to greatly improve the traditional story of someone affected by mental illness.

“On its surface level, it’s like oh, college sad boy hours,” Mitchell said. “What it really does is combine a lot of different aspects of visual effects, cinematography, styling, sound design and music to create a really in-depth and impactful story.”

“We wanted to be more honest about what mental health issues feel like because they’re so different for everybody,” Katz said. “It can be hard to put that on film. There are so many shows or movies that feel like they’re either pushing it to be unrealistic or taking away from the abstractness of mental illness.”

Mitchell was especially excited to work on the abstract aspect of the project.

“I personally wanted a project where I could tackle something very internal,” Mitchell said. “We’re trying to visualize a person’s experience, and that’s a very difficult thing to do.”

Katz and Mitchell first met in a class called Introduction to Audio Technique. They knew fairly early on that they wanted to work on their senior thesis project for the Electronic Arts program together.

Katz and Mitchell bonded over the fact that they both wanted to depict someone dealing with internal issues because they knew firsthand how it felt.

One of the first things Katz said he and Mitchell agreed upon was not having a definitive ending that is stereotypically “happy.”

“For people who are living with this, they’ll go through another bad day or another difficult period,” Katz said. “People knowing they can get through that means a lot more and is a lot more hopeful. It’s better than just saying ‘Ah, it’ll end someday.’ Telling yourself that and then having another bad day makes you feel worse.”

Katz and Mitchell began writing the script for the film in January of 2019 and began filming in fall of 2019. They are currently in the post-production stage and are doing minor tweaks to their project.

According to Mitchell, the film has roughly 45 crew members and estimates the film will run about 22 minutes.

Katz and Mitchell both agree on a message they hope the audience takes away from the film.

“If you are feeling depressed, or sad, or anything like that, you’re not alone in feeling that way,” Katz said. “A support system will always be there. It might not feel like it, but there always will be. So far, you’ve beaten 100% of the bad days that you've been through. You can’t let the bad days win. There will be another good day in the future.”

Mitchell added onto that message.

“One of the more harmful things that you can do is push your support system away,” Mitchell said. “Once you start isolating yourself, you really do become alone. It's important not to do that.”

There will be showings of all the senior EA film projects on May 11 at the Plaster Student Union theater and on May 14 at the Alamo Drafthouse Cinema. The PSU theater showings will be free to students.

Childish Gambino’s most recent album, “3.15.20” is his most experimental yet. Read more

The protesters chant in front of City Hall. Read more