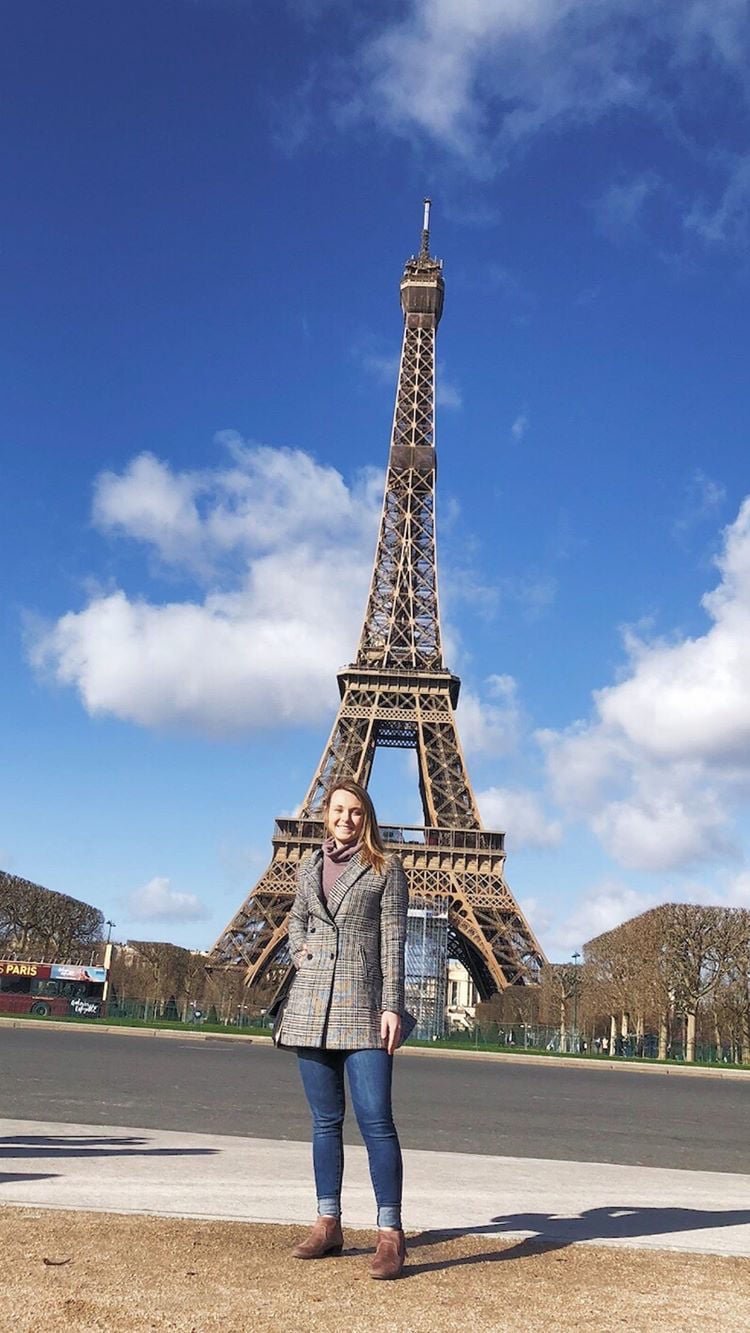 Sydney Dungan intended to study away for the semester in France. Now because of coronavirus, she has moved to the English countryside. 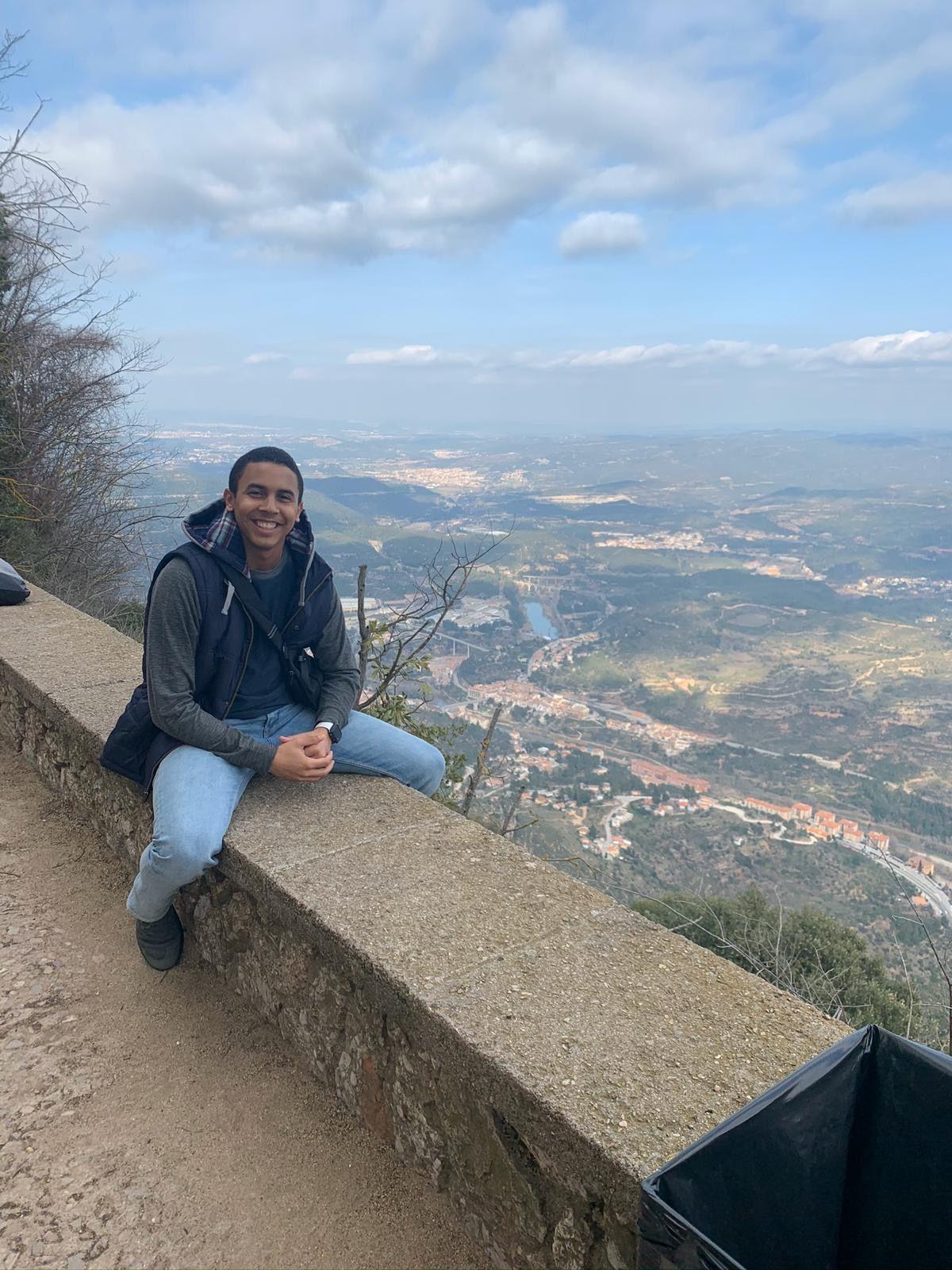 Manny Elivo is on a study away trip in Spain. He chose to stay in Barcelona through the coronavirus pandemic. 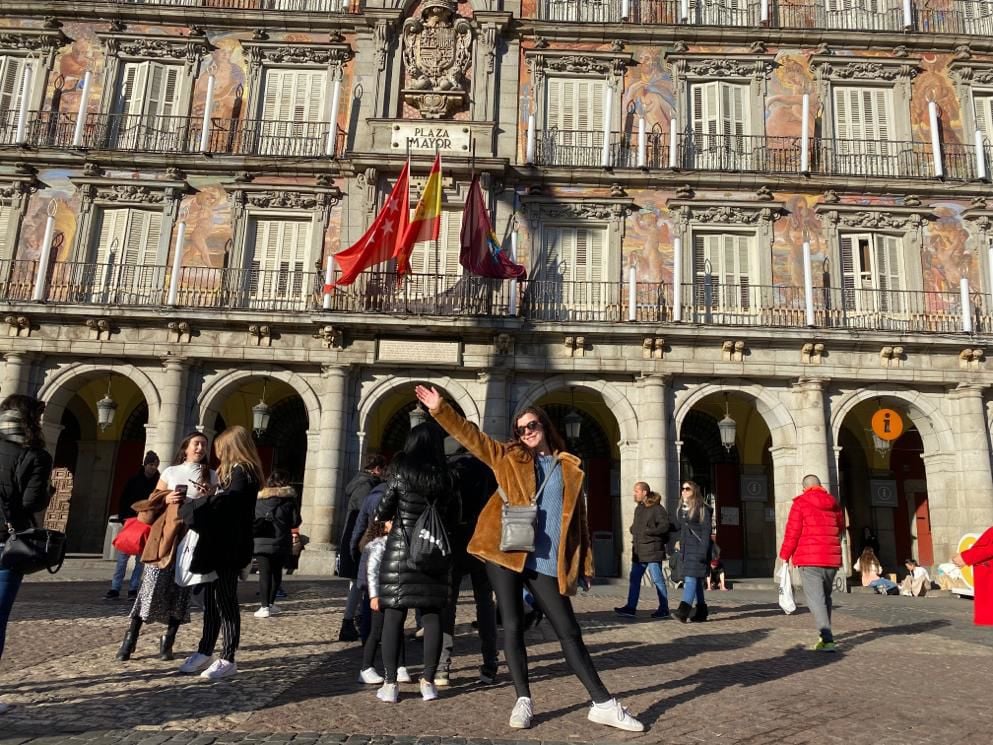 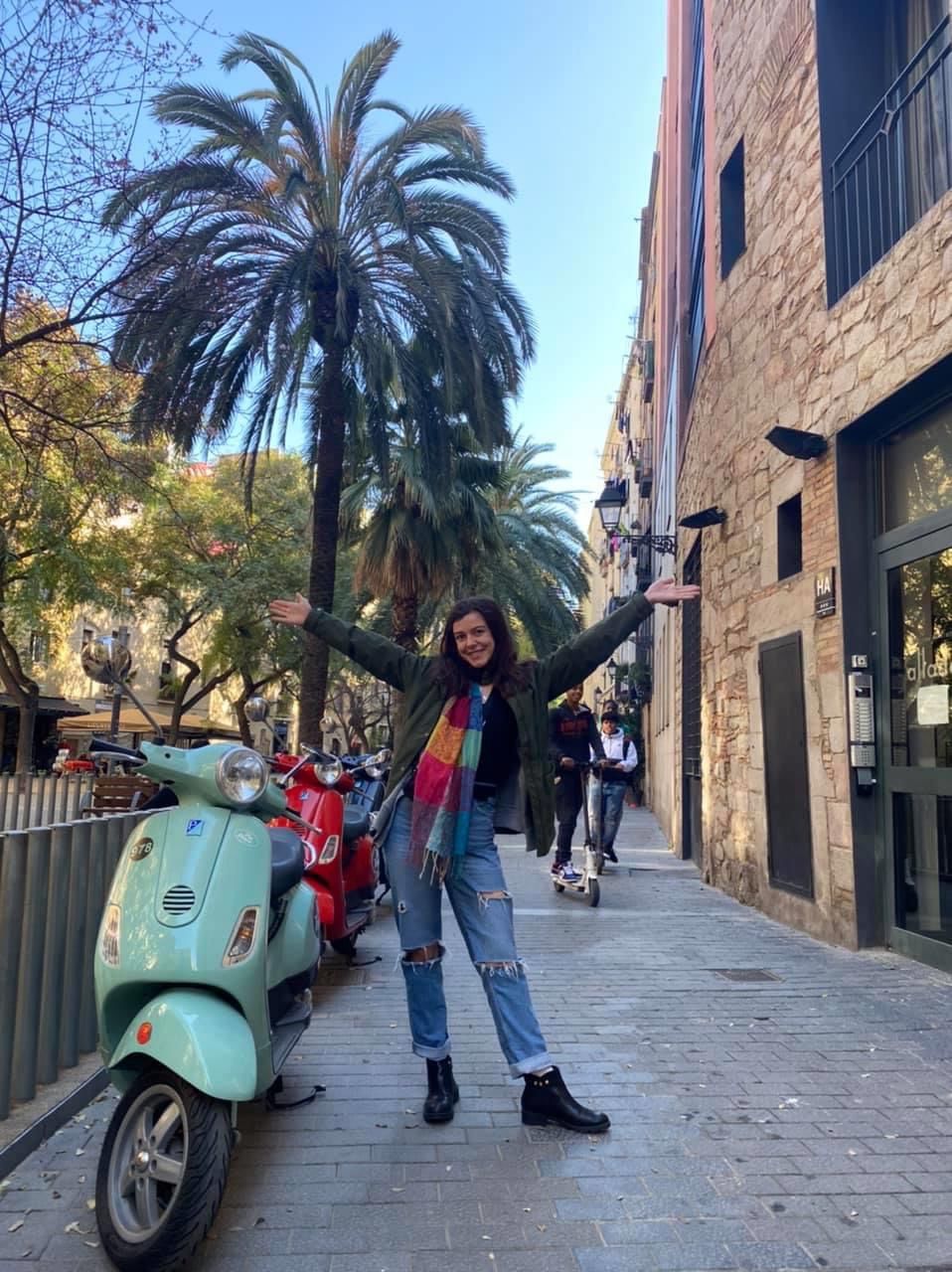 Sydney Dungan intended to study away for the semester in France. Now because of coronavirus, she has moved to the English countryside.

Manny Elivo is on a study away trip in Spain. He chose to stay in Barcelona through the coronavirus pandemic.

Many spring 2020 study away trips were cut short due to the global coronavirus pandemic. Some bears abroad had little choice but to return home while others have explored their options and maintained to finish out their semester-long trips.

Emily Freitas never imagined her semester abroad in Spain to end the way it did — abruptly, due to the fast-spreading global coronavirus pandemic.

Before Freitas left Madrid to return to the U.S., she saw the city come to a stand-still as the official number of coronavirus cases climbed steeper with each passing day.

Now, Freitas has seen two parts of the world virtually shut down. Compared to the Spanish response, the attitude in the U.S. has been different, she said.

“It’s interesting to see culturally how Spain and how people in Madrid reacted to it, from my experience, and then how people in the United States react to it,” Freitas said.

From what Freitas witnessed, there was much more of a collectivist attitude in Spain compared to the U.S. response. Freitas said the U.S. has seemed reluctant and lackadaisical from what she has seen.

Freitas said she heard criticism of the president of Spain’s response to the virus. Spain has the second largest number of cases of coronavirus in the world at around 161,000. The U.S. leads the count at over 521,000 confirmed cases.

Due to the rising number of cases, Frietas’ program — the University Study Away Consortium —  canceled March 11. The program coordinators told students to leave the country by March 18. President Trump issued a travel ban from Europe to begin on March 13, which caused some initial confusion for students coming home to the U.S.

The travel ban allowed U.S. citizens to return to the states but Freitas said some of her peers packed their bags and booked flights within 12 hours of the program’s cancelation.

Amidst the confusion, Freitas planned to leave on Monday, March 16. That is, until Spain began limiting air travel, cutting capacity by 50%.

Freitas said her host mom, “a very, level-headed, logical woman,” came into her room at 2 a.m. on March 15 and told her she ought to book a flight for that day. Freitas stayed up, changed her flight, finished packing, left her host family in Madrid and headed to the airport at 5 a.m. to fly out at 9 a.m.

The airport was crazy, Freitas described. She saw many young people trying to leave to go back to their home countries. From TSA workers to travelers, Freitas said everyone seemed tired and on-edge.

“Everybody just had this whole feeling of being ready to be home and ready to be away from the stress of being in a foreign country when all this is happening and not being in a comfortable environment,” Freitas said.

Though Freitas was disappointed her one semester abroad was cut in half, she was consoled knowing she was not alone.

“Every single person in the world is dealing with some kind of disappointment,” Freitas said. “It kind of puts it in perspective.”

Manny: Waiting out the storm

Unlike Freitas, Manny Elivo, senior international business major, has chosen to stay in Spain in case the pandemic subsides before the semester ends.

Once the pandemic hit Spain, Elivo’s university moved to online courses but did not specify whether seated classes would resume later in the semester.

For Elivo, a senior intending to graduate in December of 2020, there was a risk of not being able to complete his required classes.

“Our school told us that they don’t have an online method to finish the courses, so if we would go back home and try to come back into Spain, we would kind of just lose the semester.”

Elivo said MSU urged students to return to the U.S. and was great at working with students, offering to help manage credit transfers. But Elivo’s classes were not available as eight-week block classes this semester.

“This semester is very critical to have all my courses done because I need them in order to graduate on time,” Elivo said. “The way that my degree is working with my master’s program and everything else, it’s essential for me to finish the semester.”

Because Elivo is doing an independent study and is not part of an affiliated study away program, he had to make arrangements for housing on his own. Having a contracted lease for an apartment in Spain was one of the factors that led Elivo to stay.

He is living in an apartment with another MSU student also on independent study, so the two decided to continue their semester in Spain together as planned.

“I think for me, since there’s two of us, staying here was a lot better because there’s someone else here just in case anything happens,” Elivo said. “If I was by myself, I don’t know if I would have stayed.”

Elivo and his roommate are now in lockdown in Barcelona until April 26. He said they saw the pandemic escalate drastically within the first few days; one day, students were talking in class about the first confirmed case. Just a few days later, thousands of cases popped up across the country.

“Everything happened so quickly that there was no plan of action. You just had to respond to the situation right then,” Elivo said.

Though the Spanish prime minister has announced the nation has seen its peak in cases, the country still faces ventilator shortages and limited emergency room space. To help with the issue, Elivo said hotels have been opening up their spaces to accommodate more patients.

All things considered, Elivo said he thinks the Spanish government is doing their best at trying to contain the spread of COVID-19.

“I think staying out here in the middle of this pandemic, we’ve been learning and seeing how things are happening from a different perspective out here in Spain where it’s one of the worst cases of the outbreak in the world.”

Throughout this experience, Elivo said he was thankful for MSU and the study away office for their concern for safety and frequent communication.

Sydney: Residing by the countryside

Similar to Elivo, Sydney Dungan, a junior advertising major, chose to stay in Europe to ride out the coronavirus pandemic. Initially, Dungan’s semester-long study away trip was to Rennes, France, a city in the northwestern region of the country, but she has now moved to the English countryside.

As the pandemic worsened, Dungan said she felt unsafe at her apartment in France studying at the Rennes School of Business. Currently, the U.K. has around 60,000 confirmed cases of coronavirus compared to France’s 86,000.

“All of our classes switched to online due to the crisis so I began to look at my options.”

Some of Dungan’s family members are high-risk and she didn’t want to potentially infect them, which is why she decided to stay in Europe.

Dungan made arrangements to live with extended family in Darlington, U.K., who she planned to visit all along.

U.K. Prime Minister Boris Johnson issued a stay-at-home order on March 23. Since then, Johnson himself has fallen ill with coronavirus.

Dungan said the U.K. is not strictly enforcing the stay-at-home order as other European countries. In the U.K., people may leave the house to shop for essential items, exercise once a day, get medical services and go to work if they are essential personnel.

Dungan said grocery stores limit the number of customers shopping at one time and have lines set up to ensure everyone stays six feet apart.

“The cashiers all have screens between them and customers, and they all wear gloves and masks,” Dungan said.

Though the global pandemic has not yet reached its peak, Dungan sees signs of hope and humanity.

“In my area, children are drawing rainbows and putting them in the windows,” Dungan said. “You can see them everywhere. They have become the national symbol of happiness during this pandemic.”

Dungan has seen the U.K. show its appreciation for frontline health workers as the nation designates times to applaud those who work in hospitals, risking their lives to save lives.

“It’s been pretty amazing honestly, but I don’t know how much longer people will last this way.”

Ruth and Marty Ginsburg were married for 56 years. Read more

On Sept. 16, the Netflix original film “The Devil All the Time” was released, advertising a … Read more