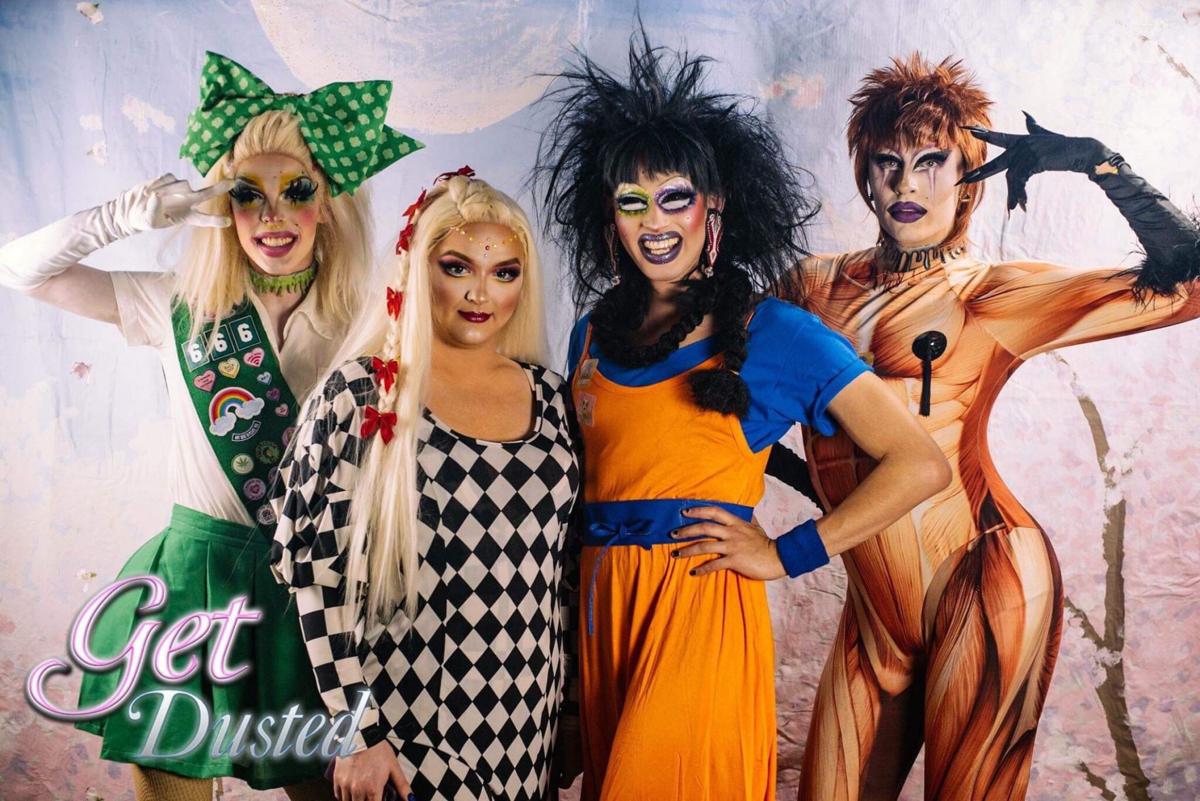 From left to right: Lux, Daegen Michelle,  Crystal Methyd, and Daya Betty pose for an official Get Dusted photo at Get Dusted Anime Night on March 31. 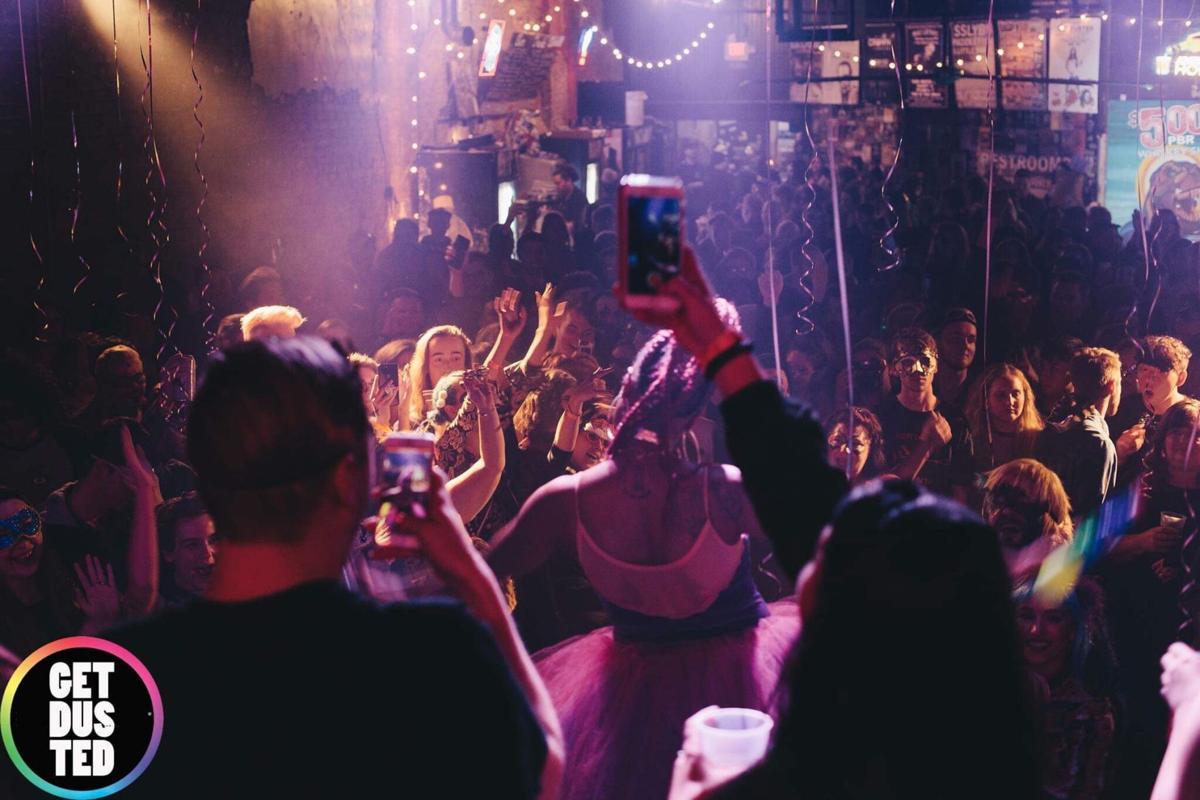 A Get Dusted official event. 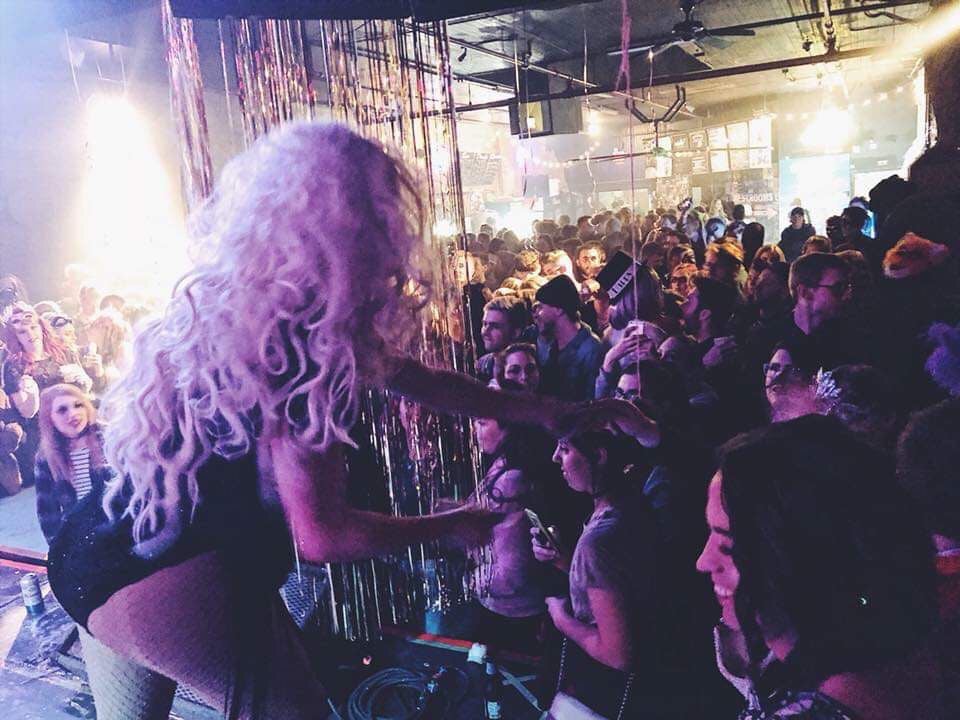 Daegen Michelle performs at a drag show on Dec. 30, 2017. Get Dusted is typically held at the Outland Ballroom in downtown Springfield.

From left to right: Lux, Daegen Michelle,  Crystal Methyd, and Daya Betty pose for an official Get Dusted photo at Get Dusted Anime Night on March 31.

A Get Dusted official event.

Daegen Michelle performs at a drag show on Dec. 30, 2017. Get Dusted is typically held at the Outland Ballroom in downtown Springfield.

Wearing a D.A.R.E. T-shirt and a skirt she now thinks is ugly, Crystal Methyd performed in drag for the first time at Springfield PrideFest in 2015. She decided to try performing after watching RuPaul’s Drag Race. While she was there, she met drag queens from RuPaul’s Drag Race and cried tears of joy.

“I was practicing my makeup in my room for about a month before I performed,” Crystal said. “I had a lot of fun, and people told me I looked different, and I liked that.”

Crystal, also known as Missouri State University alum Cody Harness, wished there was a drag scene in Springfield like the ones she saw in bigger cities such as New York City and Chicago. In December 2015, she met with Johan Collins, who is now the Get Dusted promoter. Together, they created Get Dusted.

Get Dusted is a monthly event with a different theme each time. Typically held at the Outland Ballroom, the events feature a musical guest performance, a drag show and a dance party with a DJ. Themes have ranged from outer space to slumber party to anime night.

Get Dusted videographer Drew Mittman, an MSU alum, said the best parts of the drag shows are the environment and community.

“It’s very warm and inviting,” Mittman said. “I feel like you meet much more interesting people than if you just go out for drinks at a bar. You meet the nicest people, too. There’s no hate. It’s something Springfield has needed. As a gay man, it’s liberating and nice to have another place to feel included.”

As the promoter, Collins schedules artists and brainstorms video ideas for Get Dusted. Get Dusted has featured musical performances from Cupcakke to Brooke Candy to Lil Debbie. On Nov. 17, a country artist will be performing.

He has been booking shows for 15 years. He has worked for the South by Southwest music festival and with big-name artists such as 21 Savage and Lil Yachty.

“(Get Dusted) means so much more to me,” Collins said. “This is, by far, the coolest thing I’ve ever been a part of.”

Drake Evans, a senior fashion design major, has been attending as many Get Dusted shows as he can since it was created.

“I think Crystal has brought something and made it into something that is her own,” Evans said. “It’s been really awesome to watch it grow and explode into this big thing. It’s so freeing and so amazing to watch the artistic expression that these people have when they get up and perform. I don’t think I could ever do it, so I think just to vicariously live through somebody for a night is really cool.”

Collins said he had friends who had been to drag shows but said it wasn’t for them — until they went to a Get Dusted show.

“It’s a magical experience for everyone,” Collins said. “We have a little bit of everything. If someone doesn’t really like drag, they’ll still enjoy it. But if they come, they’ll start to like drag. … It ain’t like your typical drag show.”

When Crystal first started Get Dusted, she didn’t have any drag queen friends, so she had to recruit drag queens in Springfield. She asked Daegen Michelle to perform because she knew who she was from performing at Martha’s Vineyard, but everyone else was friends of friends that Crystal convinced to perform and let her do their makeup.

For a lot of them, it was their first and last time doing drag. After the first show, people started asking Crystal if they could perform.

“We have so many more drag queens in Springfield now, and it’s really cool,” Crystal said. “We have a big cast, so each drag queen only gets to do one number for each show, but they each always put their whole heart into that number.”

The drag queens almost never perform the same song twice. They meet a little over a month before the show to discuss plans for it. They then meet a couple times a week as it becomes closer to the event to learn songs and choreography.

The day of the show, Crystal works all day to prepare. She said she allows herself three hours to do her makeup and then goes to the venue to set up. She makes the backdrops by hand and begins making them many weeks ahead of time. She climbs on a ladder to set up the backdrop and other decorations, and then she talks and takes pictures with the crowd before the show.

“It’s like a drag Broadway,” Collins said. “It’s not just someone going up there and lip-syncing. They put so much work into it, and I had no idea”

Mittman said Get Dusted made the drag community a “melting pot.” He added that straight men also do drag for Get Dusted. A lot of the time it’s their first time, and Crystal does their makeup.

“It’s not about being gay, straight, trans, whatever,” Mittman said. It’s about being at a place where you can be yourself as a human being.”

"It’s not about being gay, straight, trans, whatever. It’s about being at a place where you can be yourself as a human being.” - Drew Mittman

Crystal said many people don’t understand drag, but she goes out in drag and hopes to change people’s minds.

“My favorite part of drag isn’t really even performing,” Crystal said. “Performing is fun, but I just like to go out to different bars like I normally would on a Friday night, but I like to just look crazy. That’s my favorite thing. When I hear people say ‘what the F is that,’ that’s when I know I did my job that day.”

Mittman said he grew up in Springfield, and it used to be normal to hear people shout homophobic slurs. He said that doesn’t happen as often anymore. Crystal also said she’s noticed people have become much more accepting.

“A few years ago, when we first started Get Dusted, I was getting a lot more gas station sodas thrown at me than I am now,” Crystal said. “Now, I get, like, none.”

Collins said he is glad people are now more open-minded and accepting toward drag and the LGBT community. He said people often bring their parents and grandparents to the shows, and he enjoys seeing them have a great time. There are drag queens who are in fraternities at MSU, which is something he said most likely wouldn’t have happened in the past.

“They’re all really brave, and I think it’s awesome for the people that paved the way for them who did drag like 15 or 20 years ago in Springfield,” Collins said. “It’s cool to see how far it’s come.”

Crystal and the Get Dusted squad went to the Trump rally last month and attended many Black Lives Matter protests. They said people at red lights at the protests would try to start fights with them, but they listened to them and explained their thoughts.

“In the end, there was a lot less yelling from both sides,” Crystal said. “It feels good to make a change. All of the queens care about making a positive impact on everyone’s life. They’re so kind and genuine. I try to have a big smile and be as open as I can be with everyone.”

Daegen Michelle started doing drag when she was a junior in high school after her aunt took her to her first drag show. She said performing feels natural to her.

“It’s like second nature,” Daegen said. “We all do it in the mirror or in the shower or in the car to the songs you like. It’s all about having fun.”

Daegen is a transgender woman, and she began doing drag because she wanted to be herself and embrace who she is.

“I just wanted a platform to be myself,” Daegen said. “It could be a box on the sidewalk with lights. It doesn’t matter where you do it, what you’re wearing, or how you look. It’s about how you feel and how you make other people feel. It’s always been that way.”

Crystal said her favorite part of drag is gaining confidence and learning to always be herself. She used to be terrified of performing on stage. Now, she enjoys being the center of attention.

“People love seeing someone be their truest self,” Crystal said. “It’s magical. Crystal is kind of why I became confident. I used to go out and hang out in the back. It’s taught me to be myself every day and be as fabulous as I want to be every day, because sometimes, as I’m walking down the streets of Springfield, I hear people say, ‘That person is probably from out of town,’ but I’m from Springfield, and I love it here. I want to be seen and accepted by everyone.”