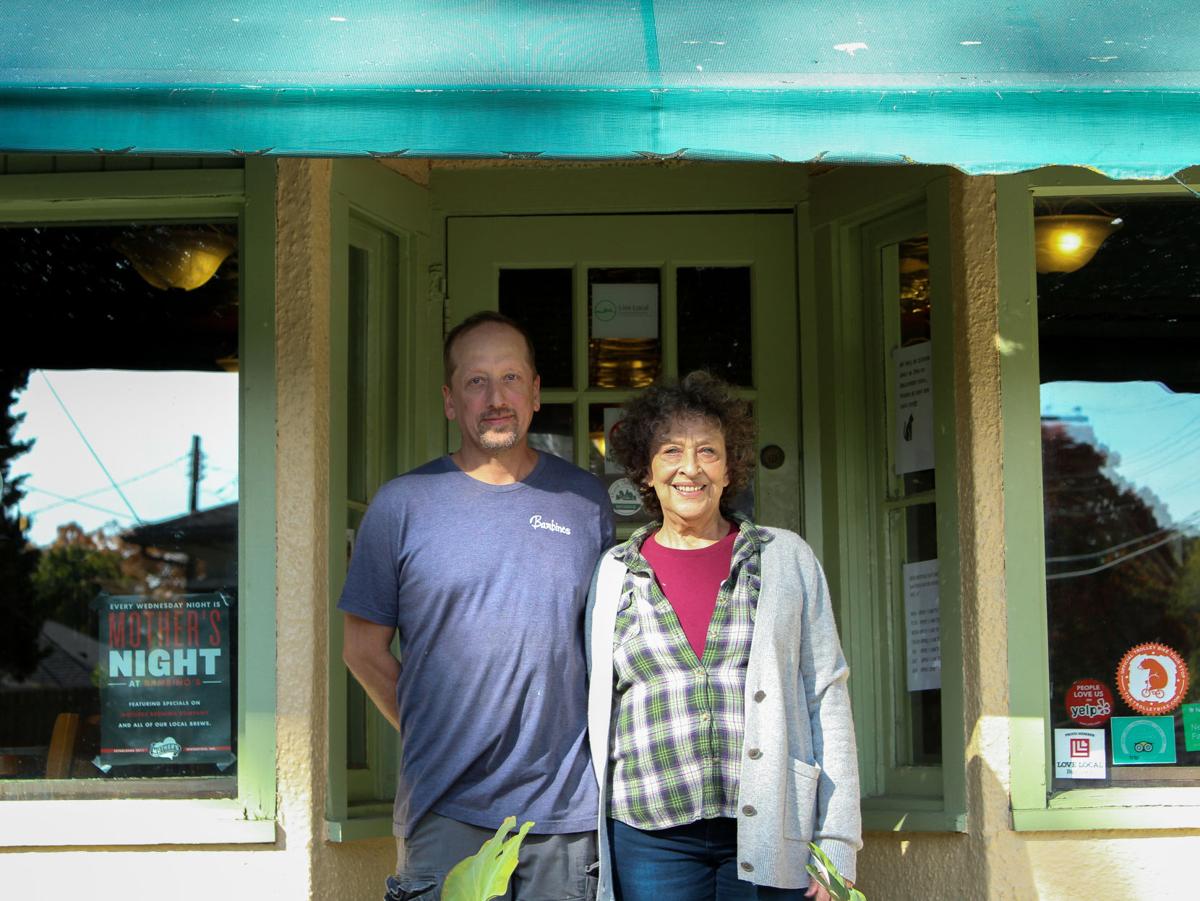 Mary and her son Chuck Faucett, in front of their restaurant, Bambinos Cafe. Mary and her family, including her sons Chuck and Andy (not pictured), own the restaurant. 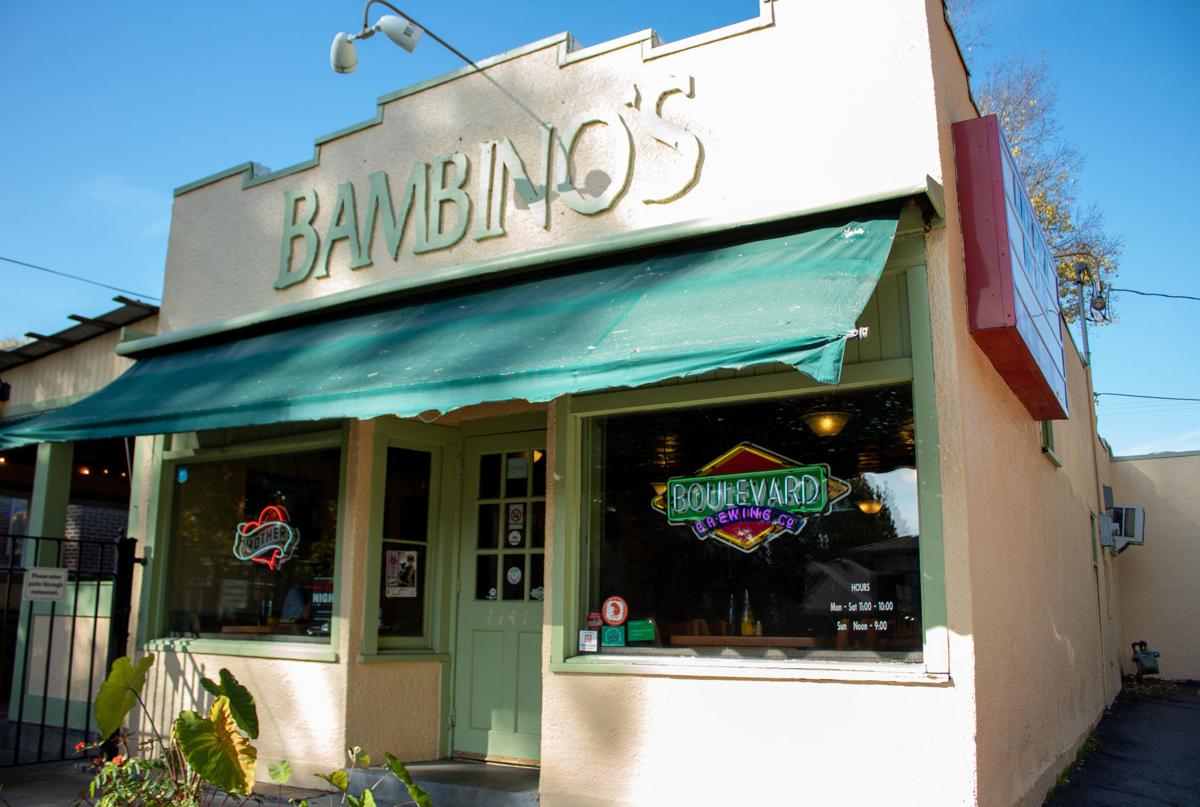 Bambinos Cafe, owned by the Faucetts is located on East Delmar Street just a five-minute walk from campus. Bambinos serves homemade Italian classics — such as pasta, pizza and paninis — and specialty dishes.

Mary and her son Chuck Faucett, in front of their restaurant, Bambinos Cafe. Mary and her family, including her sons Chuck and Andy (not pictured), own the restaurant.

Bambinos Cafe, owned by the Faucetts is located on East Delmar Street just a five-minute walk from campus. Bambinos serves homemade Italian classics — such as pasta, pizza and paninis — and specialty dishes.

Tucked away in a neighborhood on the corner of East Delmar Street and South Florence Avenue lies a quaint and authentic slice of Italy known as Bambinos Cafe. While the restaurant is familiar to many, some may not know about the family that created Bambinos.

Mary Faucett and her family, including her sons Andy and Chuck Faucett, who are also co-owners of Bambinos, opened Main Cafe on Main Street just north of downtown Springfield in 1991.

It was here that the Faucett family gained invaluable experience in the business and drew the attention of those in the community.

“We had crepes, which was French,” Chuck said. “There was just things she always made at home that were really good like meatloaf and chicken crepes. As long as it was good, we put it on there.”

Following the success of Main Cafe, they opened Nonna’s Italian Cafe in 1994 in the heart of downtown Springfield, where they really branded themselves before selling it in 2006.

Andy Faucett was enrolled in the Entrepreneur Program at Johnson County Community College in Overland Park, Kansas, at the time of Nonna’s opening.

Andy then moved to Columbia, Missouri, in 1994 to open the first Bambinos with his friend Brian Ash followed by another opening in Lawrence, Kansas, in 1996.

With two Bambinos in two prominent college towns, the owners of McSalty’s Pizza thought Andy might be interested in taking over their location. So in 2000, a third Bambinos was opened on East Delmar Street, just a five-minute walk from campus.

The Bambinos in Lawrence, Kansas, and Columbia, Missouri, have since closed.

MSU is a place where the Faucetts said they feel a real connection. Mary was an English professor at the university, and a few of her children attended as well.

Starting out, they hired kids that lived in the nearby neighborhoods. Some of their parents even worked with Mary at MSU.

“It’s like having a small town just north of us,” Mary said.

It is also a hot spot after football games, especially homecoming. Mary said one of their busiest days of the year is MSU’s graduation.

Hannah Hickman, a recent graduate from MSU, has worked at the Bambinos on East Delmar Street for two years and considers it a community for her outside of school.

“There’s a couple that comes in every Monday night to play HQ (Trivia) at 8, and now I sit down and play with them every Monday,” Hickman said. “They love German chocolate cake.”

Due to limited seating and parking, as well as physical limitations making it difficult to cater out of such a small space, the time came to expand.

The second Bambinos in Springfield opened in 2015 in the Half A Hill shopping center located near the Galloway Creek Greenway. Located right next door is B2 Cafe, a coffee shop also owned by the Faucetts.

The Faucetts also contribute a significant portion of their time toward community outreach. They host an annual meal in January for the Council of Churches, as well as participate in various fundraisers for Springfield Public Schools.

The first fundraiser hosted by the Faucetts took place at Sunshine Elementary School. After putting on a spaghetti dinner at the school, they raised several thousand dollars to help fix the playground area which had become somewhat hazardous for kids.

“We’re real suckers for schools,” Andy said. ”We’ll help wherever we can, but there is a lot of community outreach that we have just accumulated over time.”

Andy recently canceled all traditional advertising after September to narrow their focus on sponsorships and fundraising.

The menu at Bambinos offers a variety of meals to choose from, but it can be difficult to select just one.

Mary and Chuck consider the top three most popular items on the menu to be The Ziti, The Greek and The Diana.

Andy, the primary creator of the Bambinos menu, considers his mother’s pasta still “one of the most satisfying things to eat.”

Mary was raised in a home that placed an emphasis on cooking, and her aunts taught her “what good food was supposed to taste like.” She passed this tradition on to her children, and now they do the same for their own.

Chuck’s personal favorite is The Greek which he eats nearly everyday.

“It kind of relieves stress when everybody sits down and has a good meal,” Chuck said. “If it’s a bad meal, it just increases stress.”

Bambinos provides authentic Italian food at an affordable price, with an Italianesque aura to match.

A cumulonimbus cloud forms on the last day of recording breaking storms for May. Read more