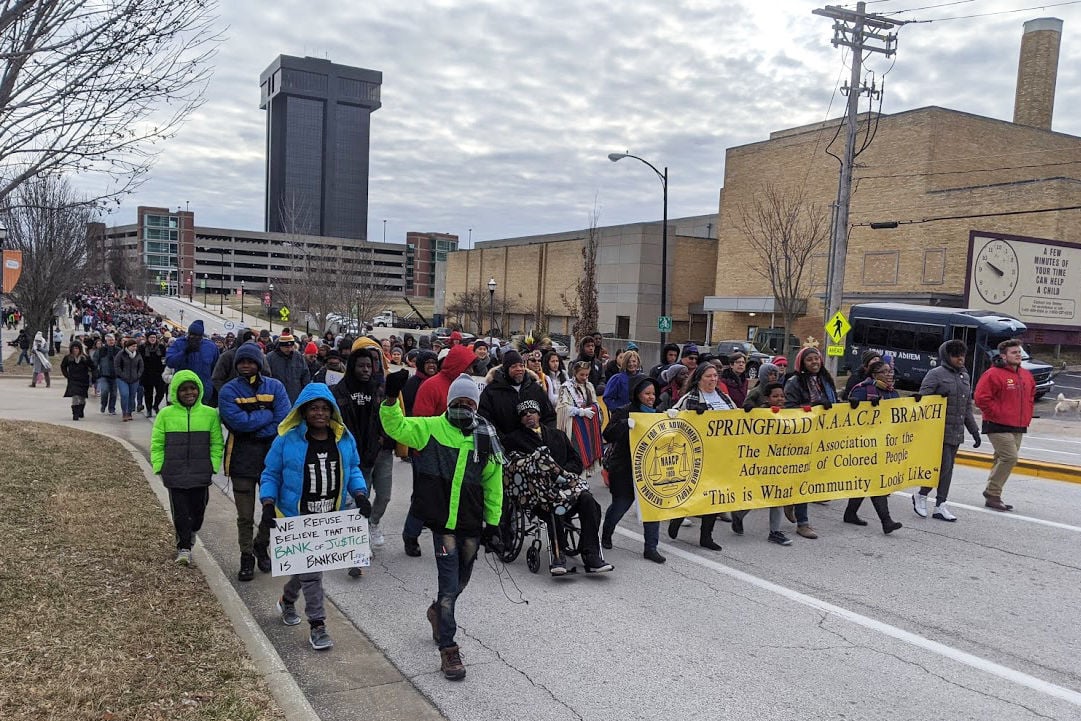 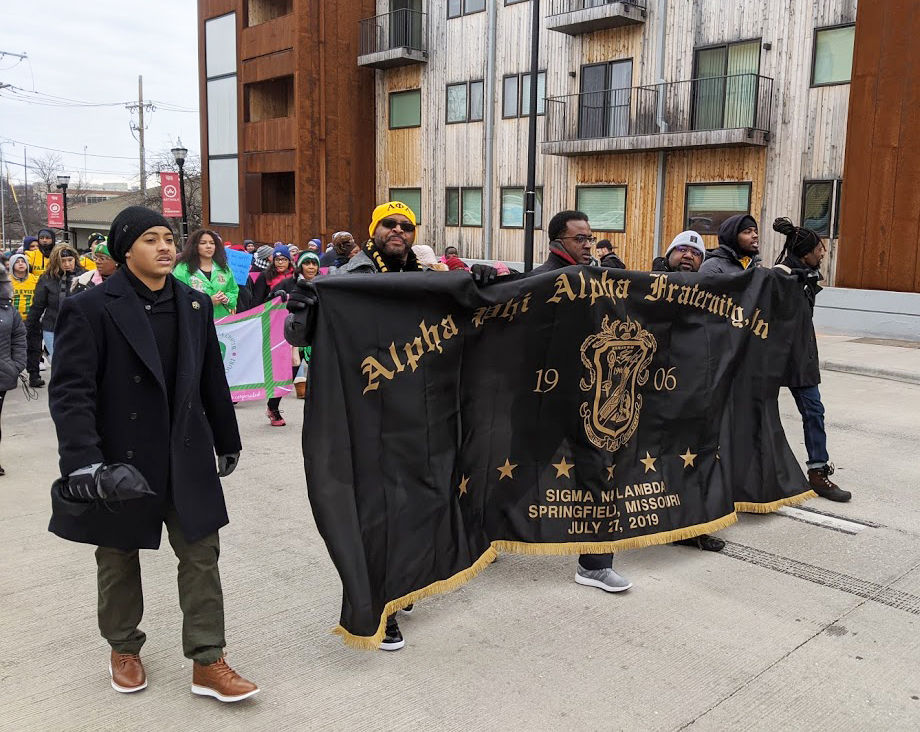 Member of the Alpha Phi Alpha Fraternity walk the streets of downtown Springfield during the National Association for the Advancement of Colored People’s annual Martin Luther King Jr. March and Celebration Monday morning. 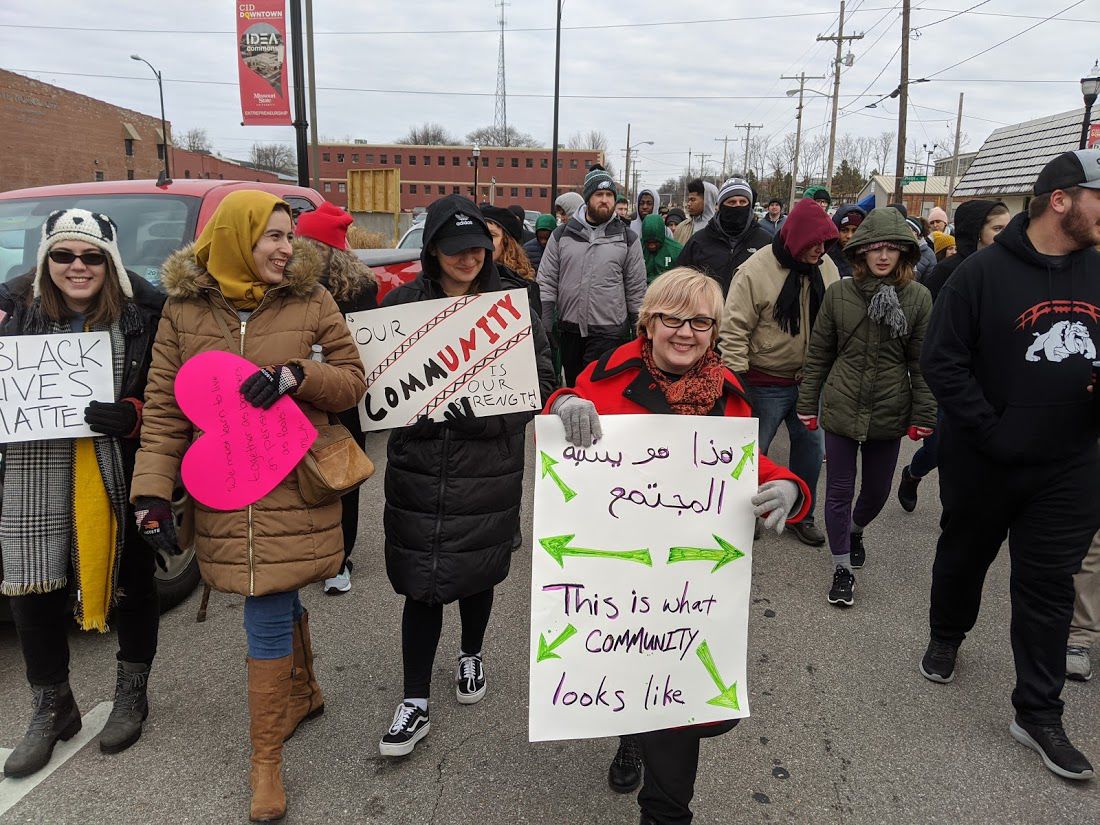 Member of the Alpha Phi Alpha Fraternity walk the streets of downtown Springfield during the National Association for the Advancement of Colored People’s annual Martin Luther King Jr. March and Celebration Monday morning.

Homemade signs, organization banners, high school football jerseys, pink Planned Parenthood scarves and even the mascot for the Springfield Cardinals made an appearance Jan. 20 at the National Association for the Advancement of Colored People’s annual Martin Luther King Jr. March and Celebration.

Participants of all races and backgrounds marched and chanted together behind the banner of the Springfield NAACP branch. The route departed the Jordan Valley Ice Park, turning north on Benton Avenue and crossing the bridge over the train tracks before turning west on Chestnut Street and south again on Jefferson Avenue.

This year’s theme for the event was “This is What Community Looks Like.” The march’s participants continuously cheered the theme, and many homemade signs throughout the crowd repeated the message.

Another sign read “we the people are greater than fear, defend dignity, and protect each other” and another bore green arrows pointing in all directions with the event theme written in both English and Arabic. A woman in a hijab carried a heart-shaped sign reading a quote from Dr. Martin Luther King Jr., “We must learn to live together as brothers or perish as fools.”

The final destination of the march was the Historic Gillioz Theatre, where the NAACP branch hosted a program named “Reigniting the Dream.” The program began with the recital of an invocation that Dr. King delivered in 1957 and the awarding of honors to the three founders of the organization’s march: Calvin Allen, J.D. Johnson and Denny Whayne. It continued with the awarding of prizes for the winners of the Equal Justice Initiative’s essay contest and the local art contest put on by the NAACP branch.

The essay contest awarded a total of $5,000 in scholarships between the final three winners, with Dominic Thomas, a junior at Hillcrest High School, receiving $2,500 for first place. He read his essay in its entirety on stage to the audience.

Titled “A False Sense of Change,” the essay gave facts and conclusions about nationwide racial inequalities to the audience, including research citations along the way. Statistics referred to a lack of progress in the nation’s prison systems and the disproportionate rate of incarceration amongst African Americans compared to the rest of the United States. “We are not living in a post-racist society,” Thomas quoted.

“Our government has made changes on paper, but not in the mentality of the people enforcing those changes,” Thomas read. “In today’s society, the new Jim Crow is now our prison system.”

The event continued with a play about the life of African American slave Milly Sawyers, presented by The Milly Project. It concluded with one last chant from the audience – “This is what community looks like.”

The No. 18 nationally-ranked Missouri State Lady Bears have shown a tendency to be caught sl… Read more