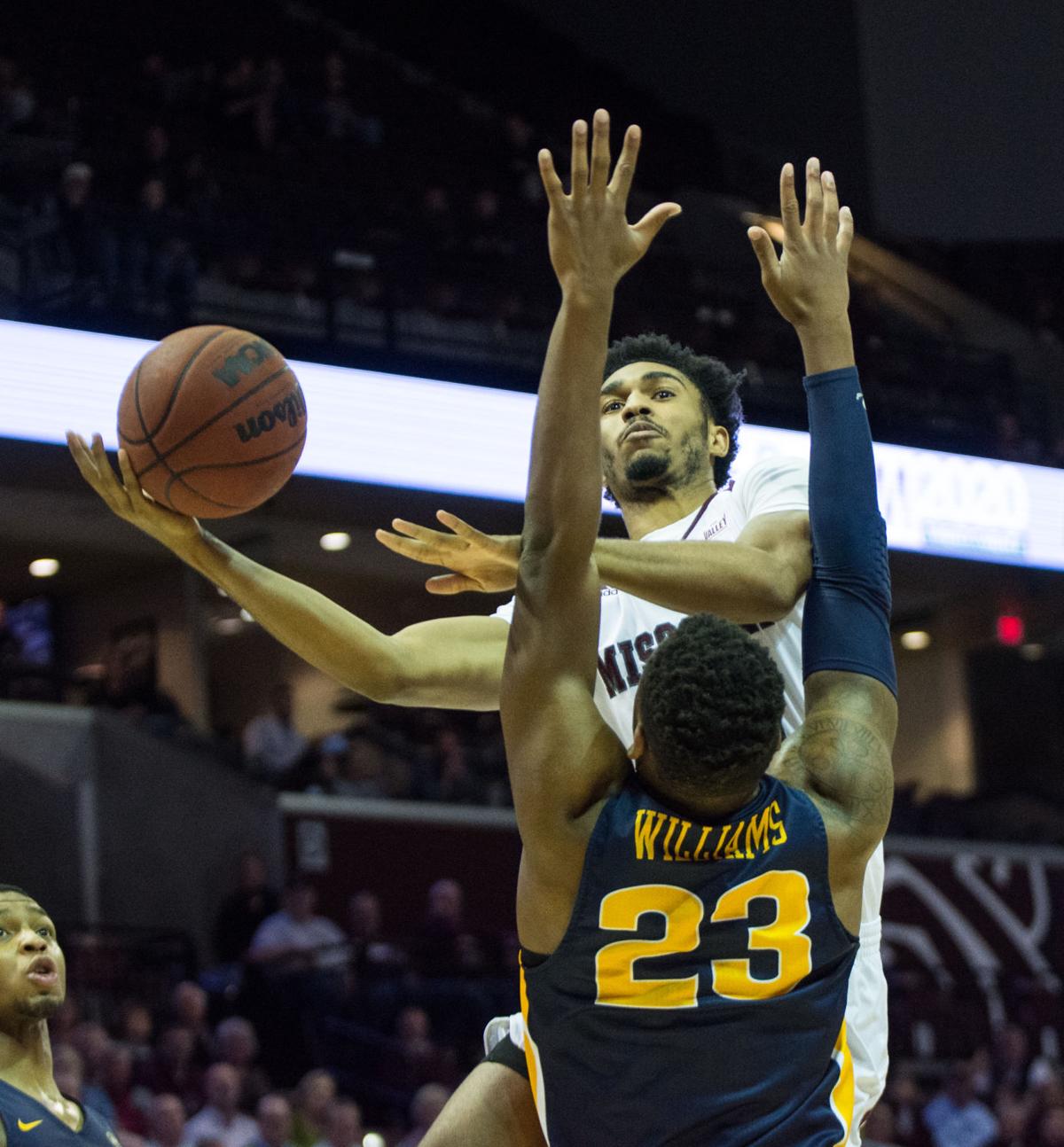 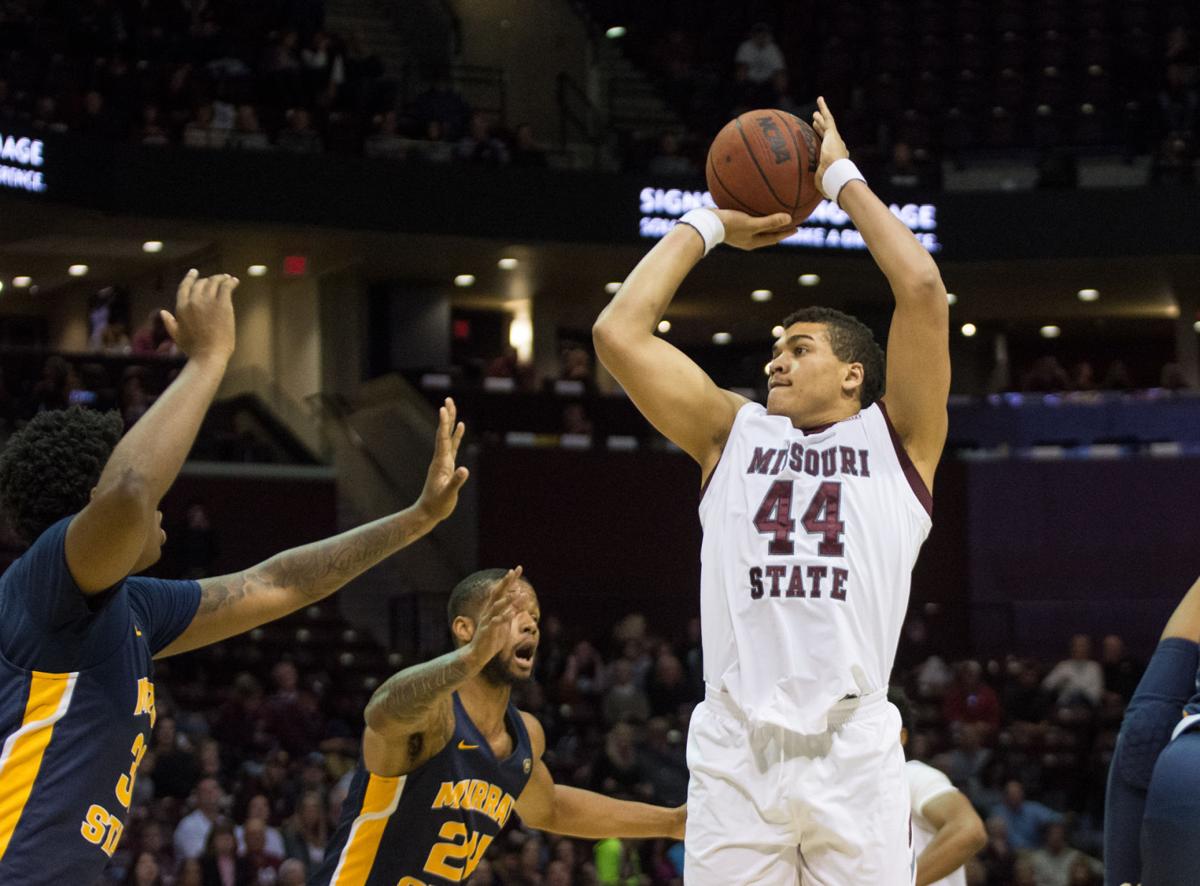 Junior Gaige Prim goes up for a shot. Prim scored 10 points in Missouri State's 71-69 win over Murray State on Dec. 3.

Junior Gaige Prim goes up for a shot. Prim scored 10 points in Missouri State's 71-69 win over Murray State on Dec. 3.

Leadership — or a lack thereof — was head coach Dana Ford’s reason for the Bears’ success tonight. But it was also a reason for their shortcomings.

In the 71-69 win over Murray State, the Missouri State men’s basketball team lacked leadership early on.

“That was a coach’s decision,” Ford said about Mohammed’s lack of minutes. “I anticipate him getting back in the rotation. We need more leadership from him, Keandre and Tulio.”

Last year, Ford said the same thing about seniors Jarred Dixon and Obediah Church. He sat the two instead of starting them in a home game against Arkansas-Pine Bluff on Dec. 22, 2018. Dixon owned up to the leadership challenge and started every game thereafter, while Church didn’t and left the team on Jan. 28.

The Tuesday game against Murray State started slow and leadership-less, with a 2-2 score for the first six minutes.

Scoring really got going after the first media timeout, but it wasn’t pretty basketball. The Bears had nine turnovers in the first half alone. The Bears’ leading scorer, Cook, finished the first half with zero points and just one shot attempt.

The second half continued with the slow pace for the Bears.

While the Bears made shots, the Racers battled with them and eventually tied it at 40 with 11:41 on the clock.

Missouri State was unable to take the lead back until freshman point guard Ford Cooper Jr. hit a triple, his only made shot of the game, with 6:52 left in the game.

“Ford Cooper was phenomenal,” Ford said. “He’s been phenomenal every opportunity we’ve given him.”

Murray State battled to the finish, but the Bears were able to pull away with the win. Murray State’s Tevin Brown lobbed up a shot as time expired to make it a two-point win for Missouri State.

Those final seven minutes showed what the Bears are capable of, and Ford said that change happened because of leadership from Cook and Da Silva. Cook, despite the blank first half, finished with 15 points. His first points came from a jumper with 8:30 on the clock.

“Cook was held scoreless until the last eight minutes, I think, and the sucker got 15 points,” Ford said. “If I could get on the court and give it to Cook, I would, but I can’t.”

Da Silva finished with his second double-double of the season. His 16 points led the Bears.

The Bears stay in Springfield for finals week, facing Mississippi Valley State on Friday, Dec. 6, at 7 p.m. and Wednesday, Dec. 11, at 7 p.m.

Other notables from the game

Missouri State is now 4-1 when it wins the tip. The Bears have lost every game they’ve lost the tip in.

“I was disappointed in that. What (Murray State’s Anthony Smith) did to us, that’s what we do to people,” Ford said. “We told them in the scouting that 24 is like a Missouri State, and he just whipped us on the glass — and almost won them the game. Luckily, he fouled out.”

Smith ended with 12 points and 10 rebounds in 25 minutes before fouling out with 1:05 left in the second half.

Freshmen got big minutes for the Bears against Murray State. Cooper Jr. ended with 22, Isiaih Mosley had 15 and Ja’Monta Black’s first start gave him 32 minutes on the court.

“I thought those guys did a phenomenal job tonight against a well respected opponent — against a program that knows how to win,” Ford said. “Here’s one thing I can tell you about our freshmen: they’re not afraid. They’ve been in big games, even in high school. They do a good job.

“The freshmen stepped up big,” Cook said. They executed down the stretch. We needed it. They’re fitting in pretty good. They don’t really look like freshmen — they’ve got a bright future.”

Gaige Prim has been what Ford calls a “precautionary” resting period. Ford said after Tuesday’s game Prim will be “load managed” due to an injury that could turn become more serious. Ford would not say what the injury specifically was.

Another slow first half for the men’s basketball Bears, but head coach Dana Ford said he’s going to build off a solid second half from his team.