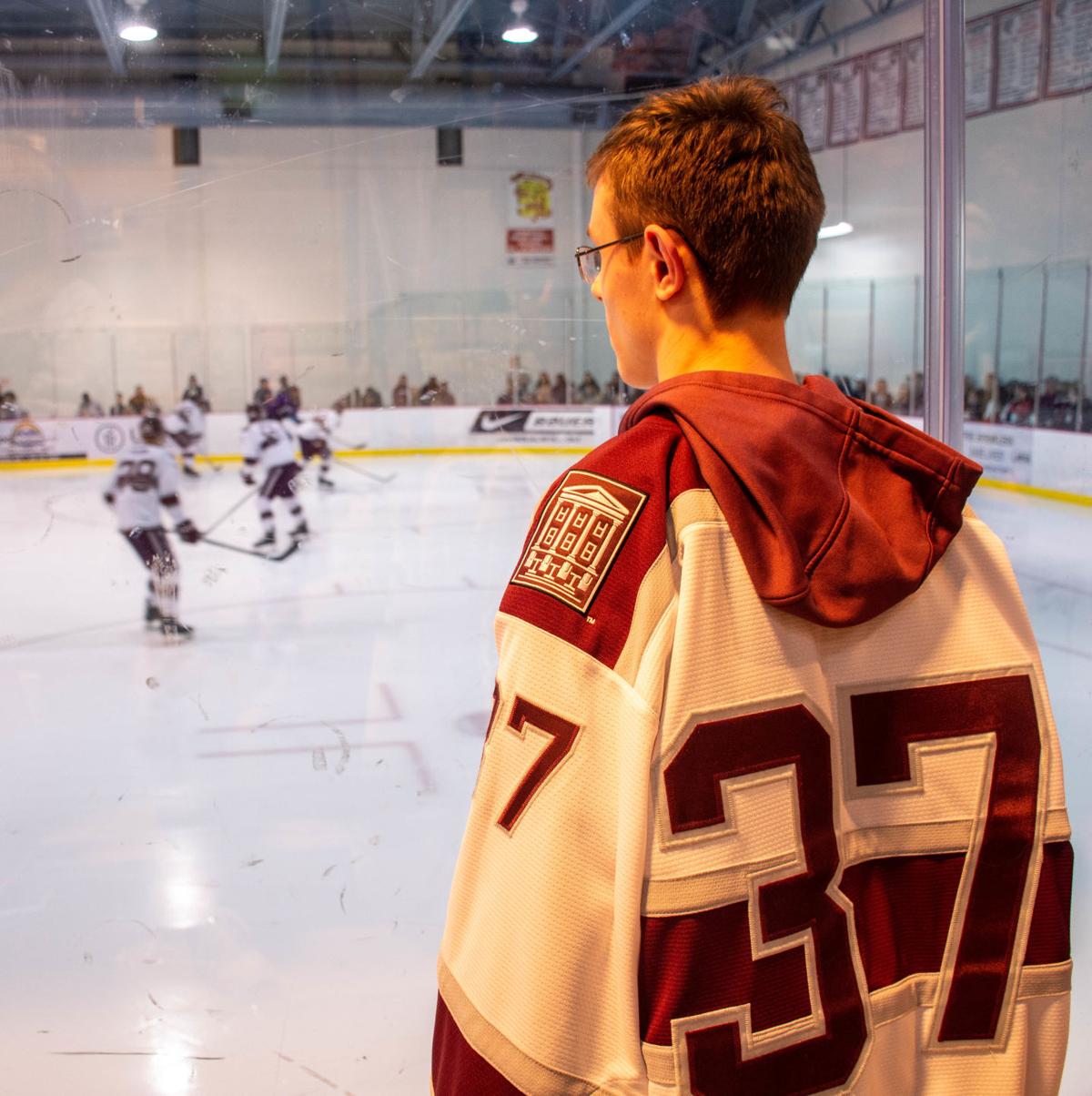 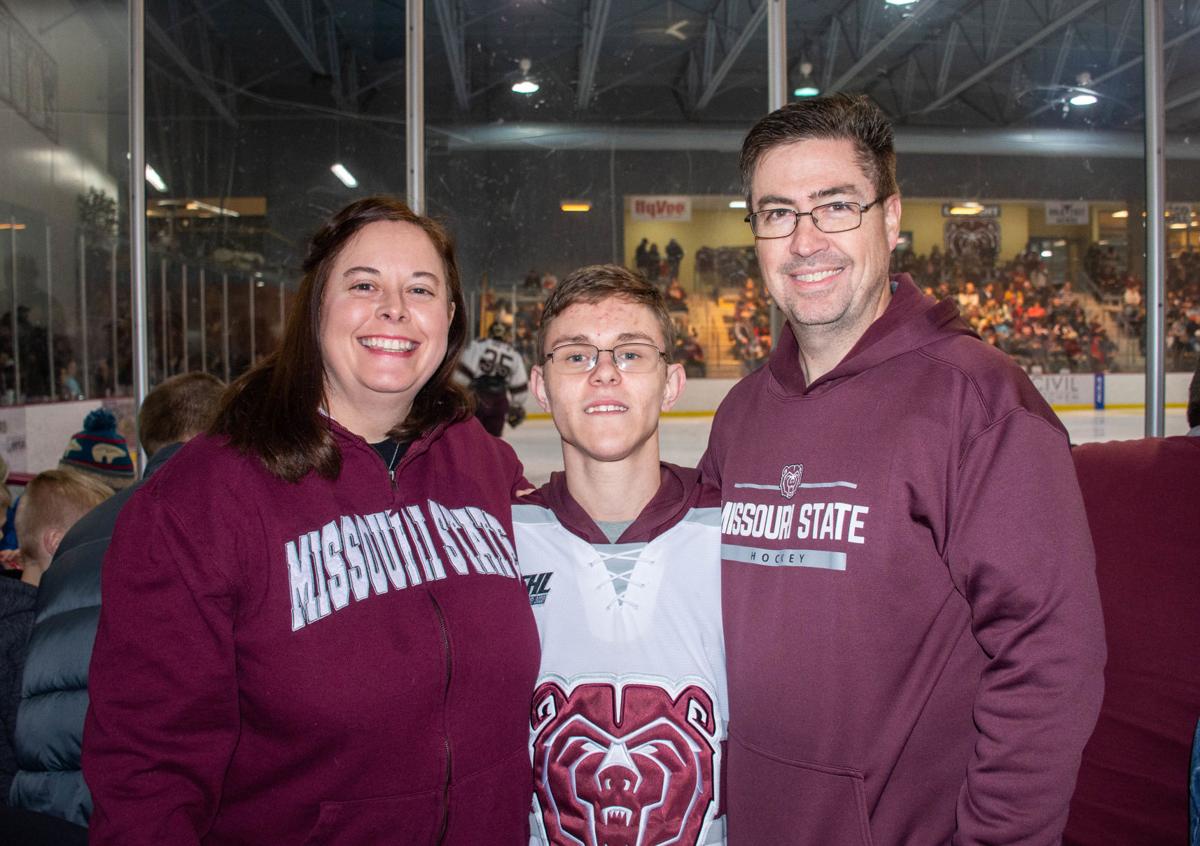 Dimitry Robertson, middle, poses with his parents Melette, right, and Stacy during an Ice Bears game.

Dimitry Robertson, middle, poses with his parents Melette, right, and Stacy during an Ice Bears game.

“This is the best thing that has happened to me.”

Dimitry Robertson has only been with the Missouri State Ice Bears for half a season, but he says he could not enjoy it more.

Robertson, a sophomore at Kickapoo High School in Springfield, was diagnosed with cerebral palsy at a young age. He had trouble fitting in  until the Springfield-based organization Champions Committed to KIDS connected him with the Ice Bears.

Champions Committed to KIDS connects children who have medical conditions and disabilities with athletic teams at both the high school and college level in Southwest Missouri.

Robertson’s father Stacy met with a  member of the organization to see if Dimitry would be interested in partnering with a team. Dimitry said he wanted to be a part of a hockey team, so the Ice Bears were a natural fit.

“They reached out to us about him, and we could not have said yes fast enough,” Ice Bears assistant coach Brendan McClew said.

Dimitry is as much a part of the Ice Bears as the players are — he shows up to most practices, attends all the home games and almost all of the road games, and celebrates with the team in the locker room after wins.

The team welcomed Dimitry the moment he was introduced to them. Head coach Jeremy Law said he brings a positivity and light-heartedness that lifts the team’s spirits.

“He’ll say whatever is on his mind,” McClew said after the Ice Bears beat McKendree University 6-2 for their first win in two months. “He came in tonight and said ‘Wow! This is so much more fun than losing,’ and it made us all laugh about a rough time.”

Saunders and a few other players have gone to Kickapoo to eat lunch with Dimitry several times.

“He is a blessing,” Saunders said. “If you have a bad day of classes, you come to practice and he is always there — always smiling and asking you how your day was. It’s kind of hard to have a bad day if he is around.”

Dimitry was with the Ice Bears in Oct. 2019 when the Stanley Cup came to Springfield. He said that is his favorite moment with the team.

Dimitry has a growing collection of hockey memorabilia that includes photos with the team and the Stanley Cup, players’ partially broken sticks, and a puck collection that includes a souvenir puck from the 1980 Winter Olympics — the year the United States hockey team beat the Soviet Union in the “Miracle on Ice.”

Stacy has a friend whose mother was at the 1980 Olympics, who gave Dimitry the puck.

Dimitry’s mother Melette said she is thankful for the opportunity he has to fit in somewhere.

“This is kind of his first opportunity to have friends, and that’s been the best part for us,” Melette said. “It’s been hard in the past in that way.”

Melette said how the team functions as a family stands out to her. They have met a lot of the players’ parents, members of the Ice Bears booster club and fans of the team who have welcomed them with open arms.

Dimitry is going to be with the Ice Bears for the rest of this season and all of the 2020-21 season.

Ice Bears founder Stan Melton said Dimitry is just as much of a positive force for the team as the team has been for him.

“Things like this make you a better person,” Melton said. “The players will be able to take the lessons from this, and they’ll apply for the rest of their lives.”

“These guys are my family,” Dimitry said. “They are just so good to me.”

The Ice Bears swept a two-game series against No. 25 McKendree University on Friday and Saturday nights.

The Friday night game was a 6-2 Ice Bears victory and the season debut for senior defenseman Brian Shumacher. Shumacher played for the Ice Bears in the previous two seasons but was unable to play in the fall semester of this season.

“He was our best player tonight,” McClew said. “He blocked more shots tonight than he has in his entire MSU career.”

MSU won 4-2 on Saturday night. Griffin stopped over 30 shots in the win.

Saunders said the two games were a full-team effort, something he said has not quite been there in the recent past.

“It’s been two or three forward lines and two D-pairs playing well in the past, but this weekend all of us were there,” Saunders said. “We talked in practice about holding yourself accountable, and we did that.”

The No. 21 Lady Bears defeated Bradley and Illinois State to take sole possession of first place in the Missouri Valley Conference over the we…