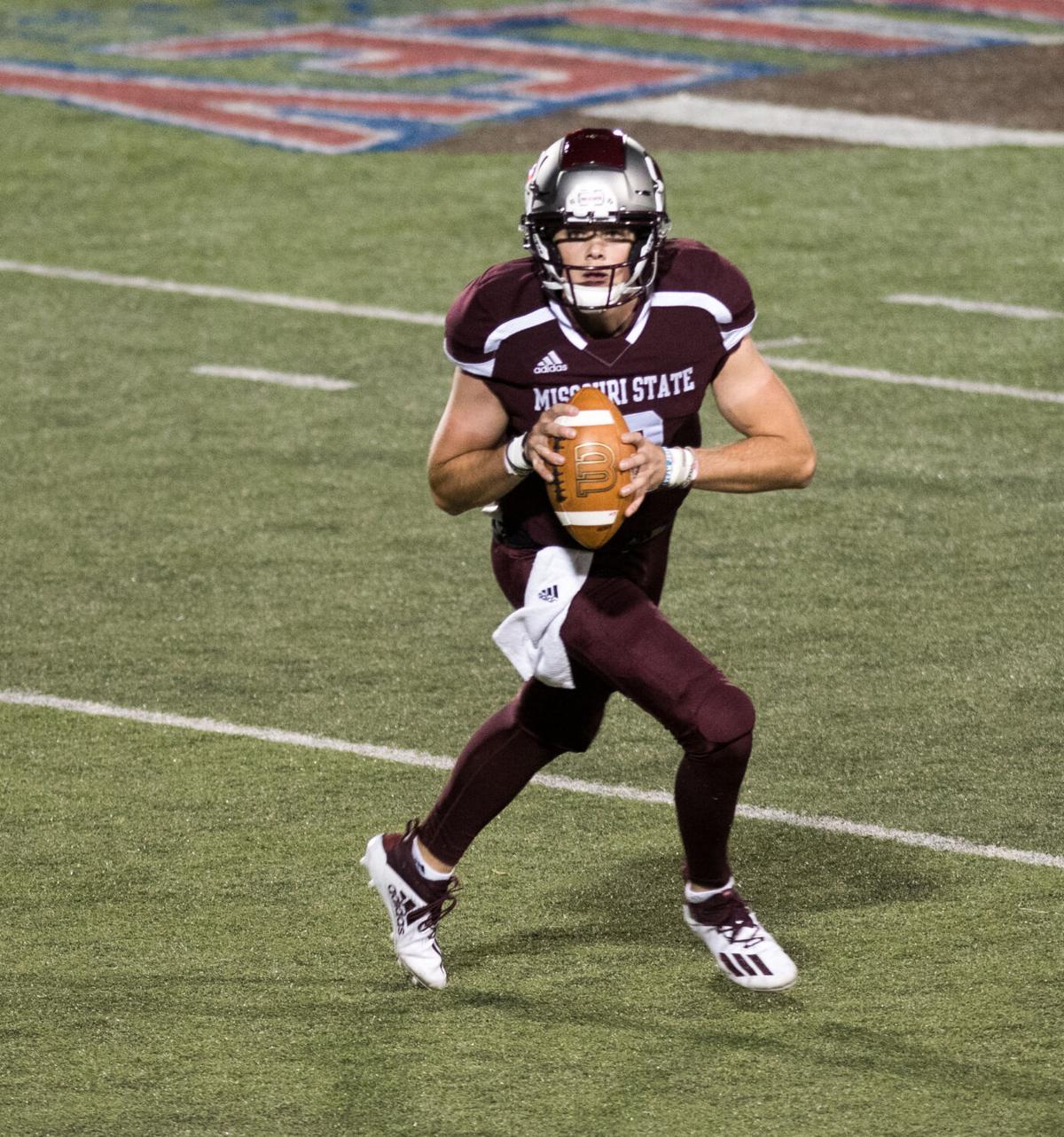 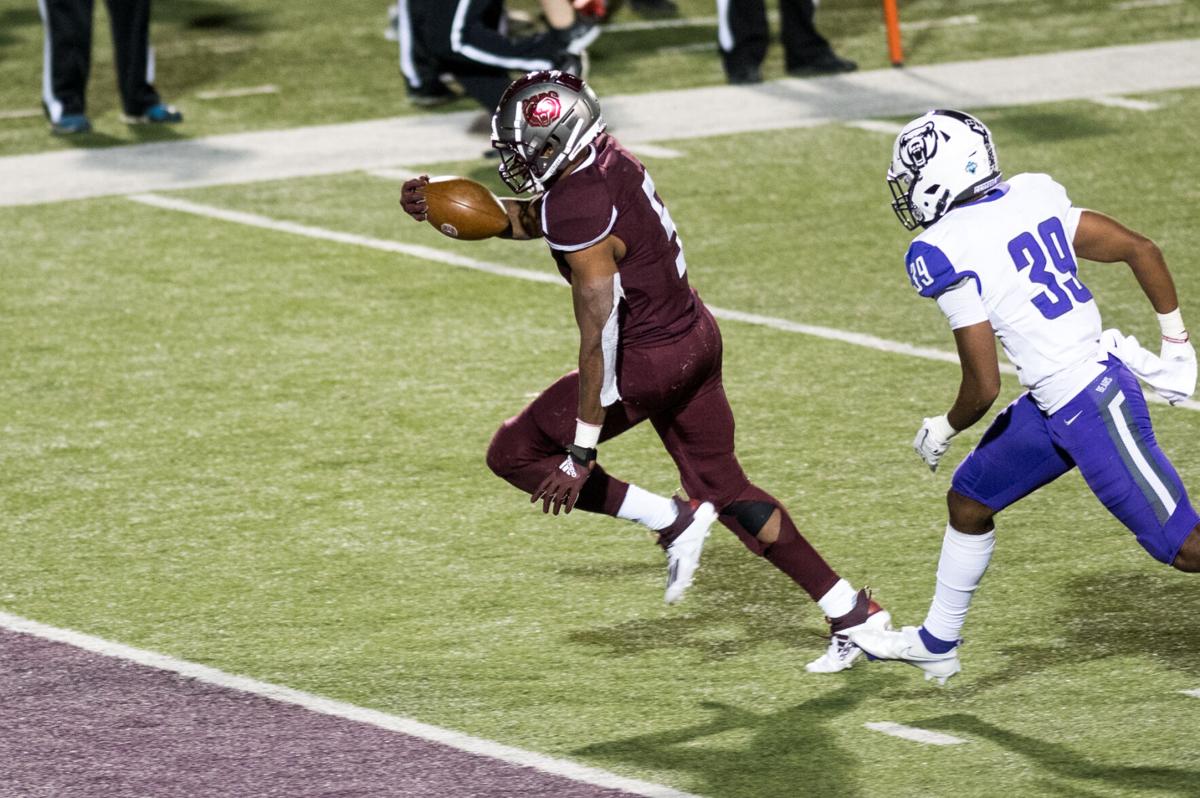 Sophomore running back Jerimiah Wilson runs for a touchdown against Central Arkansas.

Sophomore running back Jerimiah Wilson runs for a touchdown against Central Arkansas.

The Missouri State football team fell to 0-3 in the shortened fall season after losing its final game to the University of Central Arkansas 34-23 on Saturday, Oct. 16.

Lack of ball security was the downfall of MSU’s offensive success in the first half. An interception thrown by redshirt freshman quarterback Jaden Johnson and a fumble by sophomore running back Jeremiah Wilson killed MSU drives and gave UCA the ball in desirable field position in the first quarter.

“The turnovers killed us,” head coach Bobby Petrino said. “But our guys competed extremely hard and we showed some explosiveness in offense.”

The MSU defense stymied the UCA offense in the first half. UCA tallied 102 yards and averaged 2.9 yards per play. The defense also got stops when it mattered, holding UCA to 1-8 on third downs in the first half.

“I really feel like we’re a really good defensive football team,” Petrino said. “We put (the defense) in bad positions but they can get after the quarterback, and we defend the run well most of the time.”

The offense found a rhythm late in the first quarter. A 28-yard run by Wilson was followed up by a 29-yard pass from Johnson to junior wide receiver Damoriea Vick, setting up a 1-yard touchdown for junior running back Keshun Parker. On the following possession, junior running back Kevon Latulas took a handoff 63 yards down the left sideline for a touchdown giving MSU a 14-3 lead.

While the scoring started, the turnovers did not stop. Johnson’s second interception of the half was taken for a touchdown, shrinking the MSU lead to four. Johnson followed the interception up with a fumble that was recovered by Central Arkansas in MSU territory. UCA quickly scored and took a 17-14 lead on a pass from junior quarterback Breylin Smith.

After turnovers on back to back possessions, Johnson was benched for freshman quarterback Jake Van Dyne. Van Dyne completed three passes for 47 yards on the drive, setting up Wilson for a 9-yard touchdown run. That run gave MSU a 21-17 lead with 4:13 left in the half.

“I think he (Johnson) needed a break,” Petrino said. “After having the interception for a touchdown and the fumble I think he needed to get a break.”

Van Dyne took the field for another drive and MSU came away with another score. Sophomore Jose Pizano’s 30-yard field goal gave MSU a 24-17 lead going into halftime.

After holding the UCA offense to only 10 points in the first half, the MSU defense gave up 16 points in the third quarter. Three field goals by junior kicker Hayden Ray and a receiving touchdown by sophomore Tyler Hudson gave UCA a 33-24 lead entering the fourth quarter, a lead they would never relinquish.

After putting up 24 points in the first half the MSU offense struggled to sustain drives in the second half.

“The second half was a different story offensively,” Petrino said. “We didn’t control the line of scrimmage, we got pressured, quarterbacks didn’t take care of the ball, and we had a lot of errant snaps that hurt us a lot.”

The Bears offense only totaled 34 yards in the second half, and never had a drive longer than seven plays. Not only did MSU struggle to move the ball, but they also struggled to hold on to the ball.

Van Dyne added to the turnover total, throwing two interceptions in the third quarter and nearly fumbled the ball on a scramble.

UCA found success when they used a hurryup style of offense. This often led to misalignment by MSU and resulted in multiple positive gains.

UCA’s defense also looked like a more improved unit in the second half. The Bears blitzed early and often and committed more to the MSU run game that was gashing them in the first half. The Bears continually got pressure on the quarterback, tallying six sacks on the night.

“We’ve gotta get where we don’t put them in bad positions,” Petrino said. “We’ve gotta make teams drive the ball. I think that will play into us being a better team.”

MSU found its first offensive success of the second half with roughly four minutes left in the fourth quarter. The drive lasted seven plays and totaled 20 yards, the Bear’s most successful drive of the second half.

The Bears will be off until Feb. 20 for a game at North Dakota.