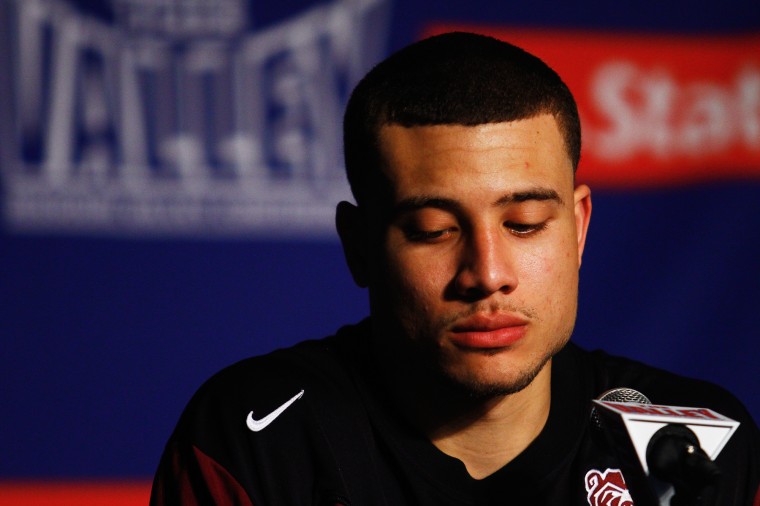 Missouri State senior Kyle Weems at the post-game press conference at the Scottrade Center in St. Louis in the first round of the Missouri Valley Conference Tournament. The Bears lost 72-64 ending their chances at a NCAA Tournament. 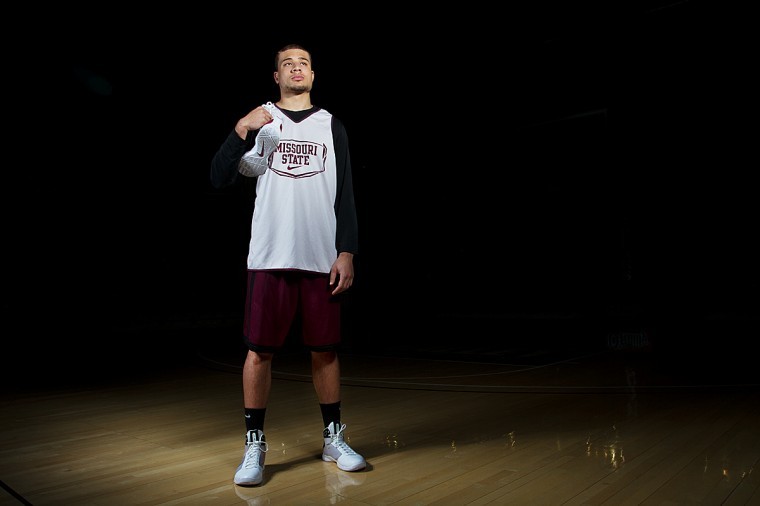 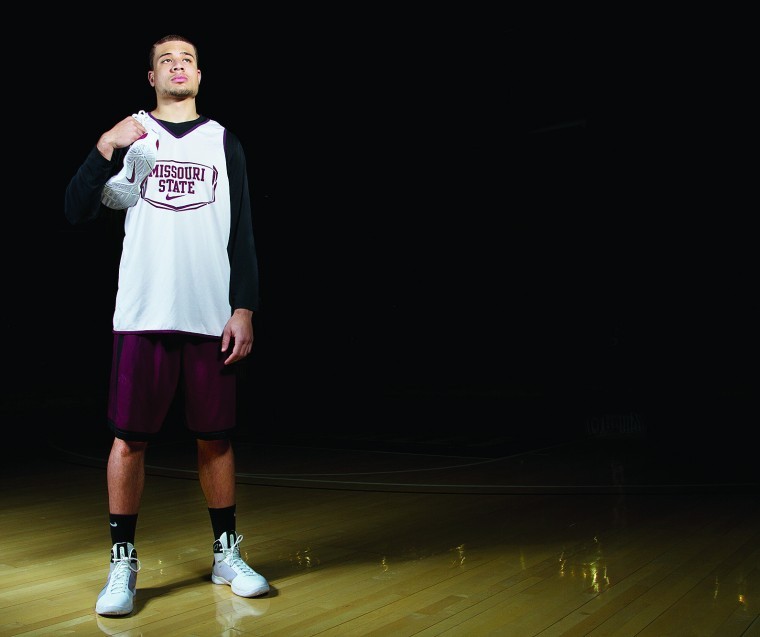 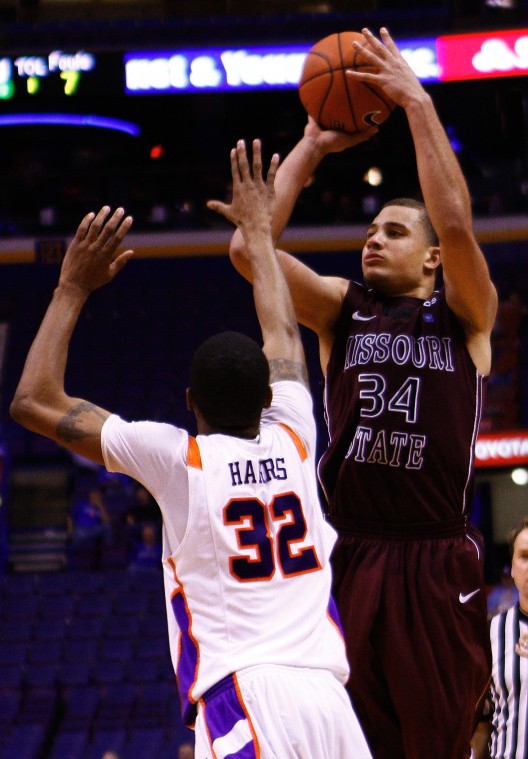 Missouri State senior Kyle Weems puts a jumper up over Evansville senior Kenneth Harris at the Scottrade Center in St. Louis in the first round of the Missouri Valley Conference Tournament. The Bears lost 72-64 ending their chances at a NCAA Tournament.

Missouri State senior Kyle Weems at the post-game press conference at the Scottrade Center in St. Louis in the first round of the Missouri Valley Conference Tournament. The Bears lost 72-64 ending their chances at a NCAA Tournament.

Missouri State senior Kyle Weems puts a jumper up over Evansville senior Kenneth Harris at the Scottrade Center in St. Louis in the first round of the Missouri Valley Conference Tournament. The Bears lost 72-64 ending their chances at a NCAA Tournament.

Every morning when Kyle Weems wakes up, he immediately grabs his phone and scrolls through Twitter in hopes of news the Italian government has canceled the rest of the Lega Basket Serie season due to the coronavirus pandemic.

“And each day there is no news,” Weems said in a tweet. “How long can this possibly drag out?”

Since leaving Missouri State in 2012, Weems played eight seasons of professional basketball overseas, including his first with Virtus Bologna in 2019-20. The Italian team’s last five games were canceled due to the virus.

Italy has the highest number of coronavirus deaths in the world, and the remaining seven games on the schedule look unlikely.

“It’s honestly been sad to see,” Weems said. “Everyday for the last month or so has been to the gym and back home for me.”

The former Missouri State star said the last five days have been the toughest in the country. The virus has spread with at least 4,500 new cases per day and at least 420 deaths — the most being 793 deaths on March 21.

Weems said he doesn’t know what the league is waiting on, and there shouldn’t be another game played this season — even with no fans in attendance. He said the players have the luxury of their own practice gym, but they only practice with three people at a time.

“With the cases getting worse, all of our practices got canceled this week, and we can only go to the grocery store and back home,” Weems said.

Weems said the most difficult thing for him is not getting to see his wife, Jacque, and two kids, Kyrie and CJ. He said he sent them back to the United States about a month ago before Italy’s situation worsened.

Jacque said Kyle’s time away from the family has been difficult in many ways.

“Besides the obvious of me just missing the presence of my husband and worrying for his safety, there is having to explain to our children why Daddy can’t come home yet,” Jacque said. “With our area in Overland Park, Kansas, being at a stay-home order, I am missing the extra help he provides with the kids.”

Weems said he had the intuition that it would get better, but it hasn’t shown any signs of that.

“Another tough part is the waiting and not knowing,” Kyle said. “We are just waiting on the government to say all sports seasons are canceled for the rest of the year so we can go home.”

Jacque said the reality is there is no running from the virus, and no matter where people are in the world — if they are not taking precautions the World Health Organization or Centers for Disease Control and Prevention recommends — those people are in danger.

She also said she would be more relieved if Kyle was home and the family could wait out the situation together, but she understands he has a job.

“My main concern while he is still in Italy is the health care system already being overwhelmed, and we all know that even with precautions you can still find yourself unlucky and infected,” Jacque said. “And if that were to happen to him, it scares me that the health care system wouldn’t be able to care for him.

“Not because of their lack of knowledge, but simply because they are overwhelmed and depleted at the moment. My other concern is if they were to start playing or practicing again - they risk getting injured, having to go to the hospital and be exposed that way.”

And, of course, working out for the slim chance the basketball season does continue.

Kyle, a 6-foot-6 forward from Topeka, Kansas, came to Missouri State in 2007. After redshirting in 2007-08, Kyle started in his freshman season and averaged 10.2 points per game and was named to the Missouri Valley Conference All-Freshman team.

Kyle helped the Bears to the CollegeInsider.com Tournament championship as a sophomore. He averaged 13.6 points per game that year.

In his junior season, Kyle became a force in the MVC. He upped his averages to 16 points and 6.8 rebounds per game, leading Missouri State to its first MVC regular season championship.

Kyle said he still follows the Bears and Lady Bears basketball programs, especially since his wife is a former Lady Bear.

“It’s been an exciting last couple years to follow the Lady Bears with all their success,” Kyle said. “As for the Bears, there is no doubt in my mind that Coach (Dana) Ford will get them to the NCAA Tournament. His enthusiasm and recruiting has been great, and I look forward to them putting the pieces all together.”

Like most around the U.S., no March Madness during this time has been unfathomable.

“March with no March Madness has almost been unreal,” Kyle said. “It’s my favorite time of the year and just doesn’t seem right.”

If the basketball season in Italy is canceled and Kyle is cleared to fly and return home to the U.S., it will certainly be an emotional moment for the Weems family.

“I can’t wait to see him, for sure,” Jacque said. “Our kids have told him numerous times how much they miss him and even try to whine for him to return home. I rest in solace knowing that we will not take that moment for granted when it does come.”

With the sports world ground to a halt, the shutdown created by the novel coronavirus has put the Missouri State club hockey team in an odd position.