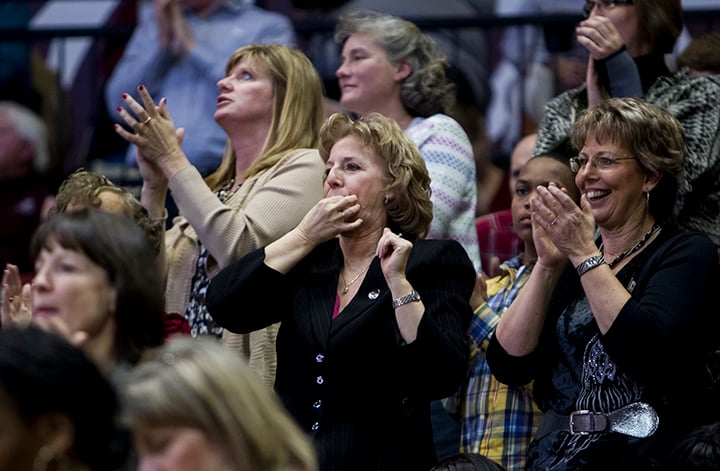 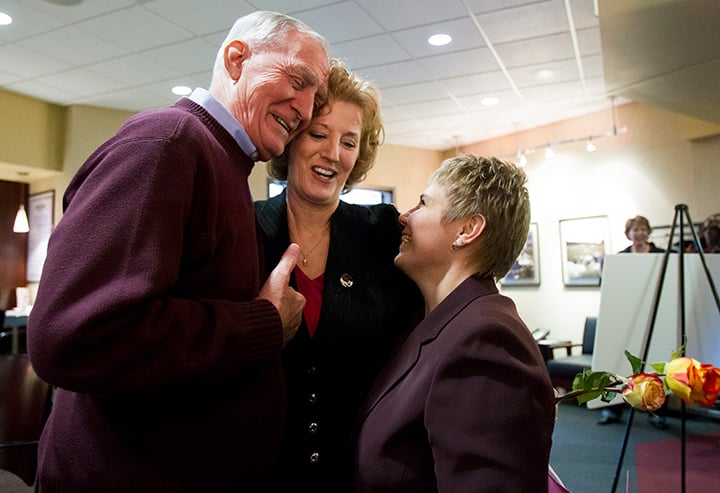 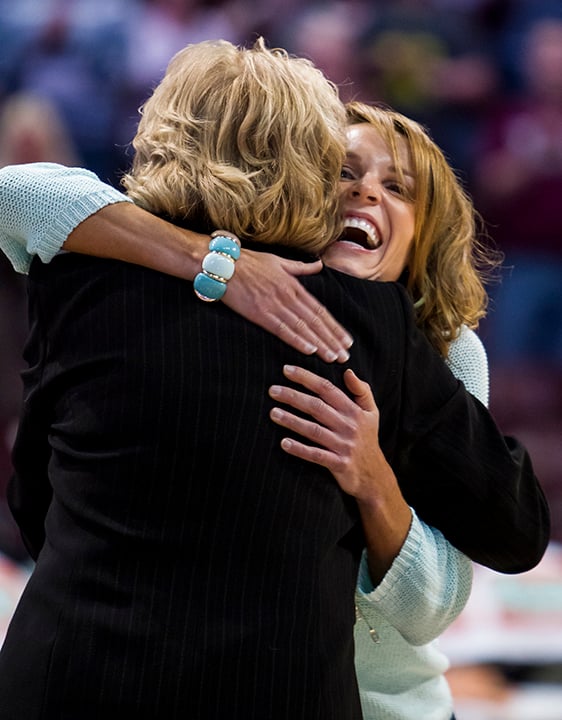 Lady Bear great Jackie Stiles embraces Cheryl Burnett as she is recognized at halftime with an honorary jersey banner presentation on Sunday, Feb. 3, 2013 at JQH Arena. Steph Anderson | The Standard 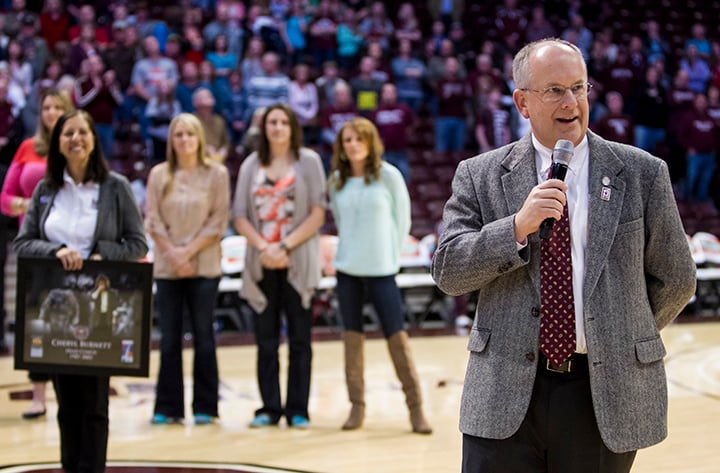 Missouri State president Clif Smart introduces Cheryl Burnett as she is recognized at halftime with an honorary jersey banner presentation on Sunday, Feb. 3, 2013 at JQH Arena. Steph Anderson | The Standard 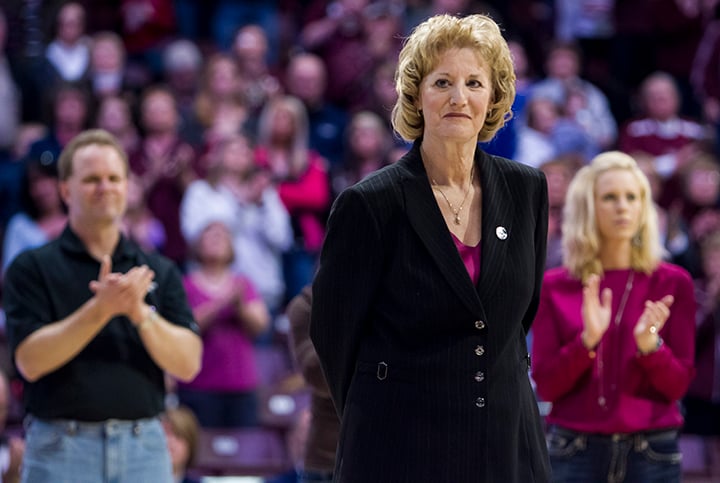 Cheryl Burnett is recognized at halftime with an honorary jersey banner presentation on Sunday, Feb. 3, 2013 at JQH Arena. Steph Anderson | The Standard

Lady Bear great Jackie Stiles embraces Cheryl Burnett as she is recognized at halftime with an honorary jersey banner presentation on Sunday, Feb. 3, 2013 at JQH Arena. Steph Anderson | The Standard

Missouri State president Clif Smart introduces Cheryl Burnett as she is recognized at halftime with an honorary jersey banner presentation on Sunday, Feb. 3, 2013 at JQH Arena. Steph Anderson | The Standard

Cheryl Burnett is recognized at halftime with an honorary jersey banner presentation on Sunday, Feb. 3, 2013 at JQH Arena. Steph Anderson | The Standard

Cheryl Burnett will forever be connected with Lady Bears basketball.

Those were her teams and her players.

The month of March marks the anniversary of the Lady Bears’ two Final Four runs in the NCAA Tournament — first in 1992 and latest in 2001.

“Crazy, just crazy (that it has been this long),” Burnett said in a phone interview on Friday.

And ESPN recently aired then-Southwest Missouri State’s stunning of top-seeded Duke in the Elite Eight during its 2001 NCAA Tournament run, which took Burnett back to the old days.

“It’s the first time I’ve watched it on ESPN,” Burnett said. “I’ve never heard any of the broadcasts. I actually didn’t think we played that well when I rewatched it. Jackie’s performance got all the attention, of course.

“I had to text Melody Campbell and say, ‘Your defensive performance was one of the best I’ve ever coached.’ It was an amazing, amazing run.”

Adding to her illustrious resume

Burnett has received several Coach of the Year awards, been inducted into multiple Hall of Fames and was named a Sports Legend by the Missouri Sports Hall of Fame in 2015.

On March 25, she added another award to her illustrious resume: The Missouri Basketball Coaches Association announced Burnett is the newest recipient of the Gary Filbert Lifetime Achievement Award — the highest honor given by the coaches association every year.

“I’m very pleased because I’ve always been a Missourian first and foremost coming from Centralia, Missouri,” Burnett said. “I knew Gary well. He passed away, but I knew him well throughout the years. That adds a real emotion.

“We really tried to recruit Missouri kids. That was always our recruiting strategy. Missouri coaches were so important to that, and they really supported our program by sending their kids to us.”

Burnett said she found out she would receive this honor on March 20 after a phone call from president of MBCA Jeni Hopkins. She said she was immediately surprised when she learned the news.

“Getting the call from her was very special,” Burnett said. “It’s quite the prestigious award the MBCA has put together.”

Her tutelage has certainly left a lasting impact on her former players.

“It’s hard to even put into words the tremendous impact that Coach Burnett has had — and still has — on my life and career,” Stiles said. “She empowered me to be better and do more than I ever thought was possible. Coach Burnett has taken me places both as a player and a coach that I could not have gone by myself. I am forever grateful for how she has not only touched my life but the lives of countless others.  She is so deserving of the Lifetime Achievement Award.”

Former Lady Bears head coach and current Tennessee head coach Kellie Harper said Burnett was  both welcoming and supportive of her and the staff while Harper was at Missouri State.

“She is impressive and someone that I admire,” Harper said.

Burnett admitted she misses coaching, especially the relationships she cultivated with players like Stiles. Stiles said one of her favorite Burnett stories is when she came to her first game at Oklahoma to support Stiles as a coach.

“I think all of us have maintained amazing relationships over the years,” Burnett said. “I still love being on the court and it’s that daily relationship and intensity. Every little challenge that a player might accept and take. That’s the part I miss most.”

Harper said her favorite Burnett memory goes back to 2015. Missouri State hosted a coaches clinic, and Burnett was an on-court speaker.

“She was so intense and loved being on the court,” Harper said. “She utilized our practice players, and I’m pretty sure that a few of them had never been yelled at like they were that day.

“Simply put, she is awesome.”

First was the team’s deepest run in the NCAA Tournament last year in the Sweet 16 since the days of Burnett and Stiles.

“I will start a little bit with last year and what Kellie did with the program,” Burnett said. “And then certainly Jackie as a member of the staff — getting to follow that so closely — I just have an incredible sense of pride.”

After Harper departed to take over as head coach at Tennessee, Amaka “Mox” Agugua-Hamilton was hired and guided the Lady Bears to a historic season. Missouri State’s 26 wins represents a school and conference record for a first-year head coach.

Mox is the second first-year coach in Missouri Valley Conference history to earn Coach of the Year and brings the award to Missouri State for a sixth time.

“With Coach Mox coming in as a first-year head coach, I stay in close touch with her, and she’s been really incredible at communicating and engage me and our alumni in the program,” Burnett said. “I think this could be the single-best — certainly that I’ve ever seen — a first-year head coach coming in (and making an impact). I’ve been so incredibly impressed with the things she’s done on the court and off the court.”

This season also would have been back-to-back trips to the NCAA Tournament for the Lady Bears, but March Madness was canceled due to the coronavirus.

“It breaks my heart just talking about it,” Burnett said. “Those seniors worked their entire lives for that opportunity — it’s devastating for all of us to watch.”

For nearly three decades, Burnett lived and breathed coaching. She always had dreams of a house on the lake before retiring. She said she is still involved in the game of basketball and loves to mentor coaches, but she is selective on what she does with the sport.

Burnett now spends her days sitting out on her back deck that overlooks Table Rock Lake while doing some gardening and landscaping.

“I’m breathing the good air and I’m like, ‘Boy, that was hard work. I can’t work that hard anymore,’” she said. “I’m living the blessed life here.”

The Missouri State Lady Bears had high hopes as they headed to the Missouri Valley Conference Tournament last week.