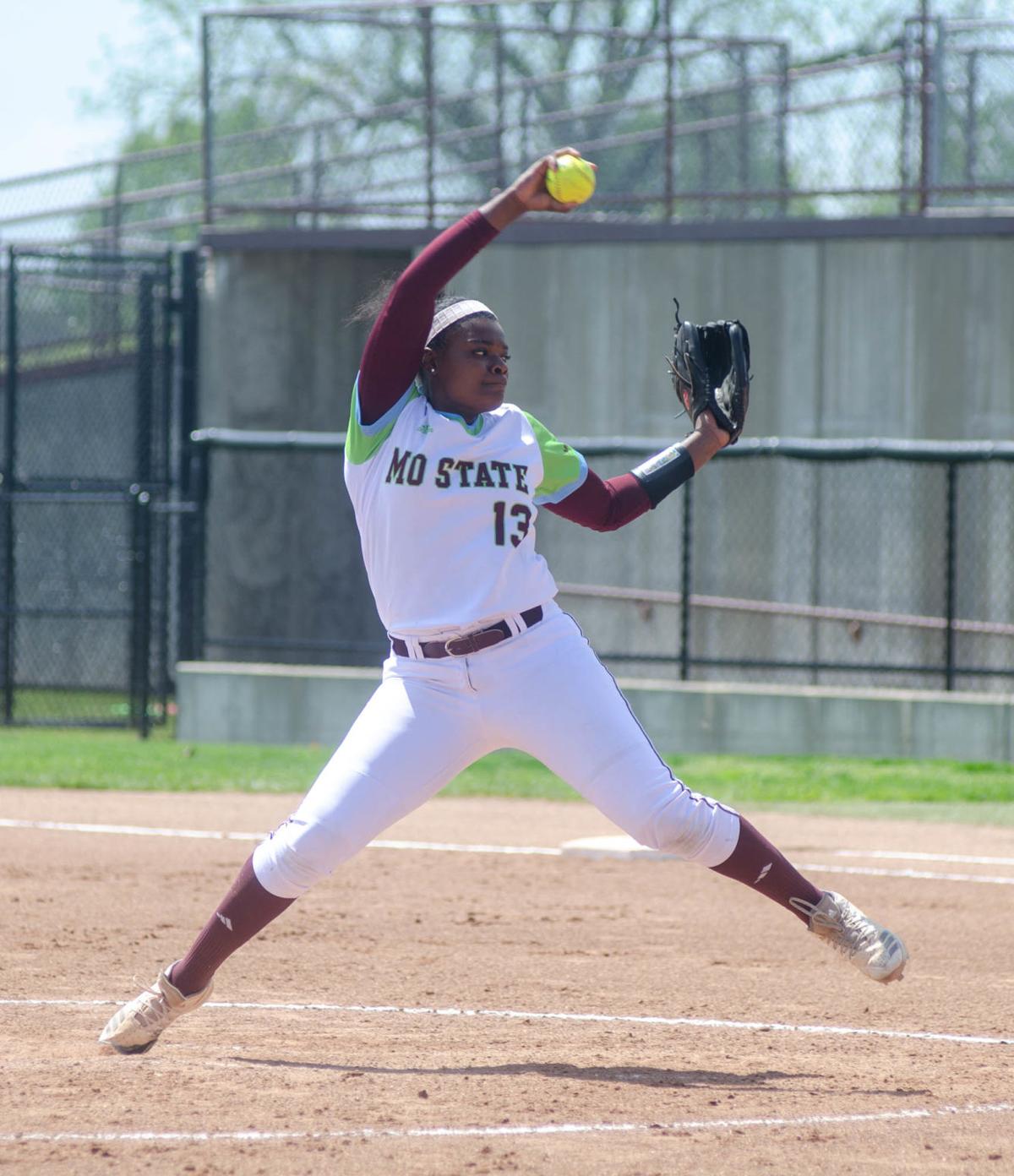 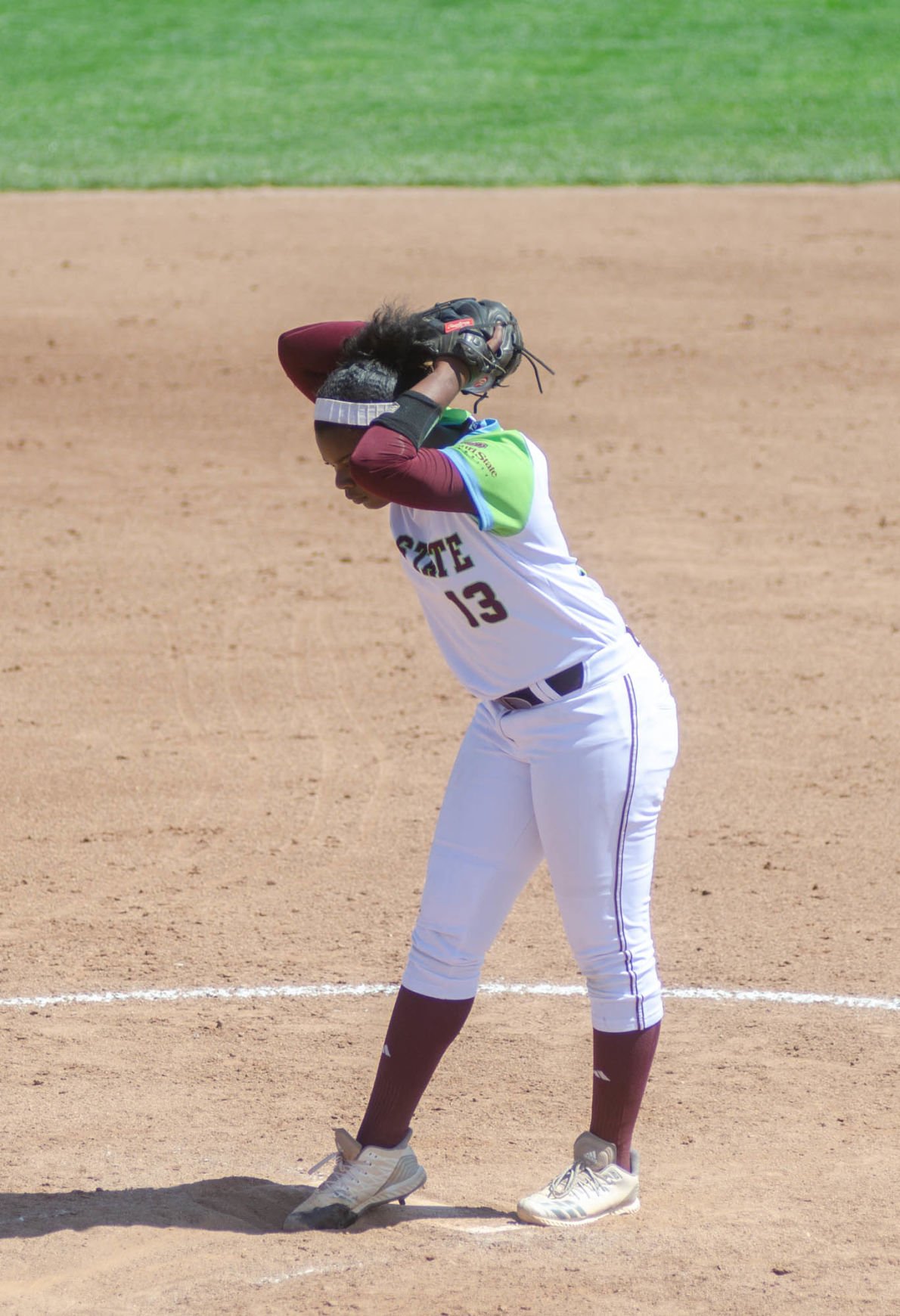 Steffany Dickerson winds up to pitch.

Steffany Dickerson winds up to pitch.

After a troubling freshman year, one of Missouri State’s top pitchers is working toward her goal of becoming an All-American.

Missouri State sophomore Steffany Dickerson attributes most of her success to her support system. After working through one trial after the next last season, she is excited to be where she is at now.

Her nickname since she was 12 years old, according to her dad, Michael Dickerson, is Jackpot.

“At 12 years old she said she wanted to play DI college softball,” Michael said. “We switched to another team and during tryouts one of the parents saw Steffany and said, ‘She can play outfield, she can pitch, she can play shortstop. We’ve hit the jackpot!’”

Steffany came from a long history of being top dog amongst her teammates.

“For my high school, I was the only pitcher, so I had to pitch every game,” Steffany said. “We had a tough schedule and played a lot of great teams in Oklahoma, so it came down to ‘do we want to win?’”

As a multi-sport athlete for two years in high school, Steffany had developed the endurance to survive an intense season pitching many games. Her successful senior year resulted in a nomination for Oklahoma Gatorade Player of the Year.

In each state, one player is picked for every major sport as the player of the year based on athletics, academics and character.

“Just to be nominated for that and to have your application looked at was really cool,” Steffany said.

Her extremely successful high school career boosted her for looks from MSU.

“It was a really long process, but Beth Perine followed me a lot my junior season, and she really made it seem like home to me,” Steffany said. “She was like a second mom to me.”

Perine is the associate head coach for MSU.

After stepping on campus, the decision was made immediately, and Steffany knew Missouri State was where she was meant to be.

Her freshman year, Steffany started 12 games and made 24 appearances. She collected 80 strikeouts in 84.1 innings and maintained a. 2.74 ERA.

The transition from high school to college was not easy for Steffany.

“I had a lot of ups and downs. My freshman year was not the best,” Steffany said. “I had a lot of trials and tribulations I had to go through, but my team and my coaches and all of my friends here really helped me get through it.”

Steffany leaned on her support system to get her through the difficult time.

“Prayer and my faith have really gotten me through a lot of this,” Steffany said. “Really just the team too. I wouldn’t change anything for them.”

Her support system did not stop at MSU but continued down south through her parents.

“My parents are amazing; they help me through a lot, and they sacrifice a lot for me to be here,” Steffany said.

No longer being the top dog on the team, Steffany also struggled to adjust to her new position on the team. It was the first time she ever had to manage something like that.

Michael and Vickie Dickerson were a big component of support for Steffany during this time as well.

“I told her ‘you have to have resilience and remember that this is your freshman year,’” Michael said. “Everything’s different, everything’s changing and it’s going to be an adjustment for anybody.”

Sweat, tears and much more led to a new-found level of confidence for Steffany as she moved into her sophomore year.

“The softball team has already suffered a lot of adversity, but just having each other’s backs makes anything possible,” Steffany said.

The softball team has suffered three injuries this season to starters. Junior Hannah Heinrich’s was involved in a car accident in the Kansas City area earlier this year. Assistant Director of Athletics for Communications Rick Kindhart said Heinrich underwent surgeries as a result of the accident, but did not comment more on the specific injuries.

“Immediately the team was so ready to fight for her and win for her,” Steffany said.

“We all just decided to fight for them,” Steffany said. “They can’t do it, but we can do it for them, and at the end of the season, everyone will get a ring.”

The softball team has been influential in Steffany’s experience so far at Missouri State.

“I’ve never seen a team glue together so much so fast,” Steffany said. “I think that’s part of the reason we’re doing so well right now.”

Heinrich and Greenlee are known as strong, vocal leaders on the team who lead by example. Their absence resulted in Steffany, along with other girls on the team, stepping up to make a difference on the field.

So far this season Steffany has recorded 126 strikeouts in 37 appearances, pitching 157 innings. She has not yet received conference honors, but it is a major goal of hers.

“Who doesn’t want to get MVC honors?” Steffany said. “I really just want to make a name for myself here.”

Her goal since she was 12 was to play college softball, but her goals do not stop there. She said shewants to be an all-American.

Steffany’s dad is excited to see her work towards these goals during her time at MSU.

As the season and her time at MSU continues, Steffany looks forward to growing with the team and seeing what they can accomplish.

“I’m really looking forward to the conference championship. I really think we have a good go at it this year,” Steffany said.