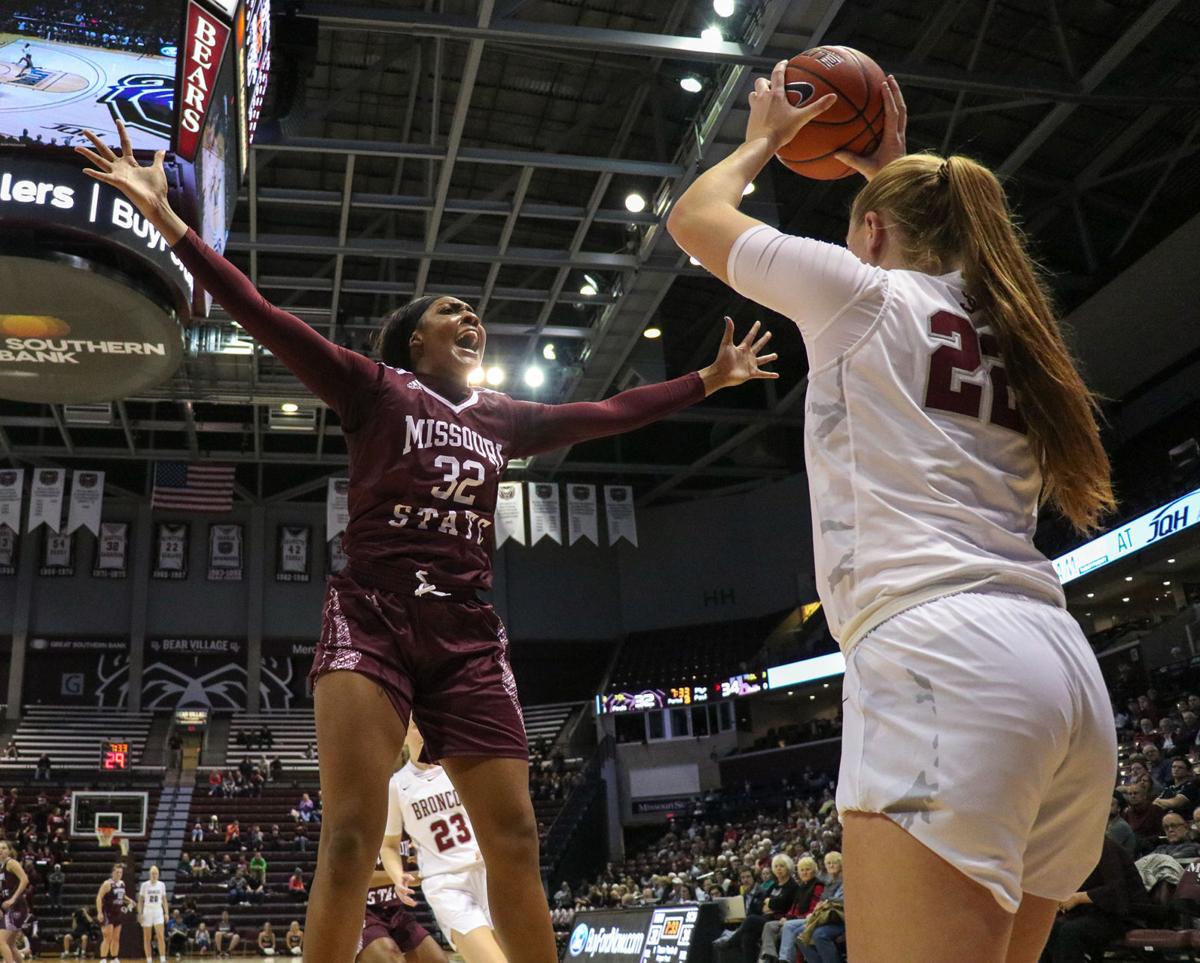 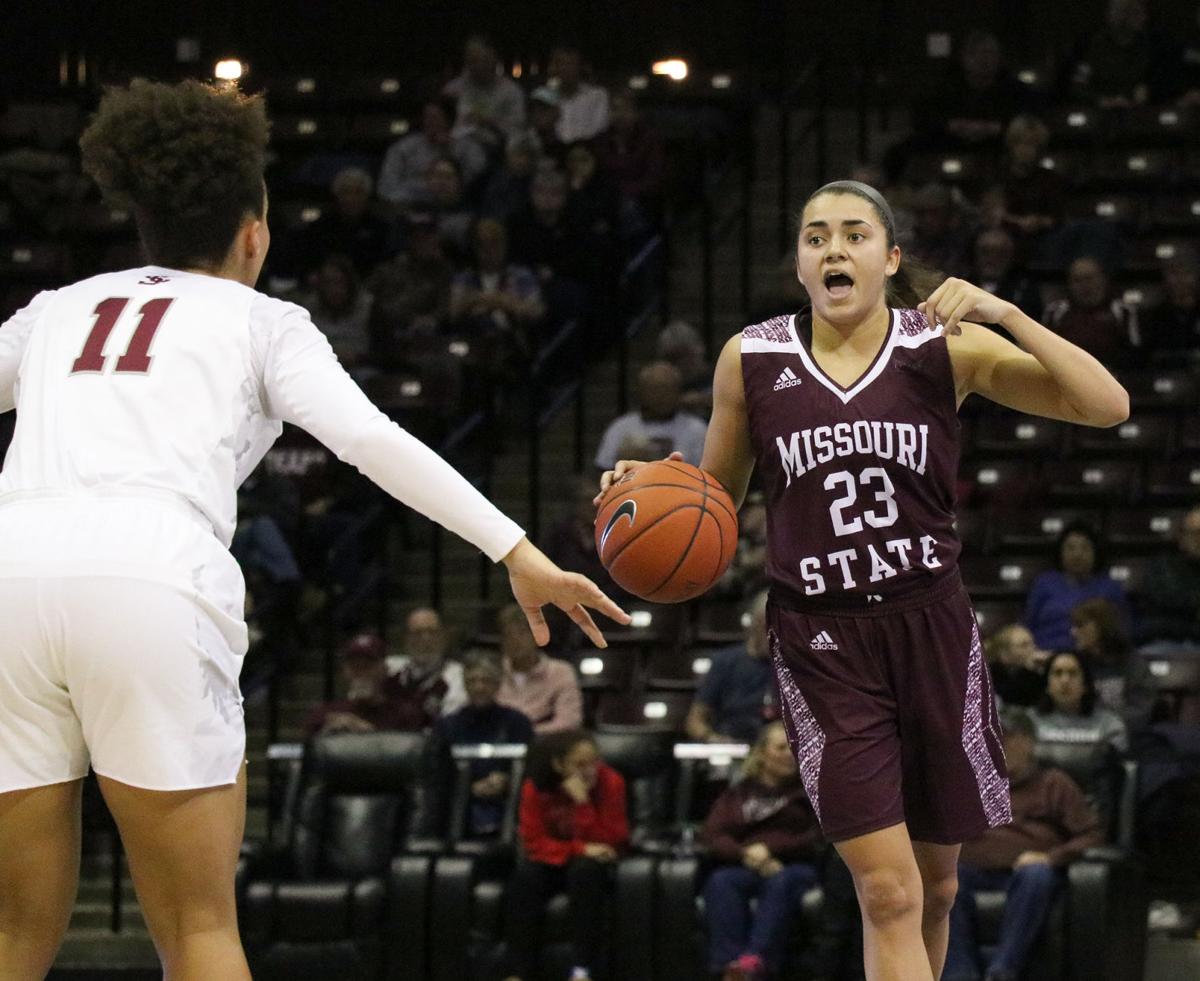 Sophomore Mya Bhinhar calls out to her teammates during the Lady Bears’ game against Santa Clara Friday night at JQH. The Bears beat the Broncos 71-64.

Sophomore Mya Bhinhar calls out to her teammates during the Lady Bears’ game against Santa Clara Friday night at JQH. The Bears beat the Broncos 71-64.

After suffering a heartbreaking loss at Southern Illinois last week, the No. 22 Missouri State Lady Bears bounced back on Friday night at Indiana State.

Missouri State needed only six minutes to jump out to a 17-6 lead in the first quarter and did not look back, cruising to a dominating 76-55 win over the Sycamores.

"We had some people step up and get back into a confident state," head coach Amaka "Mox" Agugua-Hamilton said in her postgame radio interview. "Some people were second-guessing themselves. We just had to have that breakthrough.

"I'm really happy to see people shoot the ball well. Our numbers were better. Free throws still need to improve and turnovers were terrible, but I'm pleased with how we played."

The Lady Bears, who shot 1-of-11 from beyond the arc against SIU, knocked down five 3-pointers in the opening frame en route to a 25-10 lead against Indiana State.

Missouri State and the Sycamores played well in the second quarter, resulting in a 39-24 lead at halftime.

Senior Alexa Willard hit 7-of-9 shots in the first half for a game-high 17 points. The Lady Bears shot nearly 52% as a team, hitting six threes while holding Indiana State to zero.

A late 11-0 run helped Missouri State to a 59-38 lead going into the fourth quarter.

Star sophomore Jasmine Franklin went down with an apparent injury late into the third quarter. Franklin slipped on her own and eventually had to be helped off the floor.

There was no contact on the play, but it appeared she had pain in the right side of her hip. However, she was seen walking around on the sideline after getting stretched out.

Franklin did not play the rest of the game.

Mox said after the game Franklin is OK. She was cleared to play in the fourth by trainers, but Mox said she wanted to play it safe and have her sit out with the big lead.

Junior Elle Ruffridge hit a pair of 3s in the fourth, helping the Lady Bears tie a season-high with 10 treys and secure the easy win on the road.

Missouri State finished shooting an impressive 50% from beyond the arc.

Willard led all scorers with 23 points on 9-of-16 shooting. Ruffridge finished with 12 points with every point coming off four 3-pointers. Junior Abby Hipp and sophomore Sydney Wilson had eight points apiece.

Up next for Missouri State will be Evansville at 1 p.m. on Sunday to conclude the three game road-swing.

Ice Bears try to battle out of slump

It has been two months since the No. 36 Ice Bears last skated off the ice having won a game — a 5-4 shootout win over Central Oklahoma.