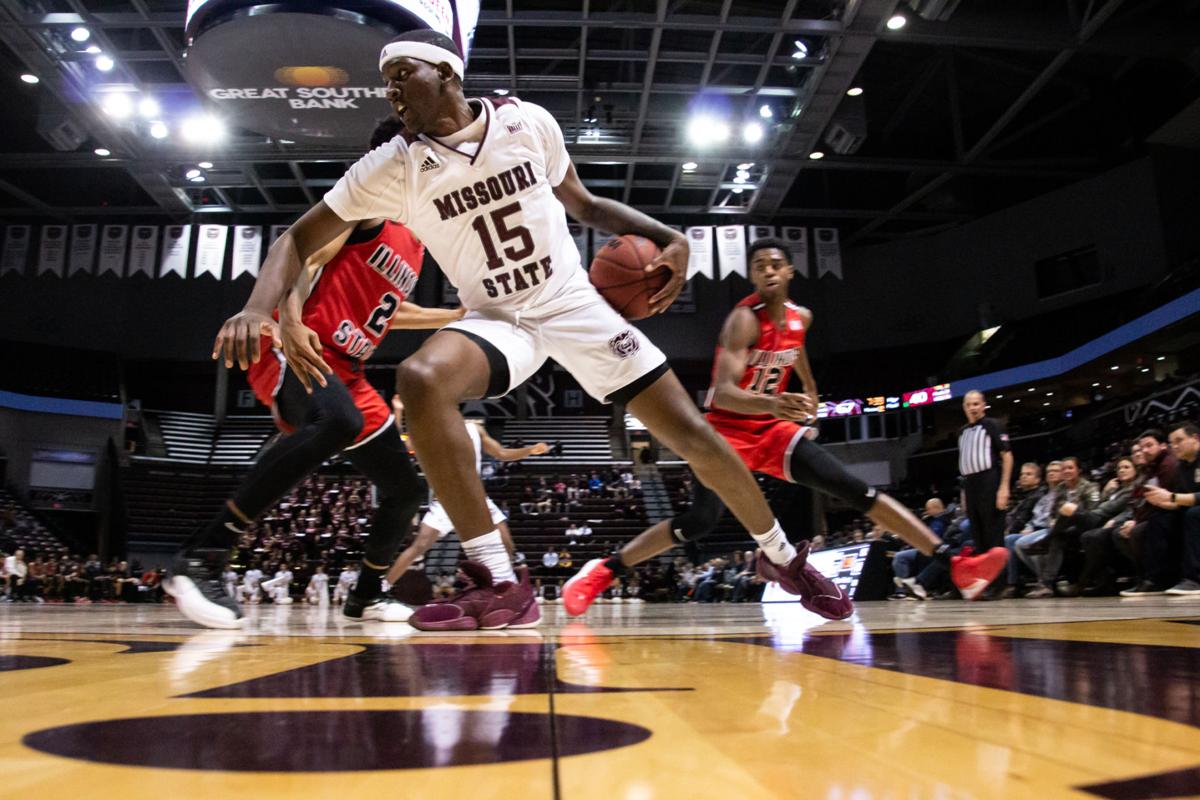 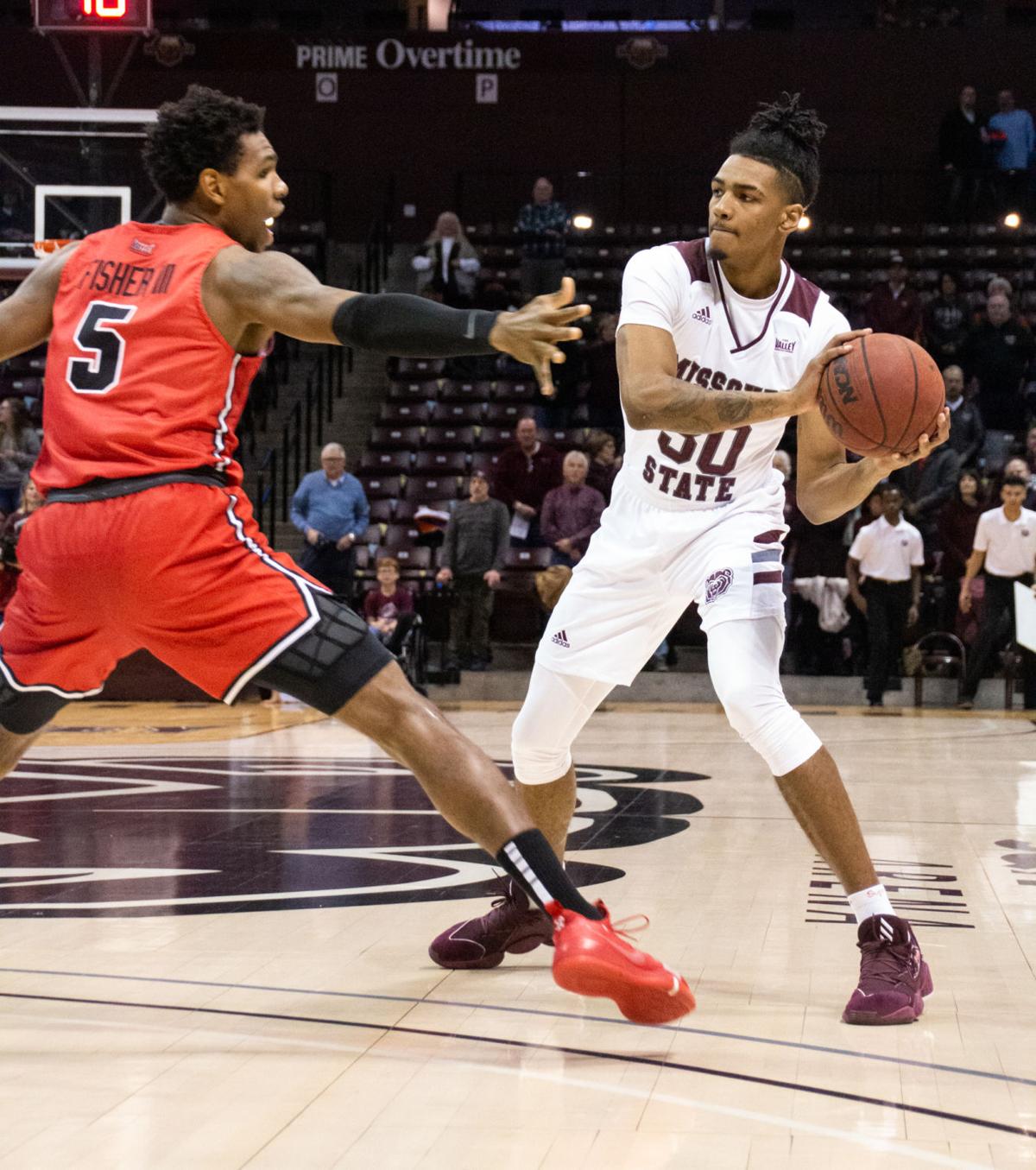 Senior forward Tulio Da Silva looks for a teammate to pass to. Missouri State holds their lead in the second half of Wednesday's game to defeat Illinois State 80-60.

Senior forward Tulio Da Silva looks for a teammate to pass to. Missouri State holds their lead in the second half of Wednesday's game to defeat Illinois State 80-60.

When Missouri State hosted Illinois State last season, Jarred Dixon launched a halfcourt shot at the buzzer for the win.

This year looked a lot different.

The Bears dominated the paint and the glass to pull out an 80-57 win over the Redbirds, snapping a three-game losing streak.

Senior Ross Owens found himself in the starting five on Wednesday — his first in a Bears uniform. The walk-on played 19 minutes against Illinois State and a career-high 26 minutes in Saturday’s loss to Indiana State.

Missouri State came out shooting 50% to start the game, leading 10-3 at the first media timeout, something they haven’t done in their last three games, all of which they lost.

The Bears found themselves on the upside of several runs in the first half: a 9-0 run to start, a 7-0 run in the middle and a 10-2 run to end out the half.

They received Ford’s message on Saturday loud and clear. Players were diving after loose balls, grabbing the offensive rebounds and creating second-chance looks.

“If you’ve got any ounce of competitiveness inside your body, then when someone says it doesn’t mean nothing to you, I hope that would inspire,” Ford said. “And I think it meant a little more to them tonight.”

Senior Keandre Cook came off the bench with nine points, including a steal, drive and jam with 1:20 left in the first half.

Owens hit a jump shot right before the half – his one and only bucket of the night – to give the Bears a comfortable 42-26 lead heading into the locker room.

Missouri State came down with 20 rebounds in the first 20 minutes, 11 of which were offensive rebounds. Illinois State, on the other hand, only had 11 boards in total at the half.

The Bears began the second half on an 11-3 run, nine of which came from senior Tulio Da Silva.

Over the next few minutes, Missouri State put on a dunk contest. Slams off the glass came from da Silva, senior Lamont West and juniors Gaige Prim and Josh Hall.

Missouri State continued to take advantage of Illinois State’s lack of defense and drove home a win backed by a season-high 54 points in the paint.

Da Silva had his best offensive game, recording 22 points, his first 20+ point game of the season. Last season, Da Silva had four games of the sort.

“I thought he did a good job of making himself available,” Ford said. “That’s Tulio Da Silva we saw today. He was playing hard tonight, and that was good to see.”

Ford said Cook showed more passion on Wednesday than he had in past games as well. With 12:22 to play in the second half, freshman Ford Cooper Jr. missed a triple, and Cook came swooping in from the top of the key for the putback.

That hasn’t been the norm for the Bears as of late, and Ford credited his players for showing up and playing hard.

Prim made the most of his limited playing time, scoring 12 points in 17 minutes. Ford said the soreness in Prim’s leg returned and decided to load manage his time because of the score.

While Wednesday’s game was a breath of fresh air, it was hard to tell whether the Bears were playing well because they’ve turned a page or because the Redbirds are struggling.

Missouri State is 5-6 in conference action, ranked eighth in Valley standings. Despite being in the bottom half of the league, the Bears sit just two games back from third place. They have seven games left to wiggle themselves out of a Thursday play-in game for the championships in St. Louis.

The Bears will travel to an 8-3 Southern Illinois on Saturday. The Salukis are 10-1 at home, whereas the Bears are 2-7 on the road.