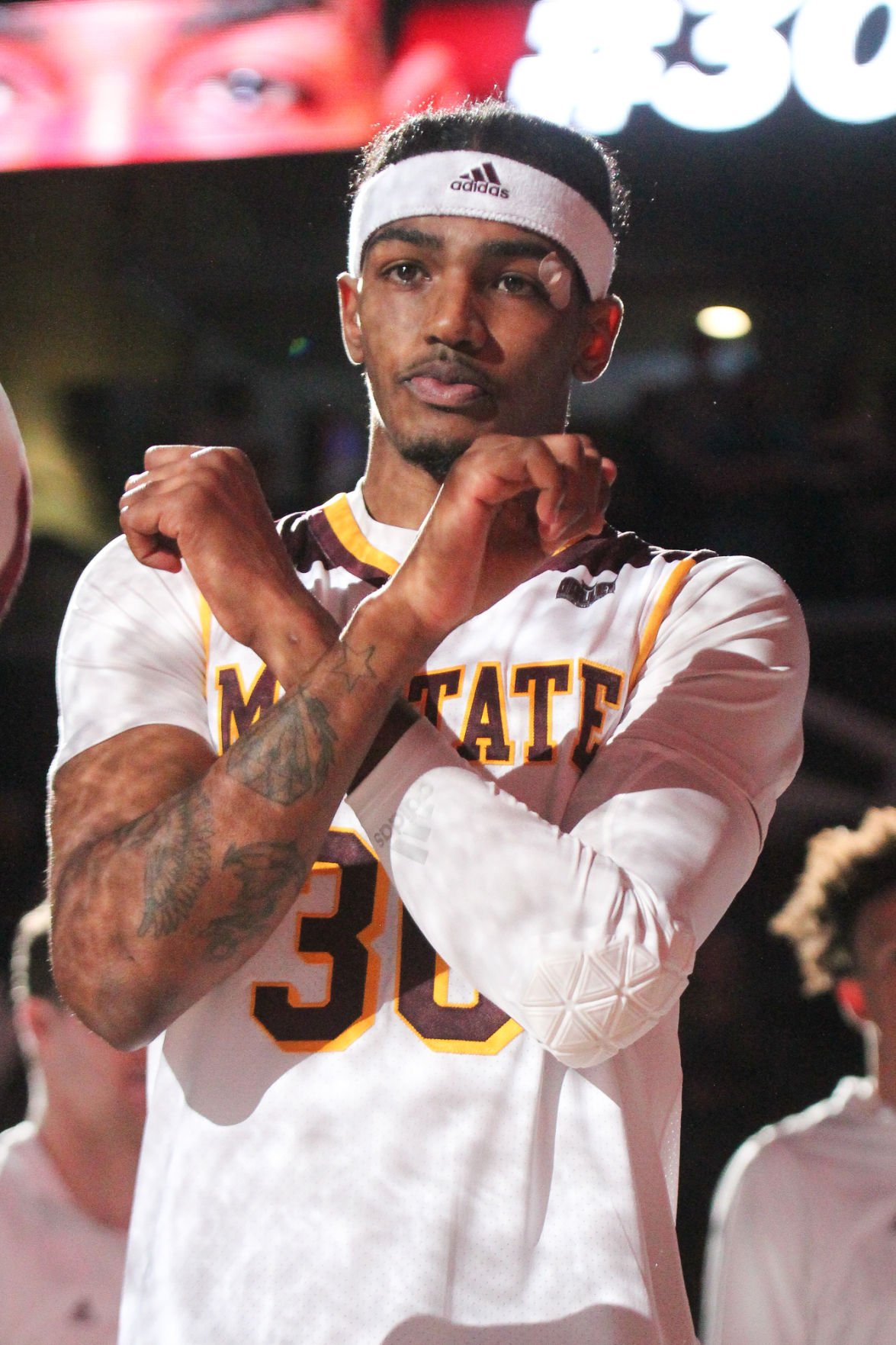 Tulio Da Silva is announced in the starting lineup. 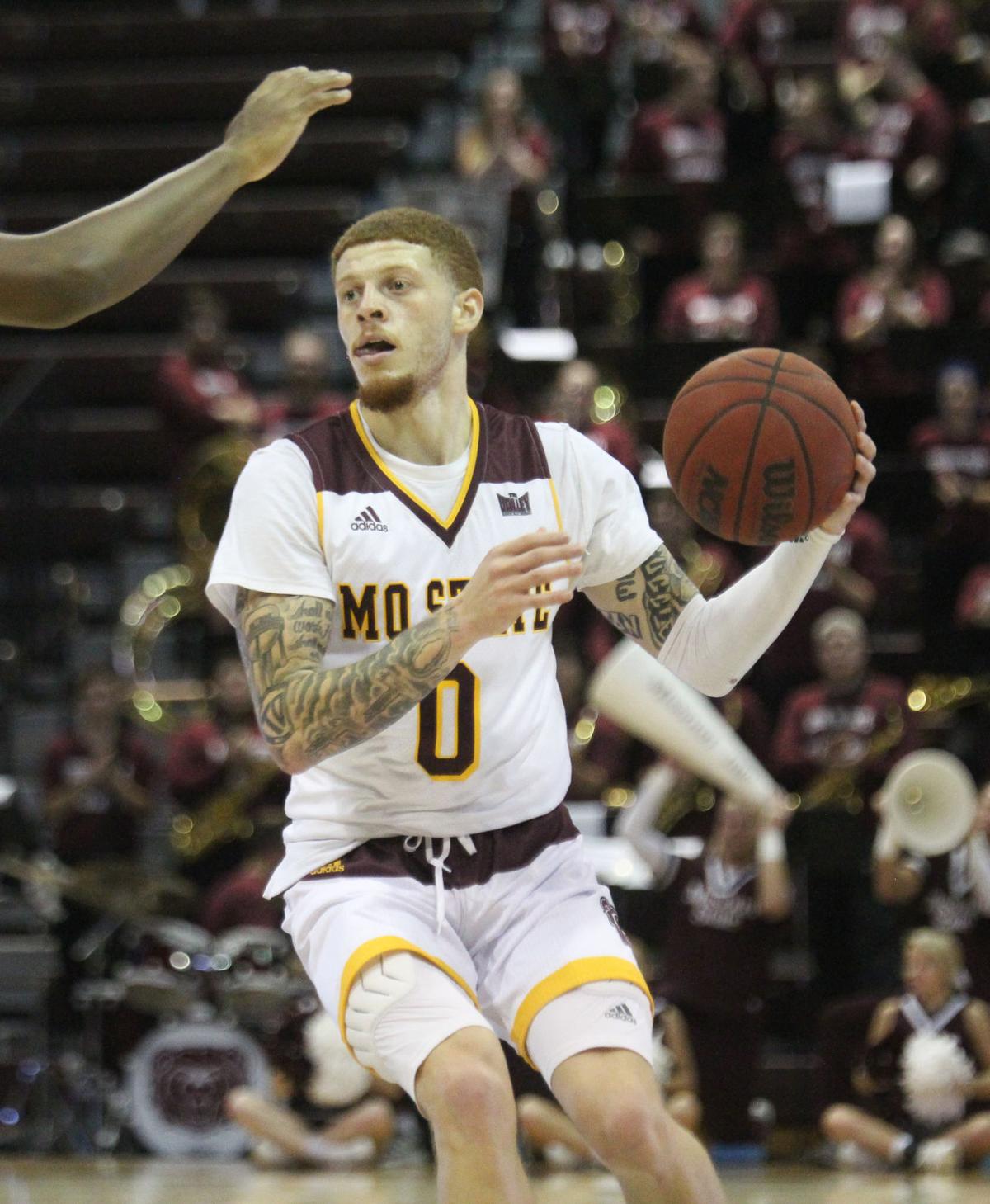 Tyrik Dixon looks for a pass. 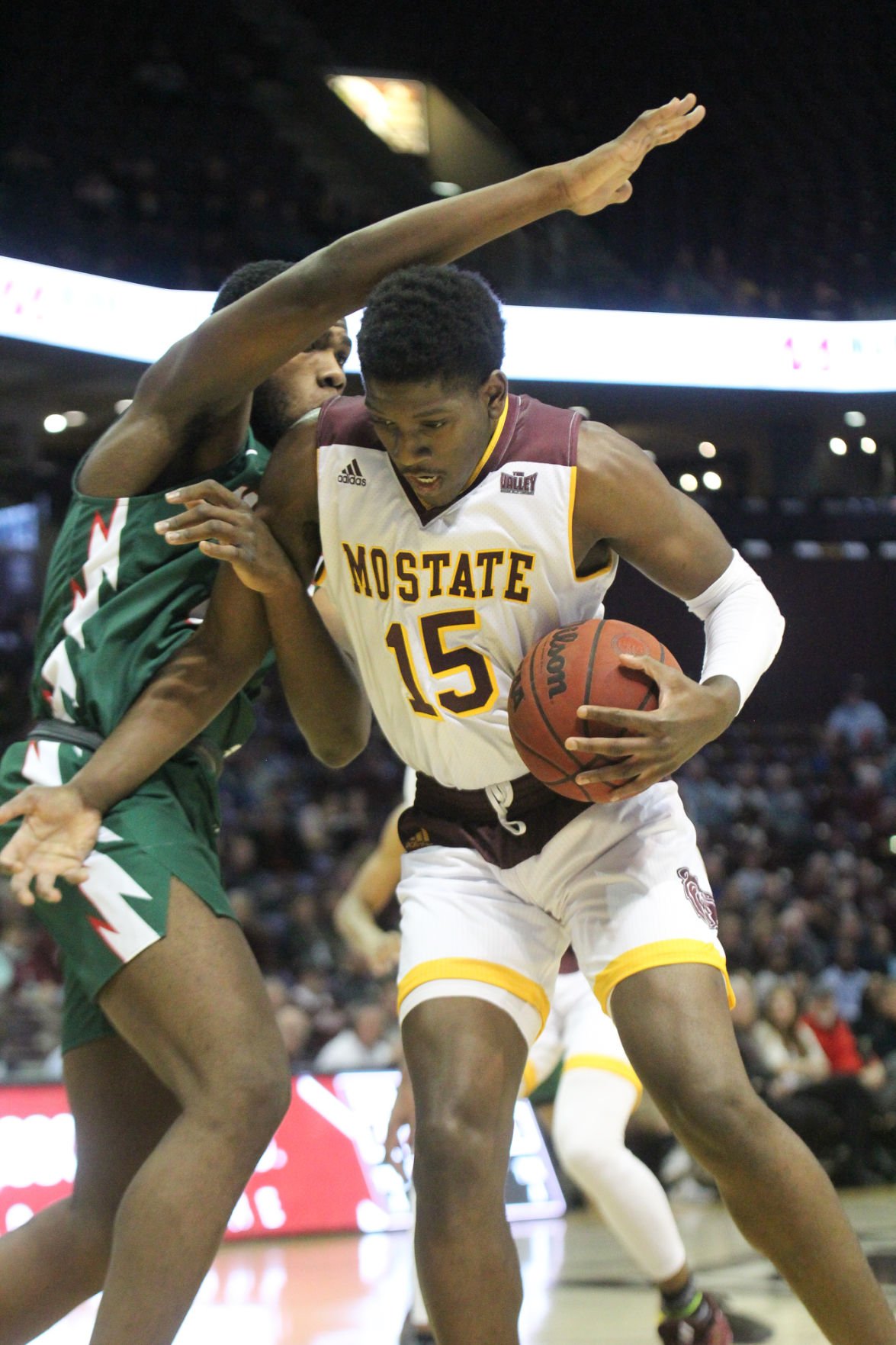 Lamont West takes the ball into the paint. 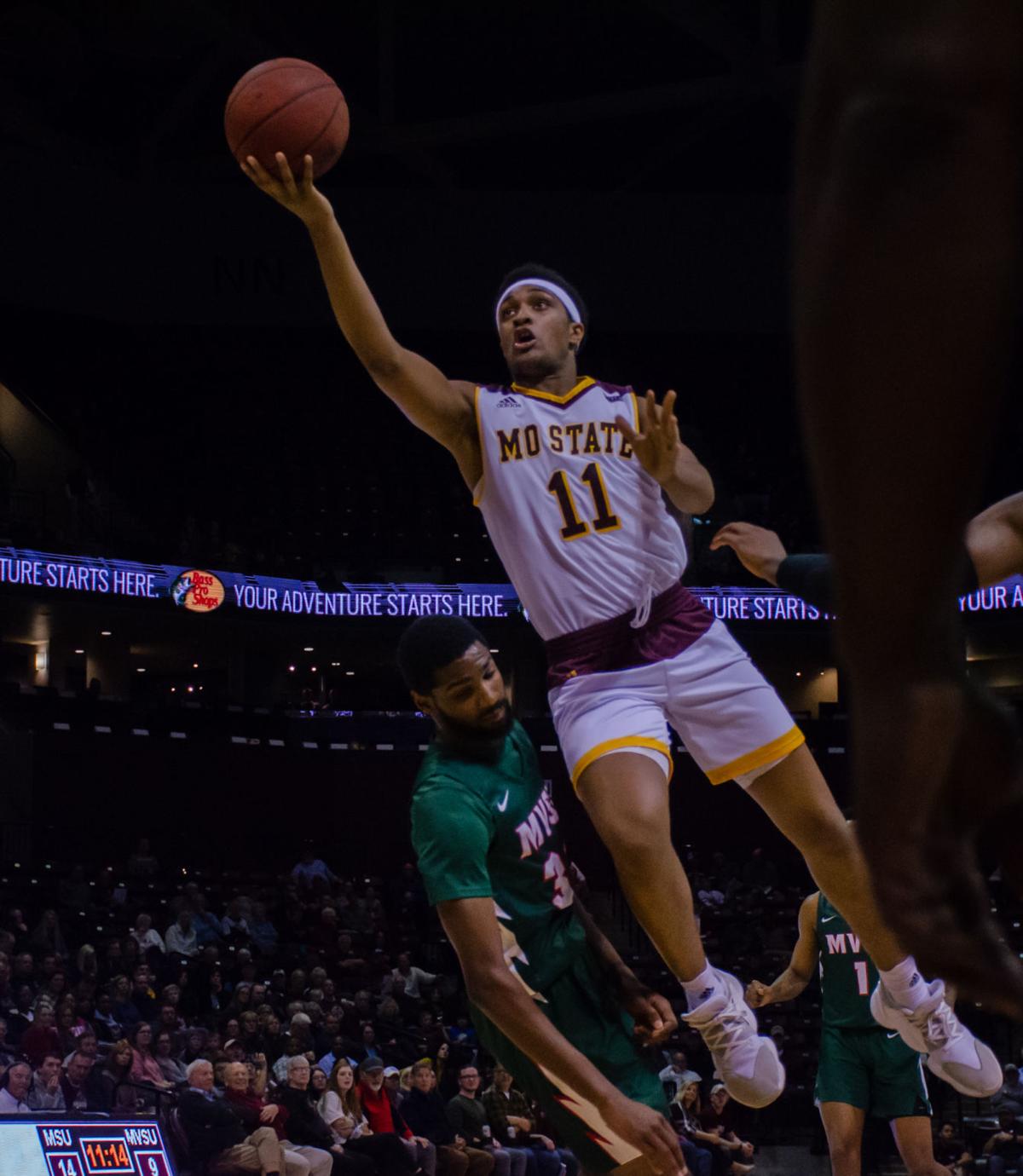 Freshman Isiaih Mosley jumps and shoots the ball over his Mississippi Valley State opponent. The Bears beat the Devils 86-62 at JQH Arena on Dec. 6.

Tulio Da Silva is announced in the starting lineup.

Tyrik Dixon looks for a pass.

Lamont West takes the ball into the paint.

Freshman Isiaih Mosley jumps and shoots the ball over his Mississippi Valley State opponent. The Bears beat the Devils 86-62 at JQH Arena on Dec. 6.

Another slow first half for the men’s basketball Bears, but head coach Dana Ford said he’s going to build off a solid second half from his team.

“Second half, I thought we did a better job taking care of the ball and getting on the offensive glass a little bit as well, not just jacking up outside shots because we were wide open,” Ford said. “(It was) just something to build off of second half.”

It was another slow game in JQH Arena to start, though. Mississippi Valley State stuck with Missouri State through the first three minutes, tying it at four before MSU took off on a 10-0.

Three turnovers in a row gave the Delta Devils a chance to bring it within one, but senior Tyrik Dixon hit a 3-pointer — his only score for the first half — and the Bears held at least a five-point lead for most of the first half.

When the Bears jumped up to a 10-point lead with 3:42 left, MVSU kicked into a different gear. The Bears had five turnovers, two missed shots and a missed free throw while the Delta Devils dwindled the lead.

“We were just playing down to the competition, and I feel like we weren’t taking them as seriously as we should,” senior guard Lamont West said.

The second half showed what many have come to expect: the Bears played a dominant final 20 minutes.

“I don’t want to take any credit for how they came out in the second half,” Ford said.

Dixon started it off for MSU, swiping two steals for two scores within the first two minutes. On the next play, senior Tulio Da Silva missed a jumper, rebounded it and passed it out to Dixon outside of the arc. Dixon put up a shot to make him the first Bears player in double digits against MVSU. He ended with 15 points, only missing once from the field the entire game.

“I thought (Dixon) played a good floor game all throughout,” Ford said. “I did think he played a solid game tonight — his stat line was great, and he’s starting to make some progress.”

With 16:21 left in the game with an 11-point lead,  Da Silva left the game. It appeared he landed on someone else’s foot and rolled his right ankle. He received help off and headed into the tunnel. Da Silva re-entered the game about four minutes later after walking out of the tunnel on his own. He played about four of his 24 minutes after returning with the injury that still appeared to bother him as he played.

In one instance, he was waiting on a free throw from MVSU and rolled his ankle around. He also ran with a slight limp.

As the game neared its end and MSU held a 20-point lead, Ford opted to put in players who haven’t been in his usual rotation, including redshirt junior Spencer Brown, senior Ross Owens and sophomore Darian Scott. He kept in senior Keandre Cook, who earned his first double-double of the season. It was the Bears’ first 20-10 since Tulio Da Silva did it on Jan. 12 last season at Bradley.

With 33 seconds on the clock, Brown sunk a triple from the corner. The bench — and the crowd of 3,552 — erupted for the most energy they’d had all night.

“It’s indescribable — there’s nothing like it, making that and then the whole crowd going crazy,” Brown said with a smile. “It’s nice to be on the other side. I enjoy cheering on (Cook) shooting contested pull-up 3s to seal the game or Lamont making wide-open catch-and-shoots, but it’s nice because I know they’ve got my back. We’re a close group, and that shows it.”

Da Silva was seen on the bench celebrating and jumping up and down on his uninjured left ankle.

Missouri State won 86-62 and put its record at .500. Faster play and four second-half turnovers proved to Ford that his team is a good team, but only if they want to be.

“We just have a team that currently plays to the level, and they’re going to have to learn good, hard lessons,” Ford said. “It’s a situation where your heart goes out to them because they can be so good, but they’re choosing not to be. So, God bless them — I don’t know what kind of team this is here at Missouri State, but if that’s the story they want to write, God bless them.

“They’re gonna get prepared for every game, every opponent with an unbelievable amount of passion and effort and detail, and then they’re gonna go out there and try to do what they want to do. … If they wanna play to that level and be close, and play with fire and come up on the short end of the stick when they’re not supposed to, then God bless them.”

The Bears host one more game at JQH before the semester is officially over. Arkansas State will visit at 7 p.m. on Dec. 11. The Red Wolves are 6-2 and will play Tulsa at 2 p.m. on Dec. 7.

Junior Gaige Prim did not play tonight due to being load managed, according to Ford, and he is expected to play against Arkansas State.

Valuable minutes add up for a Bears win

The Missouri State men’s basketball team had one of its most complete games of the season Wednesday at JQH Arena.

Bears pull out win thanks to late leadership

Leadership — or a lack thereof — was head coach Dana Ford’s reason for the Bears’ success tonight. But it was also a reason for their shortcomings.

After suffering a heartbreaking loss at Southern Illinois last week, the No. 22 Missouri Sta… Read more

Ice Bears try to battle out of slump

It has been two months since the No. 36 Ice Bears last skated off the ice having won a game … Read more