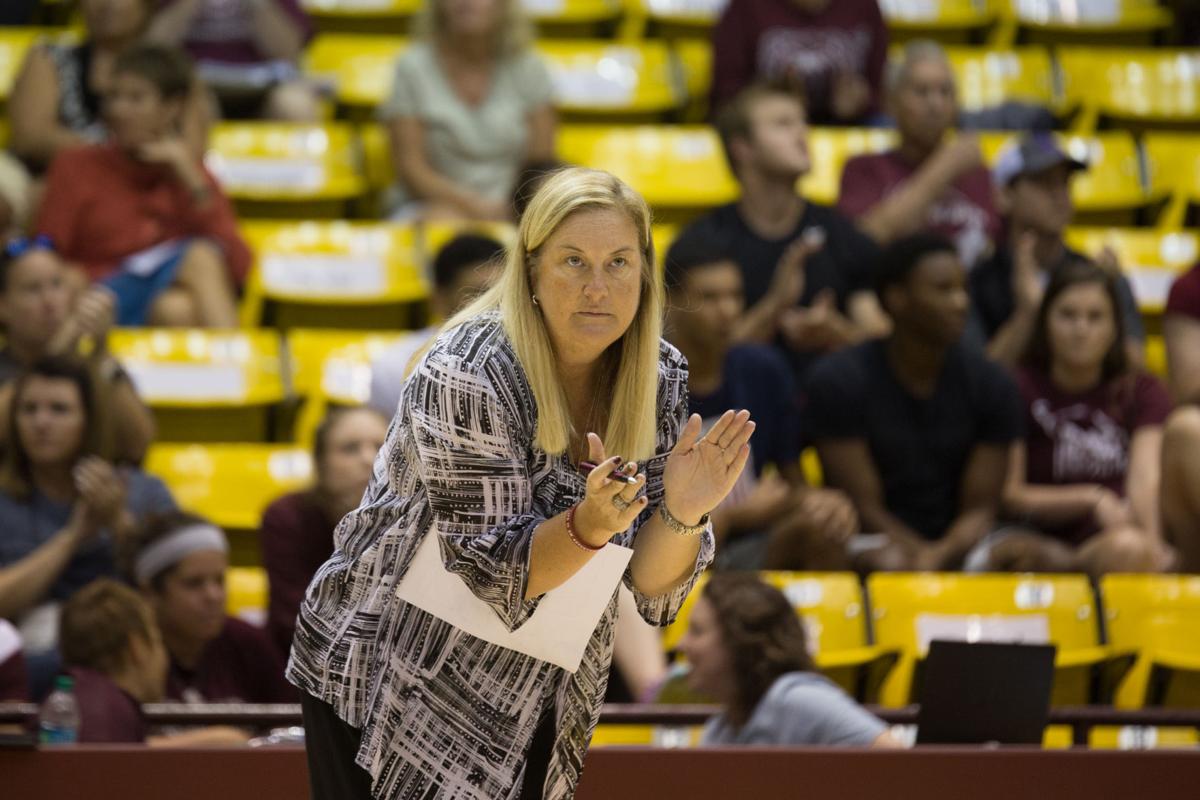 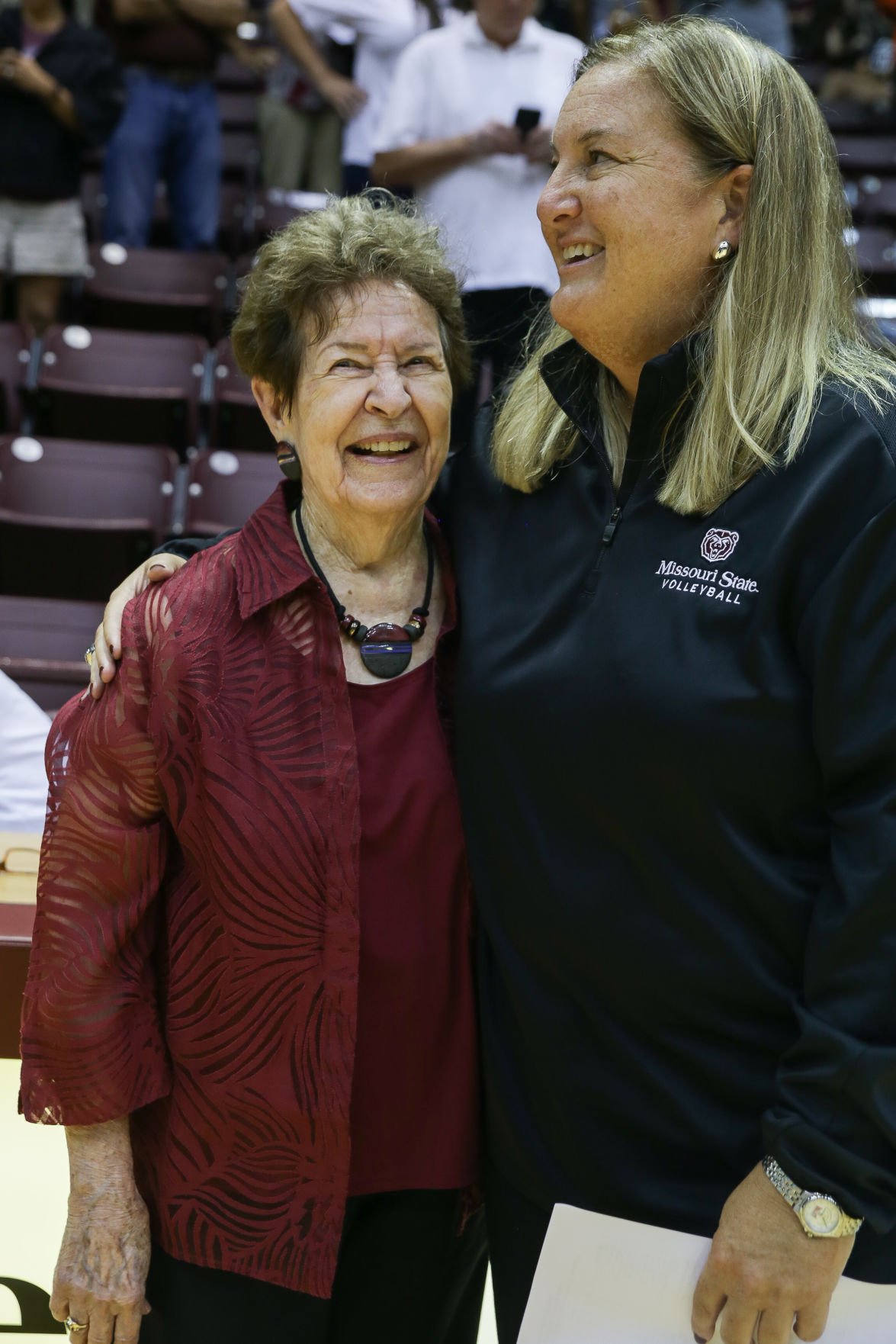 Mary Jo Wynn caught up with head volleyball coach Melissa Stokes, whom Wynn hired while in her role as women’s athletic director.

Wynn has been a part of Missouri State’s history since she started attending the school. She graduated in 1953, and went on to create women’s athletics programs for the schools.

Mary Jo Wynn caught up with head volleyball coach Melissa Stokes, whom Wynn hired while in her role as women’s athletic director.

Wynn has been a part of Missouri State’s history since she started attending the school. She graduated in 1953, and went on to create women’s athletics programs for the schools.

Stokes remained quiet over that time, saying she didn’t want to be a distraction to the athletes or the program during their season.

On Jan. 23, Stokes spoke publicly for the first time to give her side of the story, providing the details about three violations, her role during the investigation and why she ultimately chose to  resign.

“I will not speak ill of the university or any members of the university,” Stokes said to an audience of youth volleyball program supporters at the Library Center in Springfield last week. “I loved being a Bear and bled maroon and white. I am grateful for the opportunity to have been the Missouri State University coach for 23 years.

“The allegations against me are not the reason I resigned from my position.”

The Springfield News-Leader’s story goes in-depth on the violations, but here’s the gist of what she said:

Of the three NCAA violations, Stokes admitted to only one: the accusation that she allowed her players to take part in summer camps.

“I let them play as campers and player-coaches,” Stokes said. “I take full responsibility for that.”

But Stokes did disagreed with the other two allegations.

As to the NCAA investigation into players receiving free-or-reduced housing on rental properties she owned, Stokes said four or five players stayed in a house belonging to her and her father.

During that time, some student-athletes needed between a few days and a couple of weeks to stay before they could move into permanent housing. Stokes said she never tried to conceal the arrangement and the student-athletes were charged an appropriate amount.

"I do not believe I ever violated any NCAA rules relating to housing and student-athletes," she said.

The other allegation involved taking an incoming athlete to Europe. Stokes said the interpretation of this new NCAA rule that allowed these type of players to take trips was difficult because of the circumstances.

For eight months, the university was without a full-time assistant athletic director for compliance. The Assistant AD for Compliance typically assists coaches in determining eligibility issues, what is proper and what is prohibited under NCAA rules.

Stokes said Missouri State had clearance on five of the six players and was working on getting the sixth.

“As we were getting final clearance on the last individual, not one university official ever called me, emailed me or texted me that the student-athlete should join the team for the trip,” Stokes said.

The incoming athlete was not allowed to play or even sit on the bench once the team arrived in Europe. Instead, the athlete sat in the stands in street clothes.

Stokes said she fully intended to fight the allegations, but the way she was treated by the school when she was placed on leave in July left her feeling there was no use to fight for her job.

"I was never told or provided a list of the specific allegations or who made them," she said. "I was simply placed on leave, asked to turn in my keys and asked to leave campus. The answer was clear. I was not supposed to be at Missouri State anymore."

The announcement came after an independent investigation was conducted by Spencer Fane LLP.

“I think you have to set the emotions out of it and understand, ‘I don’t care how many games you have won and how long you have been here,’”  Moats said during a press conference on Aug. 12. “We are going to do things the right way.”

Officials said while there were no allegations of wrongdoing against any players or assistant coaches, the school’s NCAA compliance department bore no responsibility.

But where were they when the team was in Europe last summer while Stokes was attempting to get final clearance on the incoming athlete?

Moats, who prides himself on “doing things the right way,” hired controversial football coach Bobby Petrino who has enough baggage to take the Titanic down.

Not even a year removed from Stokes’ departure.

I’m a firm believer in second chances, and I believe Petrino will be successful at Missouri State. However, it’s mind-boggling that administration turned their backs on Stokes and didn't give her the benefit of the doubt in the investigation.

Stokes was just one of the two longest-tenured coaches at Missouri State and helped maintain the winning dynasty of the volleyball program when she took over for legendary coach Linda Dollar in 1996.

Not only does Stokes have the most wins of all-time among any volleyball coach in Missouri Valley Conference history, but she led the Bears to 10 NCAA Tournaments.

And she had one losing season over her entire career.

In the process of all this, it can be argued the lack of administration support destroyed what was a very successful program.

Missouri State went 10-22 this past season for the worst finish in the program’s history, snapping a streak of 19-consecutive winning seasons — all of which were under Stokes.

As a result, the job has been turned down by at least three coaches, according to Hains.

It seems Stokes’ primary violation was a lack of administrative structure within the athletic department.