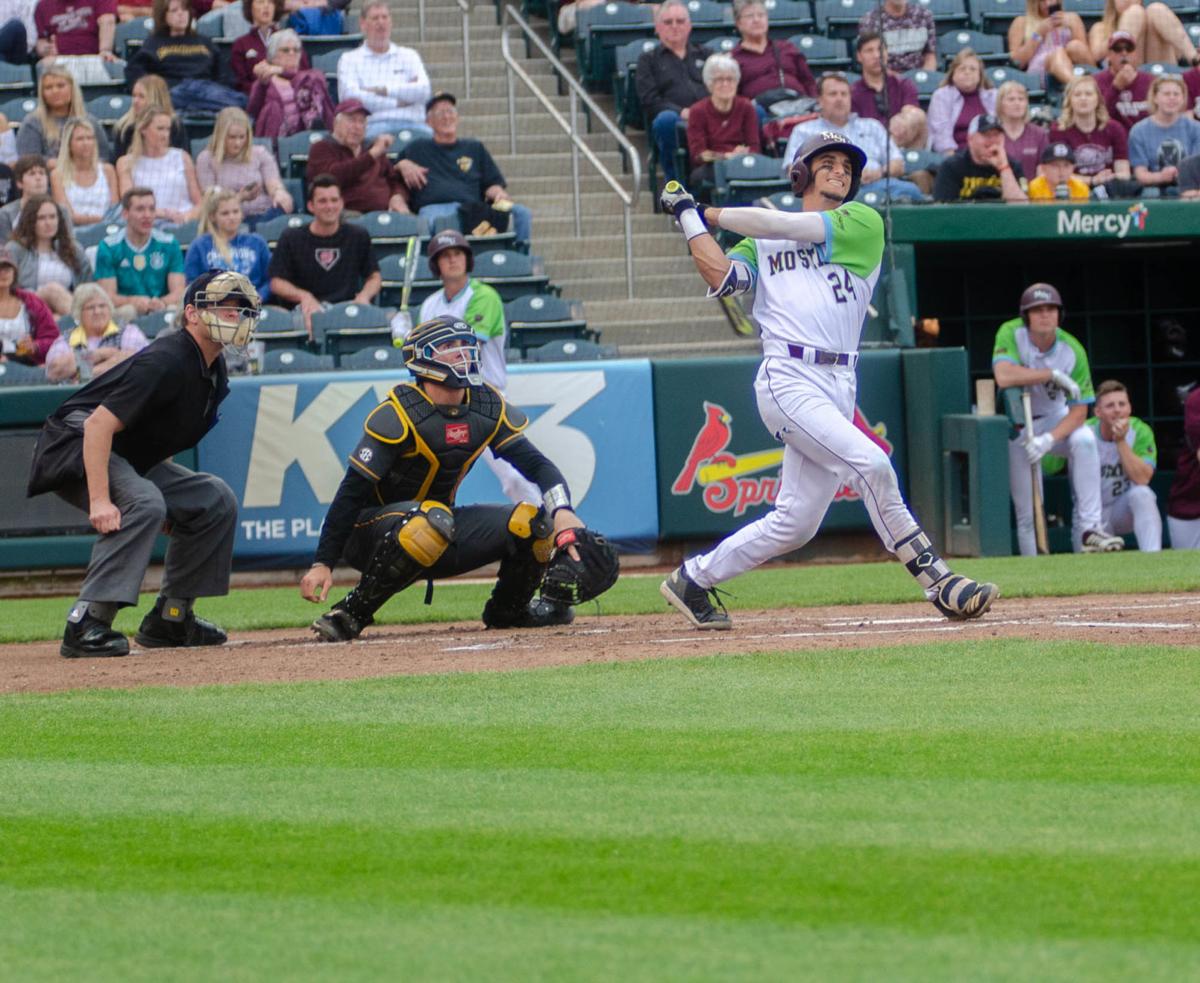 Drew Millas swings for a pitch. 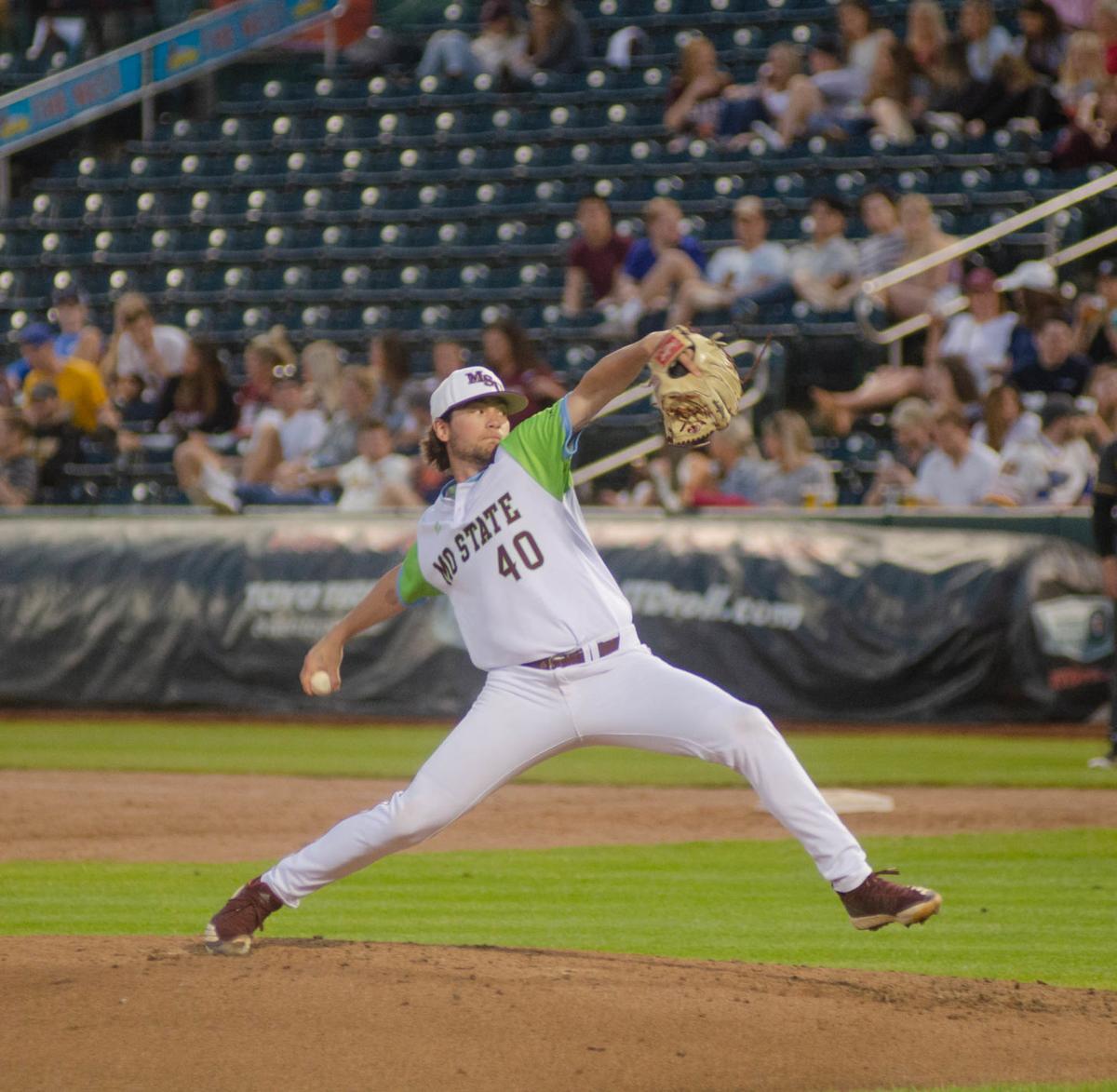 Zach Gibbs throws a pitch in. 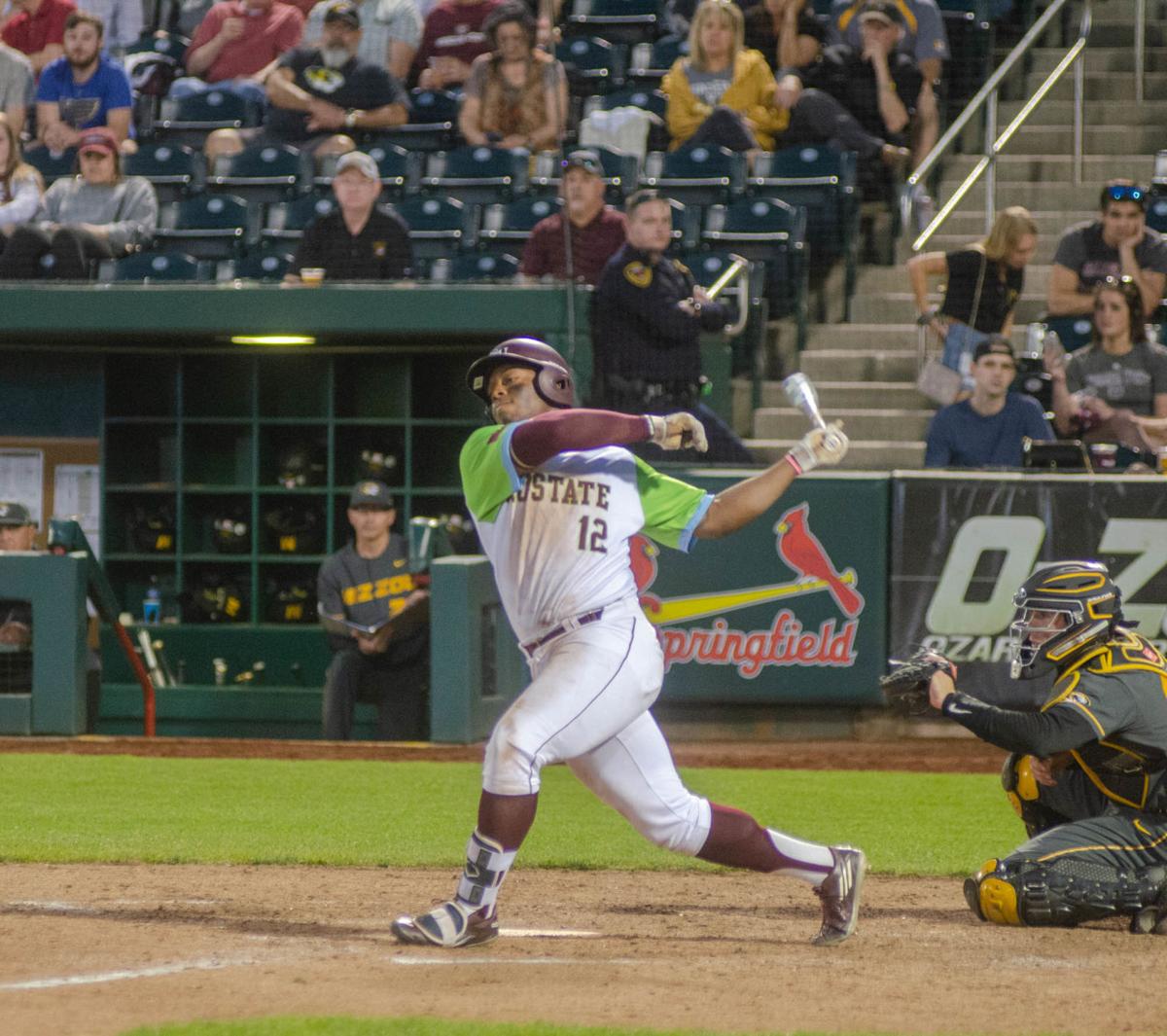 Anthony Herron Jr. swings all the way through.

Drew Millas swings for a pitch.

Zach Gibbs throws a pitch in.

Anthony Herron Jr. swings all the way through.

It was a bullpen kind of night, as all Bear pitchers gave up a collective 14 runs on 11 hits, only striking out six.

Though the mound wasn’t the only area of struggle for the Bears tonight. Missouri State’s 34 at bats only produced eight hits all night, including 14 strikeouts, three away from their single-game season high.

Freshman right-handed pitcher Forrest Barnes got the start tonight and held the Tigers scoreless for two innings, despite a few jams. In the top of the second, he bobbled a bunt but was able to the flip the ball to junior catcher Drew Millas for the tag at home plate.

The Bears got out of a bases-loaded pinch after Mizzou batter Clayton Peterson flew out to junior Logan Geha in left field.

Freshman fielder Anthony Herron Jr. got the Bears’ first hit of the night, a single into centerfield. John Privitera followed up with a triple down the first baseline, sending the ball into the right field corner.

Herron tripped and fell after rounding third base but was able to make it home to give the Bears their only lead of the night, 1-0.

Freshman pitcher Nick Schmidt replaced Barnes on the mound in the top of the third, facing four batters before being pulled after loading the bases.

Sophomore Zach Gibbs came in for Schmidt and walked the first batter, tying the game up 1-1. Gibbs gave up a bases-clearing triple to the next batter, giving the Tigers a 4-1 lead. A sacrifice fly gave Mizzou one more before Missouri State got out of the inning.

In the bottom of the third, sophomore infielder Joey Polak hit an RBI single, but Missouri State stranded two runners to send the game into the top of the fourth.

Gibbs retired the Tigers in order, but Missouri State still couldn’t get anything started offensively. Privitera hit his second triple of the evening but got caught in a pickle and was tagged out at home plate.

Half of the Missouri State crowd disappeared after left-hander Nate Witherspoon gave up a grand slam in the top of the fifth, blowing Mizzou’s lead open 10-2. Freshman Ben Cruikshank, the fifth pitcher to enter the game for the Bears, gave up a two-run home run over the left field fence in the top of the seventh, giving the Tigers a 10-run lead over the Bears.

Guttin looked to the bullpen again, this time for freshman right-hander Logan Thomazin. Thomazin became the sixth MSU pitcher of the night and the third pitcher to give up a home run — a solo shot from Mizzou hitter Connor Brumfield over the left field wall to put the Tigers up 13-2 in the top of the eighth. Another Tiger then scored on a sacrifice groundout to shortstop.

Left-hander Peyton Carson closed out the ninth, walking two and getting the field to work for the outs.

The Bears starting to rally in the bottom of the ninth. Tiger pitcher Lukas Veinbergs balked, sending home a Bear. A sacrifice RBI from junior Jack Duffy scored a fourth Bear run, and senior Ben Whetstone hit a two-run home run to right field. Missouri State cut the lead to 14-6, but it just wasn’t enough to secure a win.

Mizzou was able to capitalize on Missouri State’s young pitching tonight — five of the seven were freshman — and lack of offense for the 14-6 win.

“We just have to start playing better baseball,” Guttin said.

The Bears will host a nonconference series against New Orleans from April 18-20 before traveling to Columbia, Missouri, next Tuesday, April 23, for a Tiger rematch.