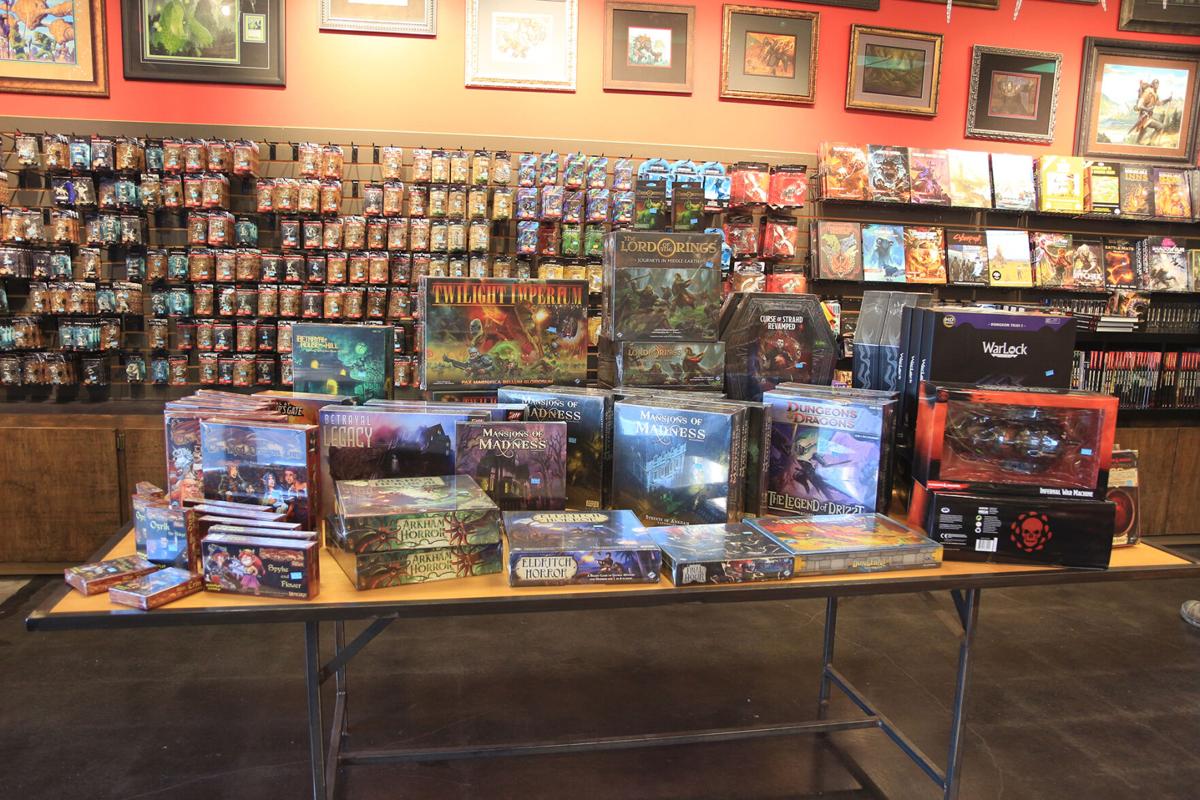 A display table at the front of Meta Games Unlimited Inc. features Warlock, Lord of the Rings and Betrayal at House on the Hill. Behind the table rests dozens of figurines for tabletop miniature games. 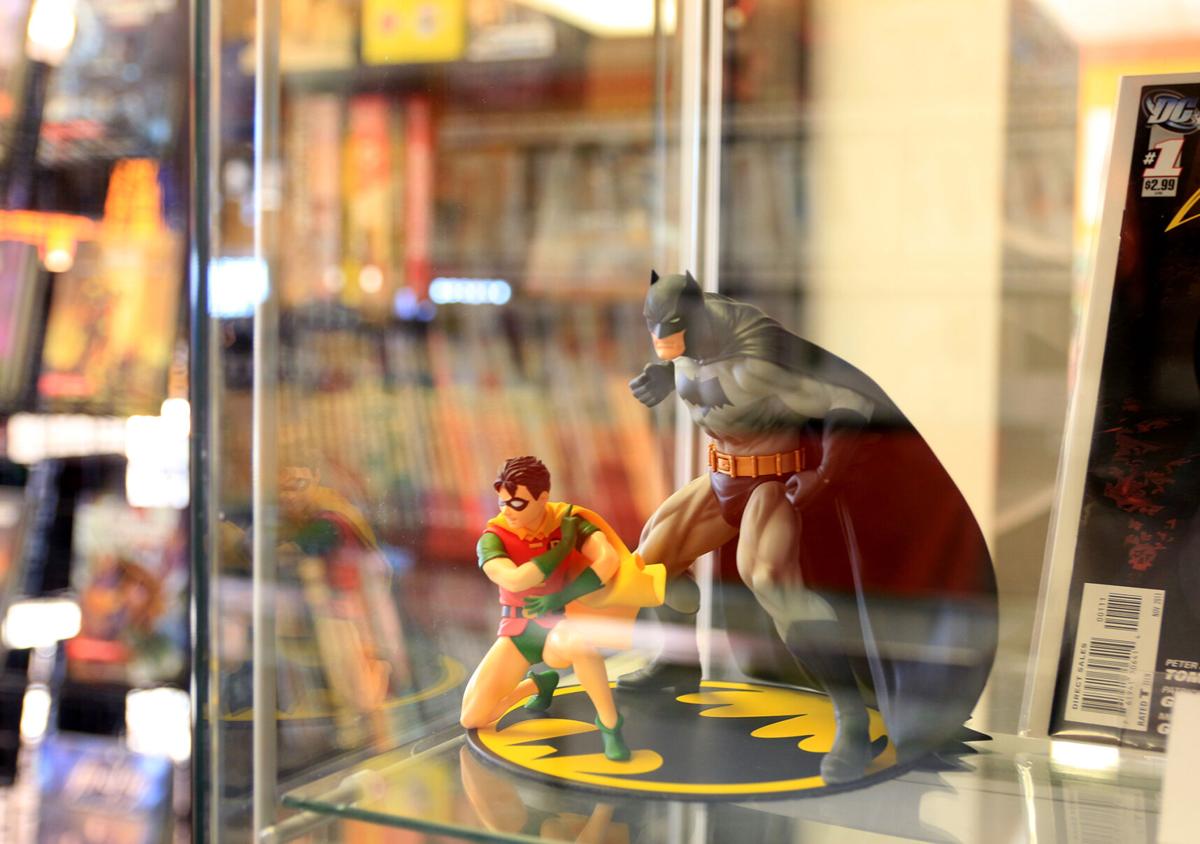 Nameless City features a wide variety of products, such as figurines, roleplaying games, graphic novels and more. The shop offers popular comic books, as well as obscure ones. 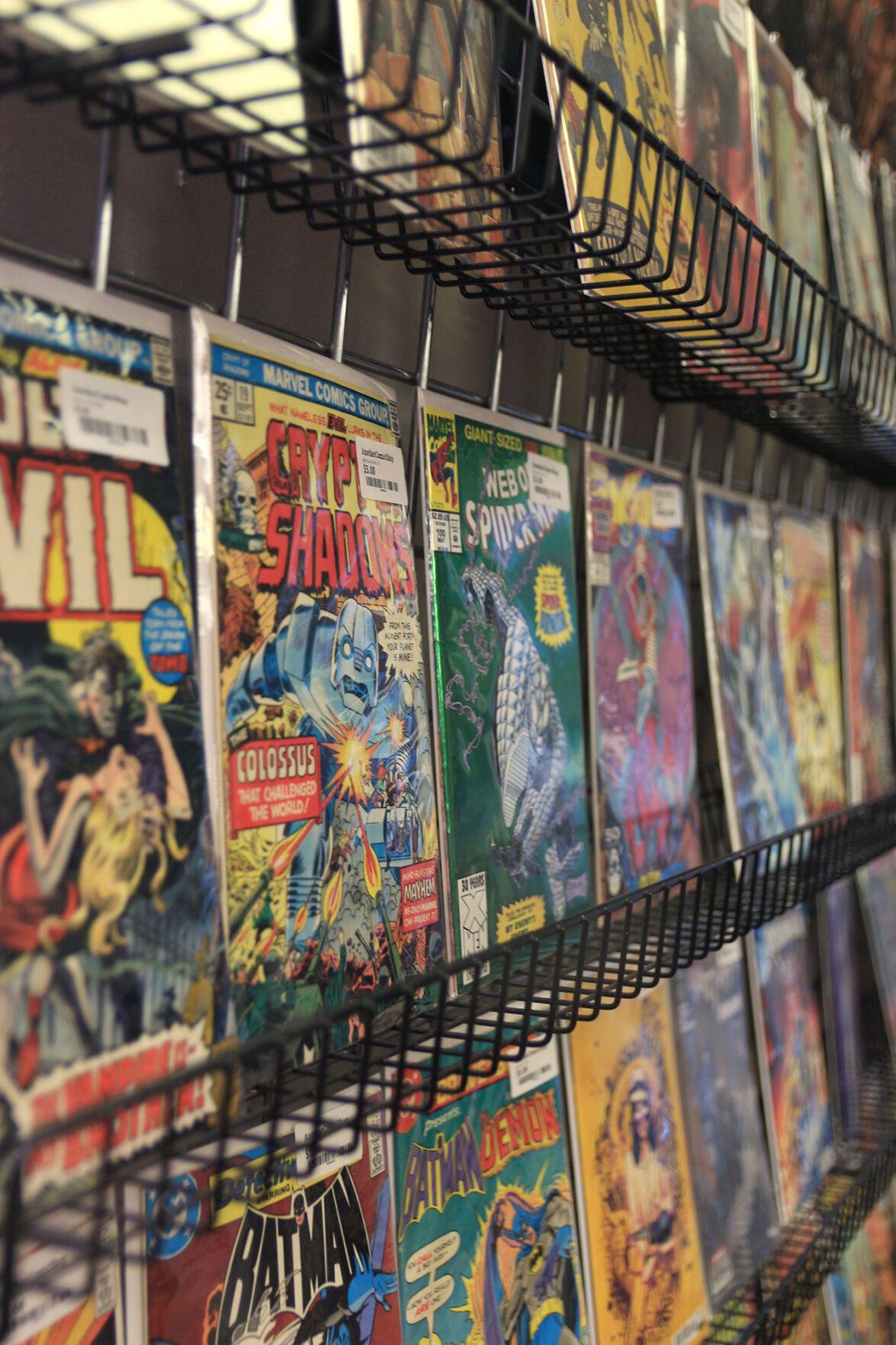 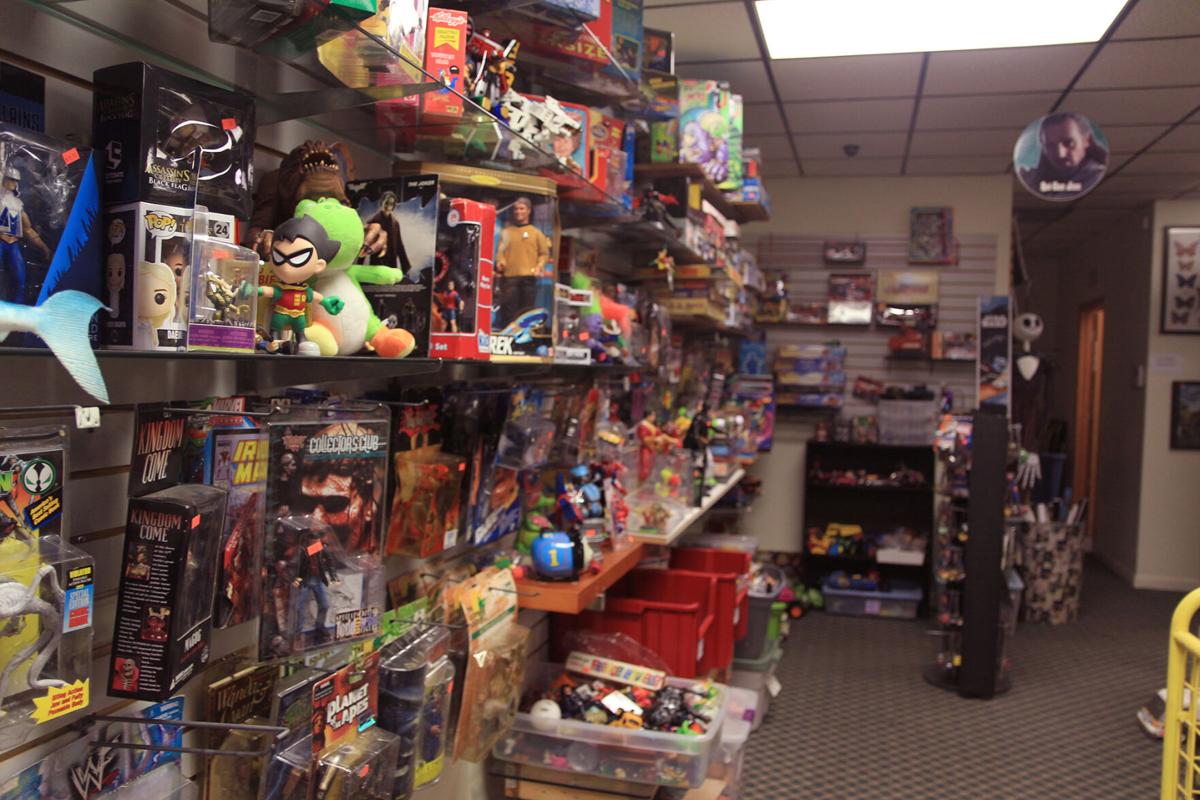 The sales floor at Rublemizers is snug and cozy. You can find lots of tubs, shelves and display cases, so you’re likely to find something new with every visit.

A display table at the front of Meta Games Unlimited Inc. features Warlock, Lord of the Rings and Betrayal at House on the Hill. Behind the table rests dozens of figurines for tabletop miniature games.

Nameless City features a wide variety of products, such as figurines, roleplaying games, graphic novels and more. The shop offers popular comic books, as well as obscure ones.

The sales floor at Rublemizers is snug and cozy. You can find lots of tubs, shelves and display cases, so you’re likely to find something new with every visit.

What was once a small group of friends buying comic books for only 50 cents and playing Dungeons & Dragons on school nights has now evolved into a growing pop culture phenomenon that celebrates geek culture. Comic book, toy and game stores have become increasingly popular markets, garnering a large following, with more stores popping up. For those wanting to unleash their inner nerd, the following are comic, game and toy businesses located in Springfield.

Rublemizers is tucked away at 3165 S. Campbell Ave. behind Seoul Oriental Market. The store has toys for the young and old, with no shortage of comic books, posters, action figures and games. The business has been around for 12 years but moved to its current location in the Young’s Plaza in February 2020.

The store has an eclectic atmosphere, and with a surplus of bookshelves and tubs to rifle through, it’s certainly the kind of place where you’d discover something new with each visit.

Danial Ruble, who runs the store as a hobby, said he prides himself on being able to cater to the crowd who doesn’t have a lot of money to spend on expensive toys or comics. One of the categories he specializes in is 50-cent toys and comics.  It’s what sets him apart from other local stores.

That, and his commitment to regularly rotating what he has on the sales floor.

Ruble’s register sits in the middle of the store, and he watches as customers peek into display cases or file through comic issues sheathed in plastic sleeves.

Ruble said all sorts of people stop in his store, but COVID-19 has cut into the usual traffic.

Rublemizers has a wide variety of products. Star Wars, Harry Potter, Lord of the Rings, Nickelodeon, Marvel and DC, Transformers, retro video games and sports collectables are just some of the many franchises Ruble carries. The store is open 1-6 p.m. Monday through Saturday.

Meta Games doesn’t sell very much in the vein of comic books and action figures. Instead, the business focuses on one main product: games. The store is located at 3309 E. Sunshine St.

The store itself is spacious and welcoming. Upon entering the front doors, customers are greeted by tall shelves stacked to the ceiling with board games, display cases with miniature figurines and a giant chandelier ornately decorated with Magic the Gathering playing cards.

Meta Games aims to sell more unique games, unlike the ones you’d see at traditional retailers, and are catered to adult consumers. In other words, you’d be hard-pressed to find Chutes & Ladders or Candyland at Meta Games.

Carl Morgan, an employee of around 20 years, said the cornerstones of the business are Magic the Gathering, roleplaying games like Dungeons & Dragons, board games and tabletop miniature games such as Warhammer. He said Meta Games exists to give enthusiasts a place to come and play.

“One of the things that helps set us apart a little bit is trying to go against the gatekeeping that some nerd culture stores do — we don’t want people to think they don’t belong,” Morgan said. “We can find something everybody can enjoy.”

Morgan said he’s happy to see many of the hobby’s barriers broken down over the last few years. He attributed media like Netflix’s “Stranger Things” and the webseries “Critical Role” as major players in bringing tabletop gaming into the mainstream.

COVID-19 has been both good and bad for the business. Morgan said the community has felt some hurt due to the virus because the store can’t host events.

The game room at the back of the store, which is larger than the retail space, doesn’t get much use these days. On a normal Sunday, Morgan said more than 100 people would be packed into the game room to play D&D.

Business has been good for board game sales, though, because Morgan said board games are a perfect quarantine activity.

Morgan said he thinks The Standard’s readers would enjoy Klask, a sports-oriented game inspired by air hockey and soccer. The game is hugely popular in Europe, Morgan said, but doesn’t have a large American following yet.

A small and homey store located at 1341 E. Kearney St., Another Comic Shop is a local geek haven. Originally from Springfield, owner Jeff Evans has managed the store for three years and has been in the comic book business for over 10 years.

Another Comic Shop specializes in selling back issue comics, figures, costume designs and more. To build up inventory, they buy, sell and trade all over the country, Evans said.

One of its most endearing characteristics is the store’s dedication to displaying local artists and comics from the Springfield area. Featured all over the walls, it is hard to find a spot where there isn’t a piece of art.

Prior to COVID-19, the store held artist signings and costume design events for the public. Evans said this year everything has been put off.

“COVID has impacted the store drastically,” Evans said. “We had to shut down for almost three months. Luckily, we did a lot of internet sales, so that picked things up for us.”

Despite COVID-19’s setback, Another Comic Shop has received a great deal of support from the community.

Growing up, Evans loved games and comic books, especially Mario Brothers, Sin City, Batman and Spiderman. For those wanting to start collecting or selling comic books, Evans said they should dive in head first and just do it.

Evans said he hopes people have a unique experience coming into Another Comic Shop.

“I want people to see something that they’ve never seen before,” Evans said.

Open 1 p.m. to 7 p.m. Wednesday through Friday and noon to 7 p.m. Saturday and Sunday,  Another Comic Shop is not something you want to miss.

In between a nail salon and aquarium store at 2244 Campbell Ave., Nameless City is a hot spot for everything comic book and game related. Upon entering, the store was warm, welcoming and neat.

Prior to being Nameless City, the store existed as Games, Comics, Etc. until Rob Wood took over as the owner a little over three years ago. Wood said he put the love and care into the store that it needed to be successful.

Nameless City, a reference to H.P. Lovecraft’s “1921” short horror story, is one of Wood’s favorite pieces of literature he read as a kid. Wood said he also loved to play historical war games growing up.

In the back of the store, gaming tables are tucked away. Wood said what used to be an almost nightly activity of groups gathering together to play games has been significantly impacted by COVID-19.

“There used to be only two nights a week where we didn’t have something organized,” Wood said. “On Sundays, there were always 30-50 people playing.”

People are just now getting back into group gaming at the store. Cardfight Vanguard, an anime card game, and BattleTech, a turn-based strategy video game, are some that groups have started playing again at Nameless City.

Wood said the crowd of people that have come into the store has been wildly diverse.

“I have met everybody from every stratas of society,” Wood said. “When I did it in the mid ‘80s, it was just us and our circle of weird friends. But now it’s mainstream, it’s pop and everybody does it.”

The store is open noon to 8 p.m. every day. For those interested in anything from Magic the Gathering cards to kid-friendly comic books, Nameless City is the place to check out.